In Praise of Fast Transit, Vital to Spreading Equality of Access in Large Metros – Next City

In Praise of Fast Transit, Vital to Spreading Equality of Access in Large Metros 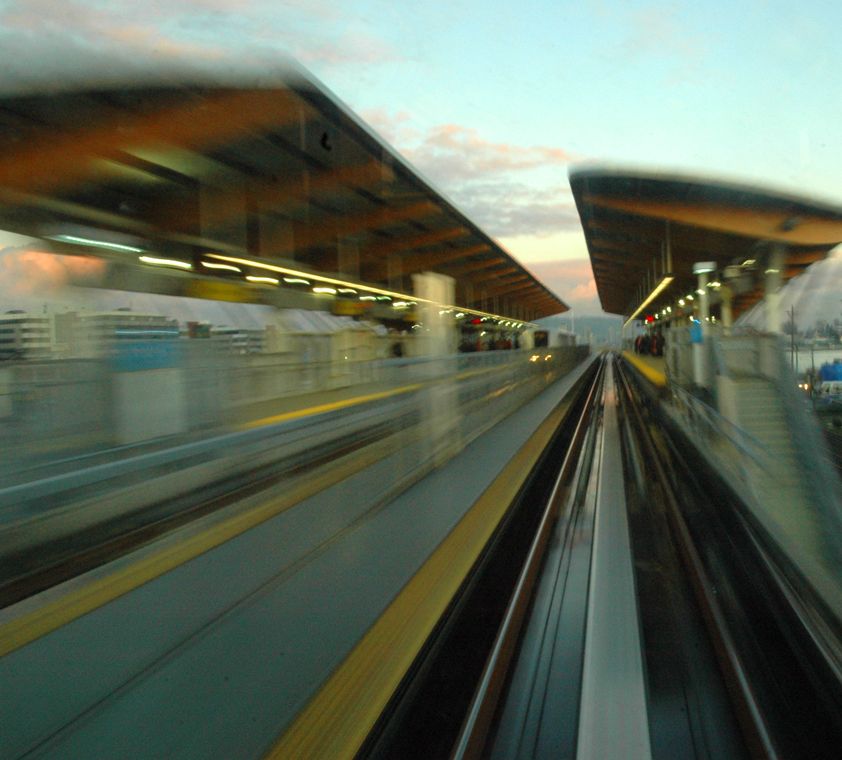 There are many metropolitan regions that are small enough that they can be traversed in a half-hour by car, even when avoiding freeways altogether. These are places where the commuting times of workers are physically limited by the fact that there simply are not jobs past a certain point, and where traffic isn’t concentrated enough to ever make congestion a problem.

Places that fit these conditions — most medium and small American cities fit the bill — offer their inhabitants access to virtually all jobs in the metropolitan area via automobile.

But the biggest regions, with populations of one million or more, are often too large to provide such easy mobility to their inhabitants. Sprawling growth makes getting from one edge to the other a time-consuming experience, while urban density and over-used freeway networks make congestion a major problem. Despite their immense populations and huge number of job openings, the difficulties of getting around in these cities reduce employment opportunities for a significant part of the workforce.

New York’s Southeast Queens is a case in point: despite being relatively close physically to the huge Manhattan business districts, average one-way commute times among all workers from the neighborhood are upwards of fifty minutes. Few subway stations, expensive commuter rail options, and a circuitous bus network spell long journeys to work for the neighborhood’s inhabitants.

This problem — repeated across the country — is especially serious for the poorer sections of every region’s population because job growth is typically concentrated in a region’s “favored quarter,” where the wealthiest inhabitants live, often far from affordable housing. The suburban dispersion of the poor, an increasing problem in both the U.S. and Europe, doesn’t help matters much — in fact, it may actually contribute to increasing the difficulty of finding a job. Thus, for low-income people, having strong transit links from one side of a big region to the other is essential to preserving equal mobility across income classes.

Focusing on the Broadway corridor, which connects the University of British Columbia to City Hall and the city’s SkyTrain rapid transit network, Condon suggests that the city has a choice: Build one seven-mile extension of the rail line, at a cost of $2.8 billion, or construct 110 miles of streetcars modeled on those in Portland, Oregon.

According to Condon, streetcars are the more sustainable solution because they encourage people to limit their daily travel distances and facilitate the creation of walkable urban environments. By spreading the streetcars across the city for the same price as just one rapid transit project, you can provide transportation alternatives for people throughout the city, rather than just in one corridor.

Condon’s philosophy is attracting mainstream adherents: After spending decades focusing almost entirely on providing transit capital funds to just the biggest, fastest projects, under the Obama Administration the U.S. Department of Transportation has show itself to be a big supporter of slow and cheap streetcars. Secretary of Transportation Ray LaHood has already announced grants for such projects in New Orleans, Detroit, Dallas, Tucson, and Portland — and he has established a special $280 million grant program specifically for inner-city “circulators.”

These kind of transportation tools are seen as essential to encourage the kind of “livable” communities that are the current ideal of many urban planners.

But, as Jarrett Walker points out at Human Transit, this argument only goes so far. For one, streetcars, as Condon freely admits, are slow, sometimes slower than equivalent buses, meaning that they won’t necessarily expand the ability of anyone to get around. In opposition to rapid transit, they do not benefit from entirely grade-separated rights-of-way. Meanwhile, Walker suggests that rapid transit stations, with huge numbers of users at all times of the day, are actually often better than limited-use streetcar stops at spurring development around stops.

More importantly, though, the limited speed of streetcar-type vehicles inhibits equity of access within a large metropolis like Vancouver. By advocating streetcars, Condon is implicitly arguing that people should stay in their neighborhoods for most of their trips; that they should find work, go shopping, and be entertained in their near surroundings. If people have to rely on slow transit, they simply won’t have the time to be making trips across the region. (Or, of course, they might switch to driving their private automobiles, which would defeat the point of the transit investment entirely.)

Though this approach would likely produce better ecological outcomes (less energy consumption per person as a result of reduced transport mileage), it would exacerbate spatial inequalities. Because jobs (especially well-paid ones) tend to be concentrated in the favored quarter, poorer inhabitants living far away from that zone would be isolated from employment opportunities and thus be deprived of chances for income growth. Or they would face devastatingly long commutes.

In the case of Vancouver, because the University of British Columbia is situated at the far edge of the region, providing only slow transit access to it basically shuts out a huge percentage of the region’s population to its benefits. If the Vancouver metropolitan area were smaller, it could be argued that streetcars could allow quick-enough transportation, but Canada’s third largest city spreads out over a huge area. Speed is essential.

I do not intend to suggest that the ultimate goals espoused by Condon are inappropriate: it makes sense to try to limit carbon emissions through a reduction in the use of vehicular transport, and encouraging walkable communities should be paramount in planning decision-making. However, without equality of opportunity throughout a large metropolitan region, the lack of fast transportation options could ultimately act as a stumbling block in working towards improved access to all.