In New Urbanism’s Inner-Sanctum, A Rift Goes Public – Next City 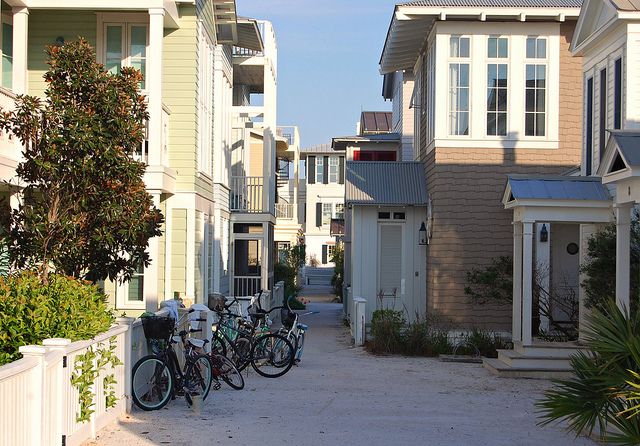 Daniel Solomon and Andrés Duany go way back. Twenty years ago this year, the two men, urban designers and architects now in their 60s, co-founded the Congress for the New Urbanism, along with Peter Calthorpe, Elizabeth Moule, Elizabeth Plater-Zyberk and Stefan Polyzoides. Given that, no one was much surprised when the two men both ended up on the bill as speakers at the organization’s 20th annual gathering held in West Palm Beach. But if anyone thought they were there to reminisce, they were in for a rude awakening, or at least a forceful one.

In relative short order, Solomon’s lecture, titled “My Dinner with Andrés,” moved from nostalgic waxing on the days when New Urbanism was debated over intimate dinners to a blunt takedown of Duany and his SmartCode, a template for creating zoning code in line with New Urbanist dictum. The California designer argued that the code — a bible for New Urbanism’s growing ranks of devotees — had diminished the creative energy responsible for its move into the mainstream practice of urban planners and policymakers around the world. Solomon described Duany as a man who was rigorous and defiant in his beliefs but, simultaneously, self-questioning.

“Andrés Duany creates an intellectual straightjacket that others wear, but that he won’t even put one arm in,” Soloman said. “This made me ask the question: If Duany doesn’t wear his straightjacket, why should we?”

Solomon went onto argue that the manual reinforces a “reductive certitude” like that of the Athens Charter relied on by CNU nemesis Congress International Architecture Moderne. (CNU was modeled after CIAM, in opposition to it.)

This was, needless to say, pretty harsh.

Ellen Dunham-Jones, an architect and the co-author of Retrofitting Suburbia: Urban Design and Solutions for Redesigning Suburbs, leapt up immediately, cheering and loudly applauding Solomon’s speech. While not a founder of the New Urbanism movement, she is a big player, and has just been named the Chair of the CNU Board of Directors.

To that, Duany came out on fire. He defended his “straightjacket,” stating that the code allows for local calibrations and adaptations. But his real argument focused on the fact that the real world is a world of laws, not a world of opinions and ideas. The same system that was used to destroy the urban form is the same system that can be responsible for fixing it.

He then defended those who love the suburbs. He described public involvement research exercises that involved scenario development. They would show people a picture of an idealistic, New Urbanism development and a picture of typical suburban sprawl. The former usually contained a compact, dense cottage with a picket fence and beautiful streetscape. The latter contained a plain house with garages for front doors sitting on large, empty streets, void of life. Despite the obvious attempt to sway opinion, 30 percent of people still chose the suburbs as their optimal place to live.

Duany is wise to recognize a substantial part of the population that still views a four-bedroom house with a two-car garage as the American Dream. For New Urbanism to stay relevant, it must address the marketplace. Futhermore, it is important to design for the needs and desires of the people who live and work in the suburbs, so that it becomes a socially and economically sustainable place. Enter Dunham-Jones, whose book chronicles efforts to modernize suburbs for a more efficient future. One retrofit at a time, she is keeping the movement relevant, butting egos aside.

The lesson for the rest of us: New Urbanism may be aging but that doesn’t mean its over. A little sparring is a sign of active chemistry; happy anniversary, CNU.

Erin Chantry is an Urban Designer in the Urban Design and Community Planning Service Team with Tindale-Oliver & Associates. Some of the material included in this post previously appeared on her website, At the Helm of the Public Realm.