In London, Step out of One Bubble and into Another – Next City

In London, Step out of One Bubble and into Another 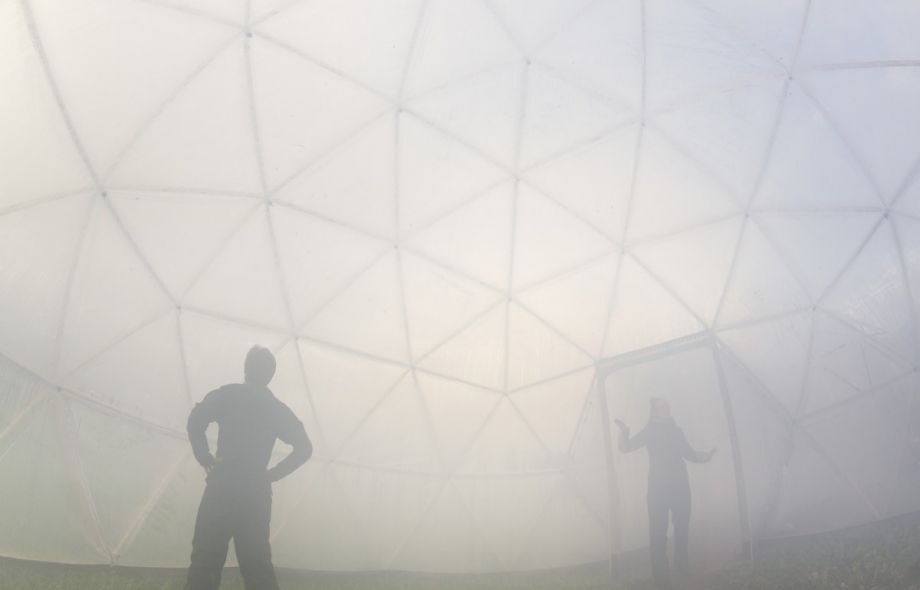 Breathing in polluted air may not be on your bucket list, but brief encounters with some of the world’s most toxic atmospheres are proving irresistible to visitors entering the “Pollution Pods,” a new installation that opened April 18 in the courtyard at London’s historic Somerset House, the Guardian reports.

Each of artist Michael Pinsky’s five linked geodesic domes contains a carefully replicated “artist’s approximation” of the polluted air in cities such as London itself, Beijing, São Paulo and New Delhi. In this work, the British artist attempts to “raise awareness of the problem of pollution around the world.”

Visitors follow their noses from pod to pod, comparing the relatively pristine island air of rural Tautra, Norway, for example, with the humid smog of New Delhi or the eye-watering air in São Paulo, acrid from millions of cars spewing ethanol fumes.

Pinsky developed the air in each pod with the help of scientific research and a London “scent expert.” The air in the “Pollution Pods” installation is so realistic that it comes with an advisory for visitors with respiratory conditions.

The “Pollution Pods” were commissioned for Climart, a multidisciplinary research project based in Norway that is studying ways in which climate-related visual art can affect people’s perceptions of climate change. It’s one innovative approach to the issue of polluted air, which is being addressed by cities around the world in myriad ways.

In Salt Lake City, Utah, for example, temperature inversions (layers of higher-elevation warm air trapping colder air below, along with pollutants from car and factory emissions) create unhealthy smog conditions. So in January, a government partnership funded a free fare day on all public transit. The idea — to get greenhouse-gas-spewing cars off the road during smoggy conditions — was a success, with officials reporting a significant bump in public-transit use. Similar policies have been used to positive effect in both Seoul and Brussels. And last year the mayors of 12 large cities around the world — including Paris, Vancouver, Mexico City and Quito — announced plans for pedestrianized “emissions-free” zones to combat localized air pollution and wrestle with the ramifications of climate change.