In Joplin, a Model for Economic Recovery from Natural Disaster – Next City

In Joplin, a Model for Economic Recovery from Natural Disaster 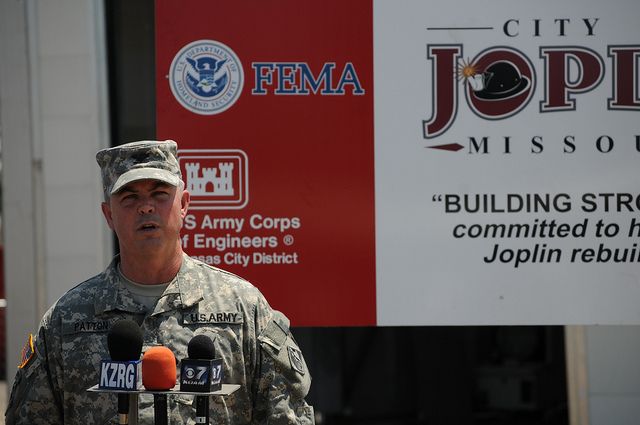 The tornado that ripped through Oklahoma City and nearby suburbs yesterday has left at least 51 dead and 145 injured, a number that is inconclusive as families and officials are just beginning to discover the breadth of the devastation. Sadly, this is the time of year that cities in Tornado Alley are on high alert for the violent storm systems that can wipe out neighborhoods in an instant. Two years ago tomorrow, 160 people were killed in a wild tornado that tore through the town of Joplin, Missouri.

The Joplin tornado was estimated at $2.8 billion in damage, the costliest tornado since 1950. The southwestern Missouri community still bears the emotional wounds of that Sunday in May two years ago, but the City Council approved a 3,100 acre tax increment financing (TIF) district in December that should help the city rebound without leaving the public saddled with debt. Tax increment financing, which Mark Bergen wrote about in an August 2012 Forefront story, is one way to guarantee a revenue stream for projects in a specific district without pulling from a municipality’s already-strained general fund. It’s a subsidy that pulls from the value created by the development itself. While the specifics of each deal vary, the basic idea is that a portion of the property tax revenue and sales tax revenue from the TIF district go right back into the redevelopment. In Joplin, the TIF will last 23 years.

Wallace said the Joplin project is for about $1.9 billion in rebuilding. Trisha Patton from the Downtown Joplin Alliance said that they haven’t seen “any shovels in the ground” yet, but the response to the new district has been positive. TIFs were not greeted as warmly in post-Katrina New Orleans, where they were shot down by the Bureau of Governmental Research, even though they had been approved by City Council in 2009.

“Your heart goes out to people that experience this type of devastation, whether it’s Joplin or Oklahoma City or Tuscaloosa — you name the city,” Wallace said. “Unfortunately we know it will happen again in another city, but what this [TIF] does is it enables a community to rebuild itself in a self-sufficient manner.” It’s too early to tell how bad the toll in Oklahoma City, where the majority of the damage was done in the suburb of Moore, will be. But Joplin’s young TIF plan could be a new framework for cities in the wake of disaster.