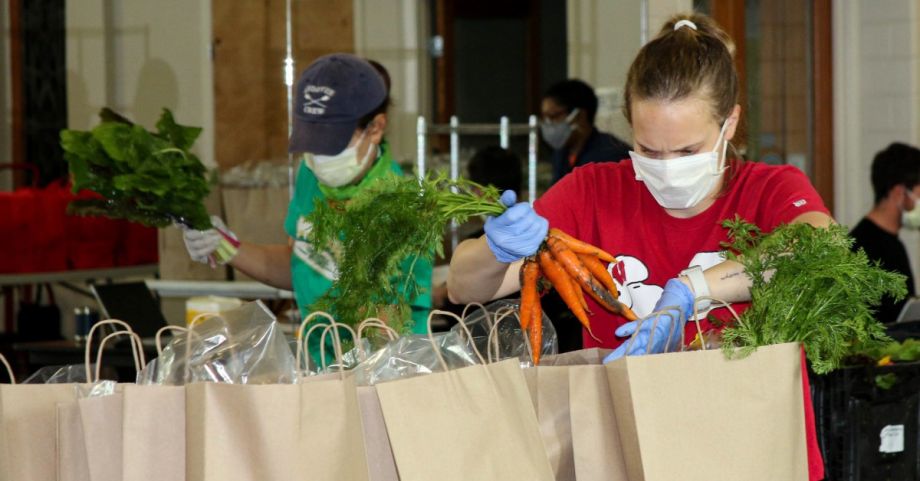 Volunteers at Good Apple pack bags of groceries to donate to people in need in Austin. Many Austinites found Good Apple through a new service, ConnectATX, that aims to be a one-stop shop for aid during COVID-19 and beyond. (Photo courtesy Good Apple)

Mary Davis had to stop riding the bus a few years ago. The 59-year-old has various health conditions and her doctor said she needed to limit travel, making it hard to get to the food pantry. Then she discovered food delivery service Good Apple last May. Ever since, they’ve been dropping off donated fresh produce and pantry staples at her apartment doorstep weekly, which helps supplement her food stamps. Davis especially loves the pinto beans. “I appreciate everyone who packs those bags,” she says. “I need it.”

Even before COVID-19, one in four households in Austin were having trouble putting nutritious food on the table — especially in low-income communities of color in East Austin, where Davis lives. Cue the pandemic, and it’s only gotten worse. In April, calls about food to the city’s resource referral helpline nearly doubled from the previous year.

To increase food access for everyone, the City of Austin designated ConnectATX as the go-to resource during COVID-19. The site offers a vetted list of school meals, food pantries, curbside meals, and food delivery services like Good Apple, as well as social service programs.

You might come to ConnectATX because you need groceries, then discover an organization that can help with rent assistance. So far, there’s 2,758 programs (and counting) listed, ranging from childcare to mental health to transportation.You won’t generally find hyperlocal grassroots efforts, although some mutual aid groups are listed.

ConnectATX developed out of a local partnership between United Way for Greater Austin (which runs the resource referral helpline) and online social services directory Aunt Bertha, with funding from the Michael & Susan Dell Foundation. Director Gyllian Garvey modeled the site from the Community Information Exchange, a database of networked health and social service providers in San Diego, as a way to “enhance, not replace” the helpline.

When someone dials the helpline number 2-1-1 they typically say what they need, write the information down, and go on their way. With ConnectATX, specialists guide callers through a questionnaire that addresses a variety of needs, then sends them resources via text or email as a follow-up. The long-term goal is to track if people actually got help — which is different from the 2-1-1 Texas directory that already exists. And if someone would rather remain anonymous or doesn’t want to wait on hold, they can simply search ConnectATX on their own.

The site had only just launched in mid-March with a couple of hundred users when Austin issued a shelter-in-place order. In the three weeks following, users grew by 425 percent, with food as one of the top searches. ConnectATX had to pivot focus. Their call specialists now help handle the overflow of 2-1-1 calls, while a data team of Aunt Bertha “Berthlings” and ConnectATX folks work together to add new food programs or update existing ones to make sure hours, eligibility requirements, and more stay current.

“In the COVID-19 emergency food space, on Monday a food pantry could be open from 9-5 and then they may lose their funding or decide to switch locations because of their staffing,” says Garvey. “We don’t want to be sending people who are in dire need to the wrong location at the wrong time, making their life even more difficult.”

As the platform is only as good as the information in it, anyone from the community can suggest programs and organizations can “claim” them to ensure accuracy. Given how stretched thin organizations are right now, however, having a team dedicated to proactively updating programs has proven to be more beneficial.

In a time when things feel uncertain, Garvey believes having the choice to seek help on your own can be empowering. Aunt Bertha founder Erine Gray agrees. “What I’m trying to get at is, how do we eliminate as much unnecessary anxiety as possible?” he says. “With self-service, there’s dignity. There’s control.”

Gray says Aunt Bertha has been preparing a decade for this kind of crisis. Aunt Bertha’s niche has always been connecting people in need, whether through its own sites or custom internal platforms for nonprofits and social service agencies across the country. Gray’s ultimate goal is to make the process as easy as possible. By having one platform that addresses a variety of needs, for example, it cuts out having to share your struggles over and over again.

With physical isolation measures in place, however, you might crave talking to another human. And while Austin is a tech city, over 50,000 Austinites don’t use the internet, according to a 2015 survey on digital inclusion.

Still, ConnectATX aims to be accessible. Text is minimal and easy-to-read. You can search in over 50 languages, a plus for a city that’s home to many immigrant communities. Of the people Good Apple has delivered donated emergency food to so far (many who say they found the service through ConnectATX), approximately half speak Spanish as a first language with Chinese, Vietnamese, and Arabic following suit.

As the pandemic has evolved, the ConnectATX team has added more COVID-19 specific resources, such as testing sites, federal and state benefits guidelines, and organizations providing financial assistance. With Texas’ recent phased reopening, they’re thinking through which needs will be next, like childcare. For Garvey, seeing how Austin has rallied around the crisis has only deepened her belief in the need for a networked response.

“Austin is very philanthropic. Everybody has very big ideas and wants to be helpful,” she says. “Having a couple of people at the center who keep up-to-date on what’s happening can really create that connection between everybody in the city.”

Celeste Hamilton Dennis is a freelance journalist based in Portland, Oregon. Her work focuses on responses to pressing social problems, exploring a range of issues from mental health to women's rights.