After Fatal Bus Rape in India, A Look at Safety on U.S. Transit Systems – Next City

After Fatal Bus Rape in India, A Look at Safety on U.S. Transit Systems 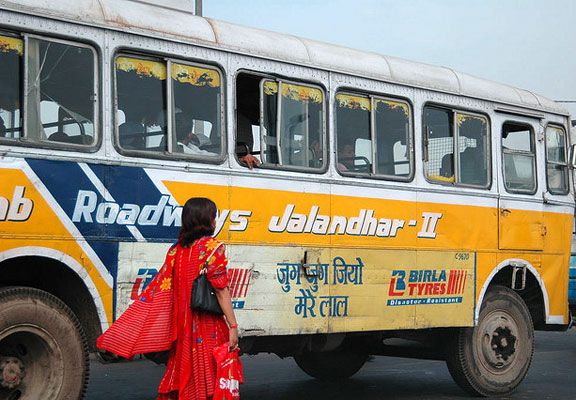 The fatal rape of an Indian woman on a bus comes as a tragic reminder that public transit systems across the world lack safeguards to prevent attacks.

For the past two weeks, the world has been watching as the entire nation of India has struggled to respond to the horrific gang rape of a 23-year-old woman aboard a bus in New Delhi. She was assaulted so brutally by the group of six men, who used a metal rod to torture her, that her intestines had to be removed and she died of her injuries after two weeks in the hospital.

Millions of ordinary Indians have condemned the December 16 rape as symptomatic of widely accepted violence against women in the nation, where the rate of reported sexual assault has mushroomed over the past generation, rising 25 percent in just the last six years. Sexual harassment and violence on public transportation are so routine that women have their own designated cars on the subway, as they do in several other nations around the globe. That hasn’t ended the problem.

Indian politicians regularly blame women for the assaults, saying that they should not go out after dark or dress in revealing clothing if they want to be safe (the victim in the New Delhi case was coming home from a nighttime showing of “The Life of Pi” with a male friend). Protesters have pushed back against this idea, carrying signs with slogans such as, “Don’t teach me what to wear, teach your sons not to rape.” India’s rape epidemic, say many observers, is indicative of just how little women are valued in the society at large.

This isn’t just an Indian problem. Another bus rape made the news briefly in the weeks before the New Delhi horror, and it happened in the United States. While it wasn’t fatal, it was terrifying and despicable all the same.

On November 7, an 18-year-old woman got onto a public bus in Los Angeles. News reports describe her as developmentally disabled, with the mental age of a 10-year-old. A man got onto the bus with her, then proceeded to rape her for 10 minutes as the driver continued along the route. According to news reports she was too frightened to cry out. Another rider tried to get the driver’s attention but apparently failed. The assault ended only when the bus reached the end of the line.

With the help of surveillance video, 20-year-old Kerry Trotter was later identified as a suspect in the crime and arrested. It was the third rape in the county bus system last year, according to the Metropolitan Transportation Authority.

The L.A. rape briefly made headlines, then disappeared into the rear-view mirror as the news cycle sped along. A spokesman for the L.A. County sheriff’s department said the victim “was in the wrong place at the wrong time,” and tried to explain how such a thing could happen in broad daylight:

Given that Trotter was standing up with his back to the driver and the victim was sitting down, other passengers may not have known a rape occurred, Sgt. Dan Scott of the Los Angeles County Sheriff’s Department said. “People generally think of a rape as some type of an attack where someone is thrown down. It is not always the case,” Scott said. It “seems reasonable that they would not know what was going on.”

To one longtime observer of public transportation in the city, the rape was symptomatic of the disregard most people in the autocentric city show to transit riders, especially women.

“While I’m shocked, because it’s an appalling thing, I can see it happening,” said Browne Molyneux, editor and publisher of the Morningside Park Chronicle, a community newspaper serving the city’s Ingleside neighborhood. “If you ride the bus, you’re not worth anything. The attitude is that people who ride the bus aren’t real people, so why should you care about them?”

Molyneux says that she used to ride the bus regularly around L.A., using it as her primary mode of transport, but that she finally broke down and got a car because she couldn’t deal with the constant harassment. “To me, buses are really unsafe if you’re a woman,” she says. “You have some men who feel the only power they have is to control women. People would just come up and touch me. It’s so draining.”

Police attitudes don’t help, she says. “I would stand outside my house waiting for a bus and the cops would drive by slowly,” says Molyneux. “I finally realized they thought I was a prostitute because I had to get a 4:30 a.m. bus to get to my teaching job.”

Examples of rape associated with public transportation are depressingly easy to find. In 2011, a woman in Nottingham, England, was told to get off a bus by the driver at 3am because she was 20 pence short of the £5 fare. She was attacked and raped as she walked along the road waiting for her mother to pick her up, the BBC reported. In Chicago last summer, a woman was abducted at gunpoint from a Chicago Transit Authority train and taken by two men to an apartment where she was raped. And in Jakarta in 2011, in a case eerily similar to the New Delhi one, a young university student was picked up by four young men in a minibus, raped and then killed.

Molyneux says that in L.A., more value needs to be put on the safety of women who ride the transit system. “They’re planning for graffiti and trash,” she says. “They should plan for people’s safety as well.”