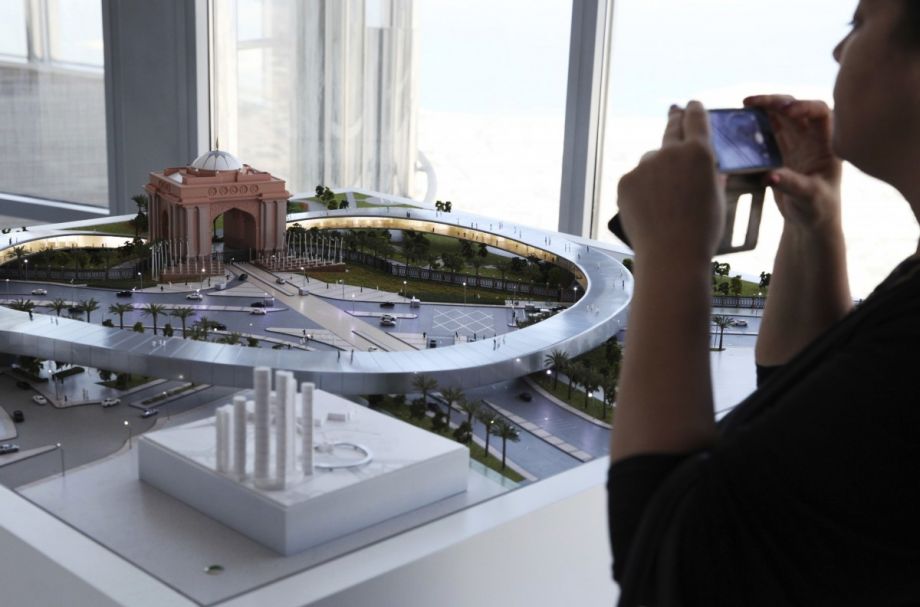 A model of the Hyperloop One project is displayed at a November 2016 news conference in Dubai, United Arab Emirates. The city-state announced a deal with Los Angeles-based Hyperloop One to study the potential for building a line linking it to the Emirati capital of Abu Dhabi. (AP Photo/Jon Gambrell)

Elon Musk’s Hyperloop concept has inched another step closer to actually whisking people between cities through low-pressure tubes at airline speed. In January, the Los Angeles-based Hyperloop One company (Musk isn’t affiliated) announced 35 semifinalists for its Global Challenge, an open call for proposals to implement the futuristic technology. Now it has whittled that number down to 10, including four routes in the U.S.: the Denver metro; from Chicago to Pittsburgh; from Miami to Orlando; and from Dallas to Houston. Hyperloop One announced the news Thursday.

Other routes in the final 10 link Glasgow to Liverpool in the U.K., Mexico City to Guadalajara in Mexico, and Mumbai to Chennai in India.

A panel of experts in infrastructure, technology and transportation chose the 10 applicants based on route, implementation strategy and stakeholder involvement from the public and private sectors, according to Hyperloop One.

Like other winners of (increasingly popular) infrastructure “challenges,” selection doesn’t automatically mean that the tubes will be built. However, Hyperloop One states that it “will commit meaningful business and engineering resources and work closely with each of the winning teams/routes to determine their commercial viability,” going forward. And the Denver route is slightly closer to reality: As a result of the challenge, Hyperloop One and the Colorado Department of Transportation, with support from engineering firm AECOM, are about to enter into a public-private partnership to begin a feasibility study.

“We are excited to partner with Hyperloop One in exploring the next step of feasibility of this innovative technology, potentially transforming how Colorado moves,” CDOT Executive Director Shailen Bhatt told Denver’s local Fox News channel. “The Hyperloop technology could directly align with our goals of improving mobility and safety in Colorado, and we have been encouraged by the continued progress the technology is taking.”

The proposed Colorado route would service 10 cities and roughly 4.8 million people, according to the station. It would move between Denver and Greely (roughly 60 miles) in six minutes and between Denver and Vail (roughly 100 miles) in nine minutes, Fox 31 reports, adding that the study will look at “economic benefits, proposed routes and potential strategies, regulatory environments and alignment with overall high-speed travel.”

With the Chicago-Pittsburgh route still in the running, the more northern Midwest is also eyeing the technology’s potential, particularly for freight. That route would run through Columbus, Ohio.

“If you make [freight] faster, think of what we can do as part of the Midwest economy … ,” Thea Walsh with the Mid-Ohio Regional Planning Commission recently told Columbus’ local NBC channel.

According to Hyperloop One, the winning routes connect 53 urban centers and roughly 150 million people worldwide. As Next City has covered, the company had a rocky 2016, when it was sued by co-founder Brogan BamBrogan. In July, however, it announced that a successful full-systems test of its tech had been conducted in the Nevada desert.