This Is What Transit Designed by Architects Looks Like – Next City

This Is What Transit Designed by Architects Looks Like 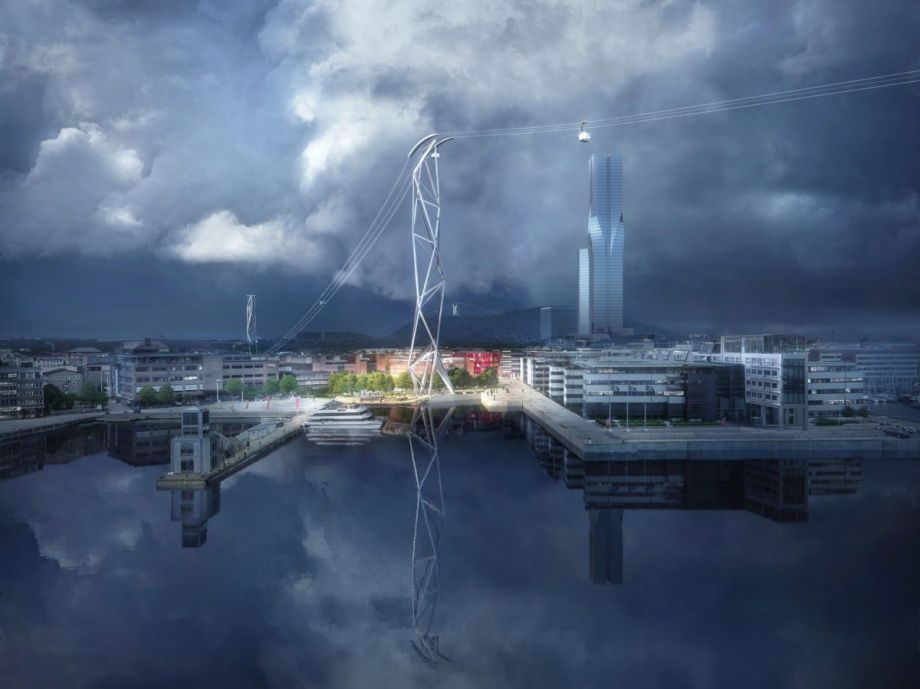 A rendering of the Gothenburg Cable Car (Credit: UNStudio)

The aerial gondola line will be suspended from six towers whose lattice-like design recalls the form of shipyard cranes, a nod to the port heritage of Sweden’s second-largest city. The architects envision a “city balcony’ with great views around the tallest of the towers.

The line will connect Järntorget on the south bank of the Göta älv river with three stations on the north bank. Each of the four stations will be designed around “principles of natural way-finding and social safety” along with sustainability. All six of the towers are designed to minimize their impact at ground level and will be surrounded by parks and pedestrian paths. Spotlights trained on the towers will turn them into lit beacons at night, and the stations will feature natural plantings that help remove pollutants from the air. Skylights in the stations will minimize the need for artificial light, and public seating and “leisure zones” around the stations will integrate them with their surrounding neighborhoods.

The cable car line is slated to enter service in time for Gothenburg’s 400th anniversary in 2021. It will be the first new form of public transport in Sweden since the first line of Stockholm’s subway opened in 1950.

Railway Age reports that NJT’s board of directors voted unanimously to select the route for a long-discussed extension of the HBLR line northward into Bergen County. This selection is the “Locally Preferred Alternative” required to complete the environmental review process required for Federal funding.

The route the NJT board approved will follow a CSX right-of-way from the line’s current terminus at Tonnelle Avenue in Jersey City to the Englewood Hospital and Medical Center. The 10-mile-long double-track extension will have seven stations — one each in North Bergen, Ridgefield, Palisades Park and Leonia and three in Englewood. Parking for more than 2,700 vehicles will be provided along the line, which NJT estimates will carry an average of 12,370 passengers per day by 2030.

Actual design and engineering work on the line won’t start until the Federal Transit Administration signs off on the environmental impact statement. There’s no estimate of when that will happen yet.

Galway, Ireland, Ordered to Let Go of its Tram Dreams and Build a Road
Dublin may have its Luas light rail, but Galway won’t join it in having one. That’s because, according to a news report in the Connacht Tribune, Ireland’s National Transport Authority has decided the money it would cost would be better spent on other means of unclogging the city’s notorious traffic.

NTA chief Anne Graham called the tram proposal “a highly inefficient solution” for the city’s traffic woes at a Joint Oireachtas Committee on Transport meeting last week. Graham cited a study that indicated a mass transit line would need to carry 1,100 riders an hour to have an effect on traffic in the city as the basis for her conclusion; the proposed tram line could carry only one-third of that total.

Committee members, who come from the Galway City and County Councils, were told that they should focus their energies on completing an outer ring road bypass of the city, work on which had been sidelined while city officials pushed for a “Gluas” tram line.

In the aftermath of the decision, city officials said they would also work to improve the current public transportation options available to Galway-area residents in an effort to cut down on the number of cars pouring into the city.