How to Evacuate a Very Tall Building – Next City

How to Evacuate a Very Tall Building 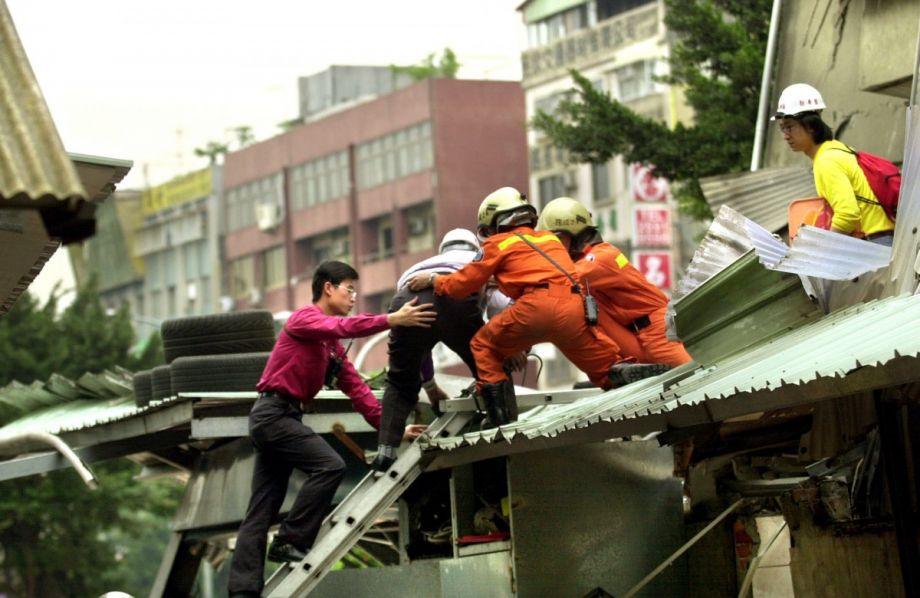 Rescuers work after a building partially collapsed and tilted during a 2002 earthquake in Taipei. (AP Photo/Wally Santana)

From devastating fires to typhoon waves that make cruise ships look small, we move daily toward a future full of superstorms and smoke. And while sea walls and disconnected grids can mitigate the effects of climate change, they won’t help during that heart-stopping moment when disaster approaches and everyone needs to leave.

Safe evacuation plans are a must as we aim for resilience, but they’re very hard to pull off. High-rises pose a particular challenge. As 9/11 tragically showed, nothing spells chaos more than thousands of people trapped high above the ground. Still, engineers, public officials and even psychologists are studying everything from exit flow to crowd mentality in an attempt to better prepare. Their findings will only become more relevant with time. And they point to one surprising strategy that, in the words of one engineer, is downright taboo: the elevator.

Of course, anyone who’s ever used an elevator can recite the emergency sign by heart: “In case of fire use stairs.”

But a variety of factors need to be reconsidered before we go with our collective gut and run from the light-up buttons and sliding doors.

First, tall buildings are not designed for rapid, mass exit. Their conveyance corridors — both stairs and elevator shafts — are narrow by necessity. According to Director of Fire Engineering Simon Lay, of engineering design firm AECOM, if you built a stairway wide enough to evacuate everyone in a high-rise at the same time, it would take up the whole building.

So often, in the case of fire, first responders contain the blaze and evacuate people in phases. But phased evacuations aren’t always possible in disasters — whether they’re caused by humans or nature. Which leads to a simple problem of engineering.

“When you need to evacuate everyone at the same time, the stairs get clogged up,” Lay says.

And stairways aren’t the only hurdle. When crowds surge to the closest exit, anything from a narrow door to a poorly placed table can bottleneck movement, slowing everyone down.

A bottleneck can come from something simple, like a door, he says. But it can also come through trickier and more nuanced patterns of human behavior, which the tool also attempts to show.

“It predicts an evacuation, not just through architecture but through different kinds of behavior — both of people and groups,” says Hermann Georg Mayer, a member of the simulator’s development team. For example, if you’re trying to evacuate a building full of families, parents won’t run toward the exits. They’ll run toward their kids.

This so-called “human factor” is perhaps the trickiest part of planning safe, successful evacuations. Many models show evacuees rushing for exits, but as the Siemens’ simulation reveals, crowd behavior is often more complex. Add to that another tendency in times of stress: People freeze.

Victims of disaster tend to deny calamity as long as possible according to Harrie Vorst, a professor of psychology at the University of Amsterdam. Vorst published a paper in 2010 applying disaster psychology to evacuation models, building on research from other academics. Before a disaster, people are often “aware of the coming impact but try to ignore or deny the facts, reducing uneasy feelings of danger, and they show apathetic behavior with respect to the real danger,” he writes.

Even during fires, evacuees don’t always run right away.

“When an alarm goes off, you’d think a person’s initial reaction would be panic,” says Kristin Bigda, a senior fire protection engineer with the National Fire Protection Association. “But they don’t necessarily react like that. They look for additional cues.”

Hurricanes, typhoons and storm surges have greater potential for inaction, because their magnitude can be difficult to predict.

“Hurricane Irene wasn’t as bad as predicted, so when Sandy came in, a number of people thought ‘it wasn’t that bad last year,’ and didn’t evacuate,” says Cathie Perkins, an emergency planner for Miami-Dade County in Florida.

All of these factors — simple geometry, hurdles, crowd behavior and disaster psychology — need to be considered for evacuations. And between the fact that tall buildings are difficult by design to empty and the fact that many evacuees tend to scatter or freeze, we may need more than the stairs as disasters worsen in coming years. We may need to take down those elevator signs.

Many buildings have long required that elevators be recalled, or sent back down, to the first floor when a fire occurs. This allows first responders to use them, and also limits the danger of smoke pouring into the shaft and smothering passengers.

But while high-profile stories of failure abound, elevators have also saved thousands of people. During the 9/11 attacks, around 3,000 people escaped via elevator from the south tower soon after the north tower’s impact. Only one elevator was functioning in the north tower during that time, and the rate of evacuation in the former was about 50 percent faster, according to a report released by the National Institute of Standards and Technology in 2004.

Evacuation time can drop from well over an hour to 20 minutes if responders run all the elevators at once, says Lay. And officials are slowly moving to sanction them; in 2012, NFPA made code changes to permit elevator use before first responders take over an evacuation — part of an ongoing reexamination of elevators in the wake of 9/11.

They’re a promising strategy, especially as human-caused natural disasters become ever more the norm. In coming years, we’ll need ways to get out quick.

Taboo or not, elevators could help.