How the Urban-Rural Divide Became a Street War in Bangkok 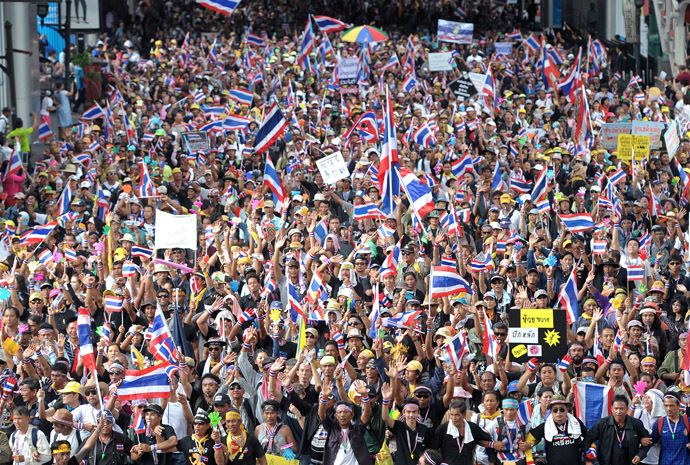 She was voted one of Bangkok’s most eligible ladies by Tatler magazine in Thailand, appears at exclusive parties all over the capital and is heir to a $2.6 billion family fortune. But the day 28-year-old Chitpas Bhirombhakdi climbed onto a tractor and led the charge toward a police roadblock in the protest-choked streets of Bangkok, the young beer heiress also became a symbol of Thailand’s so-called silver spoon revolution, and the urban-versus-rural strife that has brought the capital to a standstill.

The act of rebellion by Chitpas, whose father owns the brewery that makes Singha beer, one of Thailand’s best-known brands, was filmed and quickly circulated online in December. The reaction was telling. Within the city limits of Bangkok, she became an instant hero of a growing movement to topple the government, which has thrust Thailand into a state of emergency. Outside Bangkok, however, the country’s mostly rural working-class voters saw her actions as further proof that the protests are merely a tantrum on the part of Thailand’s urban elite.

“She’s rich, and she lives in rich people’s circles,” scoffed Patsadaporn Chantabutr, a 45-year-old teacher living in one of the rural provinces in the north of Thailand.

Such is the upside-down world of Thailand’s increasingly fraught political divide. From the Soviet Union to the Arab Spring, we’ve come to expect revolutions led by disgruntled and downtrodden workers, disenfranchised citizens fighting for an end to the monopoly on power by the rich and influential. But what’s happening in Thailand right now is just the opposite — the country’s wealthier urban class are the ones who have taken to the streets, demanding a disruption to the status quo. Known as yellow shirts, they are well-educated middle-class housewives, lawyers and bankers, TV personalities and comedians, and the vast majority of them come from the capital city of Bangkok. They wear designer sunglasses to rallies and carry wads of cash in expensive handbags to give to protest leader Suthep Thaugsuban, who himself possesses a large personal fortune.

The protesters, who’s movement is called the People’s Democratic Reform Committee, are several months into an attempt to force Prime Minister Yingluck Shinawatra to resign. Their rebellion started when the government attempted to pass an amnesty law that was widely seen as an attempt to allow Yingluck’s brother, the former Prime Minister and billionaire businessman Thaksin Shinawatra, to come out of self-imposed exile without facing corruption charges. For the past three months Suthep and his followers have besieged Bangkok with daily protests and rallies in an attempt to shut down the city and delay a snap election called by Yingluck for February 2.

Their ultimate goal, says Suthep, is to replace the government with an unelected people’s council in order to suspend democracy until electoral reforms are introduced which will tackle corruption and end the Shinawatra family’s monopoly on Thai politics for good.

Their enemy are the majority of Thais who live in the rural north and northeast, a group almost always characterized as uneducated and easily manipulated. They are the “red shirts,” and are said to be die-hard supporters of Yingluck and Thaksin, who they credit with introducing a raft of populist policies that have helped lift previously neglected rural communities out of poverty.

That the protests would take place in Bangkok was a foregone conclusion. It’s the only big city in Thailand, and a vastly disproportionate level of the country’s wealth and power is concentrated here. The economic miracle that has made Thailand one of the power-players of Southeast Asia is far less apparent in rural provinces, where people still live off the land as they have for decades. “In many ways, Bangkok still rules the provinces as on overlord of colonies, rather than as the capital of a democratic country,” wrote political commentator Voranai Vanijaka last week in the Bangkok Post.

This imbalance has only fanned the flames of the conflict, as voters from the north see an aloof urban class trying to shut rural Thailand out of the democratic process. “Eighty percent of Thais want to exercise their right to vote,” says Mahawon Kawang, a red shirt from Yingluck’s hometown of Chiangmai. “[The protesters] look down on the people from the north, but democracy is for everyone. They can’t pick and choose.”

Kawang, for his part, hosts a radio talk show and holds a master’s degree. He’s not the kind of country bumpkin that Bangkok’s protesters imply is too easily manipulated to be allowed to vote, the type that Singha heiress Chitpas was referring to when she said that Thais outside Bangkok, “especially in rural areas,” lack a “true understanding” of democracy.

(Chitpas’s comments weren’t without consequence: sales of Singha plummeted around the country, and red shirts posted pictures online of themselves pouring the beer on their feet – a scathing insult in Thailand.)

While the urban-rural divide does basically delineate the conflict, it’s also true that some rural communities are turning against the government. In Pichit, a fertile belt of rice paddies in Thailand’s central plains, farmers have for weeks been blockading roads and holding protests against the very government they used to support. The promise of big subsidies for farmers helped sweep Yingluck to power in 2011, but those subsidies haven’t materialized, and in Pichit, as many as 40,000 farmers have not been paid for harvests they sold to the government in October, forcing many families to take out high-interest loans to pay for fuel and fertilizer for the next season’s planting.

And so, last week hundreds of farmers said they were ready to join the protests in Bangkok, crossing Thailand’s intractable color divide. The announcement was a huge boon to Suthep and his supporters, who seized on the opportunity to mock the government for turning its back on its core electorate, the rural poor.

In any normal political arena, this would strengthen the argument for a fair and speedy election, offering the underdog an easy way to win support from the disgruntled masses. Not in Thailand, however, where protesters still say they would prefer to “suspend” democracy and sabotage elections rather than risk losing again at the ballot box. The Democrats have not won an election since 1992.

“We want to make sure the farmers get paid, but it won’t help us win,” said a spokesman for the democrats in Pichit. “Rural people are naïve. They will always vote for who offers them more money, and we don’t want to do the same as Thaksin.”

This is where, says political commentator Vanijaka, the us-versus-them mentality, encouraged by the constant typecasting of who supports who in Thailand, hurts the country most.

“We are a web of tribal networks based on hierarchy, relationships, loyalty, nepotism and benefits,” he writes, adding that both sides need to move away from overly simplistic narratives of red versus yellow. “As soon as we realize it doesn’t help to be divided and that democracy is about compromise, the sooner Thailand will be unified again.”