How the Oregon Convention Center Put Equity First – Next City 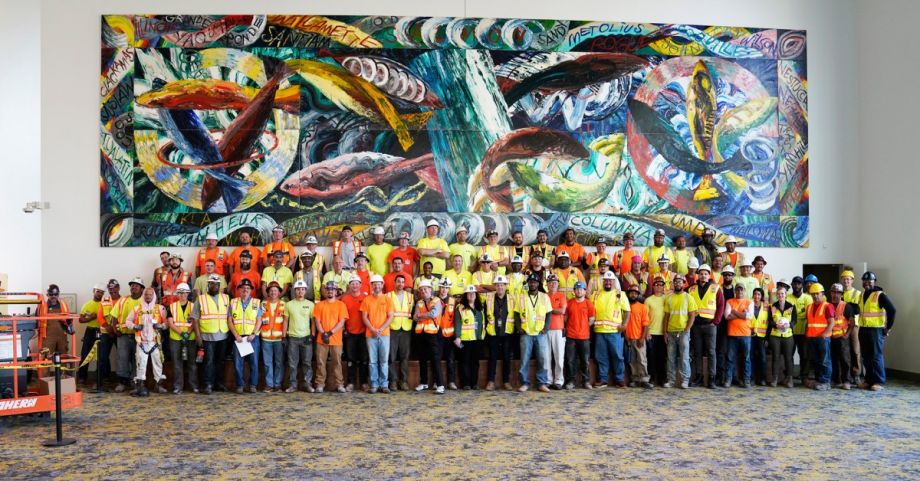 Andrew Colas, president of Portland-based Colas Construction, has a vivid memory interviewing for the role of general contractor to renovate the Oregon Convention Center. “We were being asked standard questions about how we would get this work done,” he recalls. “At a certain point, one of the project managers asked if we’d have the bonding capacity for the project.”

Colas Construction had capacity to bond construction projects up to $150 million. But as a Black-owned firm, Colas was accustomed to project managers expressing doubt his firm could take on large-scale, high-budget projects like the convention center.

“When we were asked that question, someone on the selection committee said: ‘Don’t answer that question, it wasn’t asked of any of the other participants,’” he says. “I think the reason that person was stopped is because they wanted to make it fair.”

It signaled to Colas this would be a unique project, one his firm was ultimately selected to lead as prime contractor. The $39 million renovation, awarded in 2017, was the state’s largest public works contract awarded to a Black, Indigenous or minority-owned contractor.

Metro, the regional government authority of the Portland metropolitan area, applied an equity lens framework to every stage of the renovation of the convention center. That renovation, which wrapped this year, resulted in a 48-page equity report detailing its success, with the hopes the report can serve as a model for equity in public improvement projects across the country.

“The idea is to stop hearing excuses we constantly hear — that there’s not capacity [within Black- and Indigenous-led firms], there aren’t the people who can do it,” Colas says. “This shows that a Black contractor landed the largest contract any BIPOC contracting firm has landed in the state of Oregon and accomplished their goals.”

Selecting the Oregon Convention Center for an equity-focused renovation was not random. Like many public projects built across the country in the era of urban renewal, construction of the original convention center in the late 1980s displaced residents and businesses of the Albina District, once the center of Portland’s Black community. According to the report, if those residents had been able to stay, as many as 5,541 homes in the district would be Black-owned. That would represent $3 billion in current real estate value.

Black Portlanders were also shut out from job opportunities both in construction of the convention center and after its 1990 opening. Economic disparity remains an issue across the state — a 2020 report noted that African Americans are collectively earning 73 cents for every dollar the median Oregon household earns.

Ray Leary, a member of the Metro Exposition and Recreation Commission, which oversees the convention center, felt Metro had a responsibility to address not only the convention center’s past, but the lack of diversity in more current hiring for public works projects. “Awareness was slow in coming, but once it was made clear, there was a concerted effort by Metro to begin to frame an agenda from a racial equity lens,” he says.

“The one place we felt had the greatest opportunity for change was in the multi-million-dollar construction projects associated with Metro,” Leary continues. “Few of those projects had records we could be proud of in terms of serving people of color and African-Americans in particular.”

For large construction or renovation projects, public agencies often work with the same major contracting firms. Procurement processes often result in repeat contracting with these firms, as opposed to encouraging smaller, more diverse firms to participate in the bidding process. Too often, Colas notes, efforts to bring minority-owned firms onto such projects assume they are only to be hired as subcontractors, when instead agencies should focus procurement on recruiting minority-led prime contractors to lead large scale projects.

Metro knew that to ensure an equitable renovation for the convention center, it had to completely rethink its procurement process, from releasing the “Request for Proposals” to final interviewing. The agency teamed up with the National Association of Minority Contractors of Oregon to identify the barriers that existed and completely redesign procurement.

“Typically, you’d ask that you want to see 10 years of experience in public improvement projects,” explains Metro procurement manager Gabriele Schuster. “Well, of course that eliminates a lot of companies. So we just asked to see projects within the last five years, whether they were public or private.”

Another barrier they identified: Sustainability metrics set by Metro that could be a barrier for smaller firms to succeed in the process. “A very large company might be able to afford electric trucks or solar panels,” Schuster says. Metro decided to think of sustainability from a different perspective and asked questions accordingly. “We asked about what is already in place, how the firm is contributing back to the community, how their work environment is flexible to accommodate things like families,” according to Schuster.

From there, Metro and the trade association established a diverse evaluation panel and redesigned the interviewing process to include questions more inclusive of smaller, diverse companies. What distinguished the process to Colas was Metro’s clear priority “to create a fair and intentional process that did not exclude BIPOC prime contractors, but instead encourage them to compete,” he says. “It’s always minority firms hired as second- or third-tier contractors — and those programs weren’t created to promote or propel the existence of minority contractors.”

Once selected, Colas Construction set ambitious goals: for 30 percent of subcontract dollars to be awarded to businesses registered with Oregon’s Certification Office for Business Inclusion and Diversity; to establish a robust apprenticeship program; to maximize employment opportunities for workers of diverse racial-ethnic backgrounds and for women; to engage the local community through the bidding process.

Prioritizing equity from the get-go had profound effects throughout the project. “We were sharing ideas and coming up with creative ways on how to be more productive and find better solutions,” says Colas. “It started being about everybody working together … we were all on the same team with a common goal.”

Leary, of the Metro Exposition and Recreation Commission, adds that setting the tone for equity “created a free-flow of information, a basis for trust, for non-judgmental reactions and non-partisan dialogue. We recognized there was only one boat, and we were all in it.”

The report does far more than list statistics. It details the displacement caused by the convention center, the larger systemic oppressions faced by Black Portlanders and the impacts of inequitable practices in the construction sector. It outlines the strategies Metro and the National Association of Minority Contractors-Oregon employed to apply an equity lens and offers recommendations for centering equity in future public projects. The equity analysis lays out the value of the construction contracts, the contractors those contracts were awarded to, the workforce hired and how much they were paid.

To Colas, the fact that the process focused on hiring a Black- or Indigenous-owned prime contractor is laudable. “The system was created for firms like mine not to exist,” Colas says. Colas believes industries across the board need to look at elevating minority-owned companies into top leadership positions, as opposed to merely including them in the process.

“If we start shifting our mindset to believing that Black, Indigenous and people of color can be in the prime position, everybody will start to raise their levels,” he adds. “There will be more firms like mine that exist.”