Housing in Brief: How the New York Metro Can Make ‘Hundreds of Thousands of New Homes’ – Next City

Housing in Brief: How the New York Metro Can Make ‘Hundreds of Thousands of New Homes’ 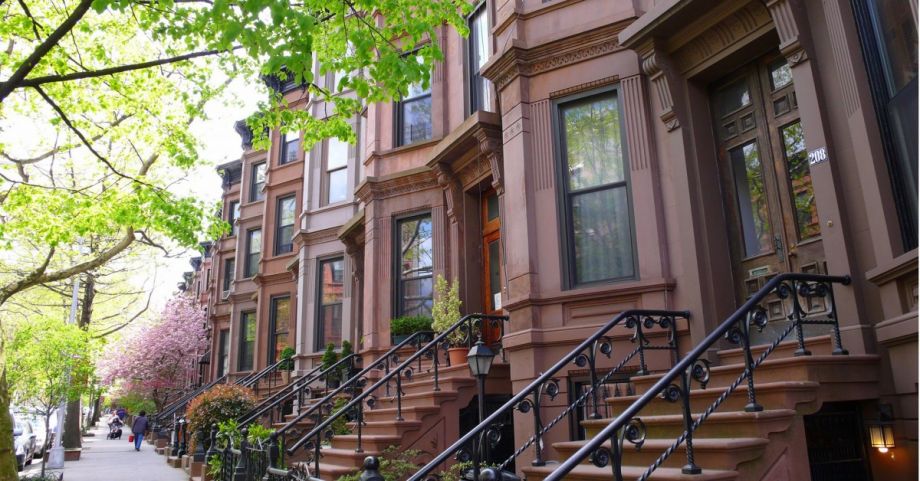 In any residential area in the region, it's legal to convert a single-family home into a two-family home, but the reverse is rarely true. (Photo by Matthew Rutledge / CC BY 2.0)

In every part of the New York metropolitan area, two-family homes can be converted into pricier single-family homes, but the opposite process — turning a single-family home into two smaller units — is only allowed in a handful of places, says a new report from the Regional Plan Association. Changing laws and land use policies in New York, New Jersey and Connecticut could help add “hundreds of thousands of new homes” to the region without any additional construction, the report says. The report, called “Be My Neighbor — Untapped Housing Solutions: ADUs and Conversions,” follows on previous research by the RPA into the New York region’s various housing crises. It suggests that promoting accessory dwelling units could substantially expand the housing stock in areas with good access to public transit even without expensive new construction.

“Simply building our way out of this housing shortage will be challenging,” the report says. “Major new affordable multi-family buildings are part of the solution, but ultimately we cannot meet our housing growth needs solely through large new developments. Fortunately, we don’t have to. Done thoughtfully, every municipality can create more housing simply by allowing more flexibility within the context of existing land use patterns.”

The report focuses on accessory dwelling units — standalone units added to or repurposed from existing homes — and conversions of large single-family homes to two- or three-family buildings. Those strategies are “innovative, low-impact solutions that work within a neighborhood’s scale to expand housing options to seniors, young adults, and workers,” the report says. The report recommends promoting their proliferation through state law changes, local zoning and land-use policy. It also recommends minimizing off-street parking requirements, and providing technical and financial assistance for ADU construction. Promoting more housing in those ways could also help mitigate segregation in predominantly white communities where large lot-size requirements prevent many new residents from moving in, the report says.

“By implementing policies and programs that promote ADUs and conversions as soon as possible, we will be in a better position to address many of the physical and institutional barriers we have created and ensure everyone has the opportunity to live a full and healthy life,” the report says.

Amid fears about rising COVID-19 cases in Hawaii public-housing complexes, authorities are planning to impose new rules for masking and social distancing — and to evict residents who don’t comply, according to a report in Hawaii News Now. There are at least 30 cases of COVID-19 in properties owned by the Hawaii Public Housing Authority, with half of them in one complex, according to the report. But officials expect that the actual spread of cases in public housing is much greater, the report says. Residents are now required to wear masks and stay six feet apart in common areas, according to the report. If they get cited for violating those rules twice, they can be evicted, according to the report.

“In public housing, it’s like being on an airplane,” a member of the housing board said in a meeting about the new rules, according to the report. “We have a consolidated group of people in a confined space, and as leaders we need to take extreme cautions just like airlines.”

Some advocates say that the new public-housing rule is counterproductive. “This move is disappointing and does little to make the public housing community safer by threatening to evict people to the streets,” said Deja Ostrowski, an attorney from the Medical-Legal Partnership for Children of Hawaii, according to Honolulu Civil Beat.

The San Francisco Board of Supervisors passed a law in June that implemented a permanent ban on evicting tenants for rent payments they miss because of the pandemic, as Next City noted at the time. Soon after, landlords sued the city, saying the law was an unconstitutional taking of their property. But a judge ruled this week that the law “is a ‘permissible exercise’ of the city’s power,” according to a report from the Courthouse News Service. The property owners that filed the suit say they’re trying to protect their rights.

“My clients are fighting for the very principle that when a landlord rents a property, the tenant has to pay rent or the tenant has to move,” Andrew Zacks, an attorney for the landlords, told Courthouse News Service. “That’s the hallmark of what a landlord-tenant relationship is. San Francisco is trying to upend that … Most landlords don’t want to evict and would much rather work something out with tenants, but tenants don’t have an incentive to work anything out.”

Many landlord lawsuits lean on the notion of constitutional “takings,” the idea that a policy deprives property owners of so much value that it violates their basic right to ownership. Landlords sued on those grounds after New York expanded its rent control laws last year, as Next City reported. Eviction moratoriums have sparked property-owner lawsuits in other states as well, including Arizona, Connecticut, Illinois and Kentucky, according to The Real Deal. And Francisco’s more permanent policy does not free tenants from having to pay rent back, as the Courthouse News Service noted. But it “takes eviction off the table,” as Supervisor Dean Preston, who sponsored the law, put it, according to the report. Superior Court Judge Charles F. Haines found that it was not an overreach, though the property owners plan to appeal, the report says.

“The ordinance does not compel any uncompensated physical occupation of property or otherwise give rise to a facial taking of property, and as a reasonable exercise of the police power to promote public welfare it does not facially violate the Contracts Clauses of the federal or California constitutions,” Haines wrote in his ruling.