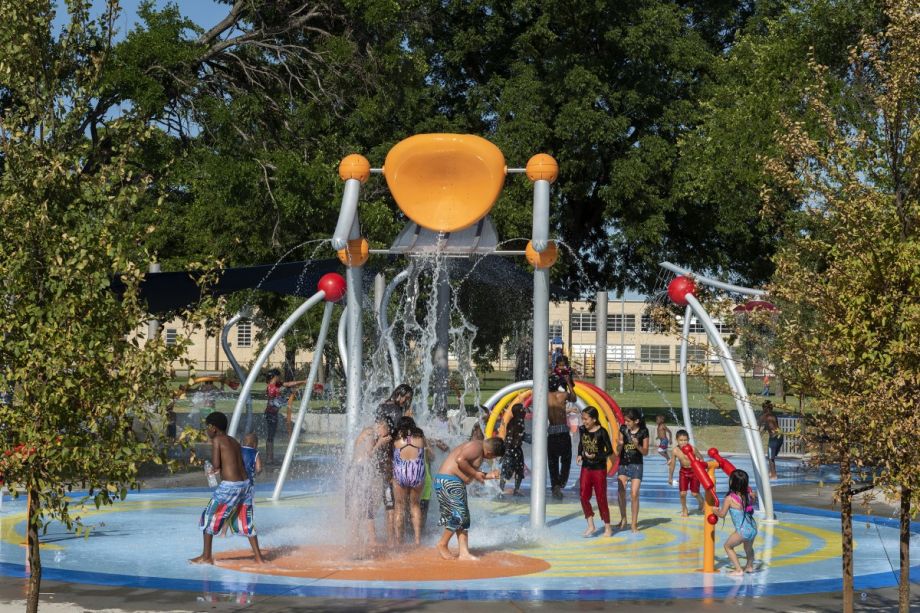 A new Dallas sprayground in action (Photo by Jeffrey Buehner)

Everything is bigger in Texas, or so the saying goes. The city of Dallas’ park system is no exception. With more than 400 parks, including well over 20,000 acres of parkland, the city boasts one of the largest municipal park systems in the nation.

Yet, what is impressive about the park system has little to do with its sheer size and more to do with how it is managed on an ongoing basis.

“The city of Dallas embraces a visionary approach to updating and adding new park features throughout the city,” says Philip Neeley of Dunaway, a Fort Worth-based professional services company that has been delivering exemplary results to its clients for more than 60 years. “This includes a balanced investment across various districts in close coordination with city council and park board members representing those citizens. The Park and Recreation Department has creatively partnered with other organizations to bring about trendy downtown parks, sports complexes, extensive trail connections, signature parks and high-energy aquatic facilities.”

The city continued its commitment to dynamic aquatic recreation in 2018 when it planned the construction of six spraygrounds to activate mature parks during the sweltering summer months. The six new spraygrounds contain water features that douse, spray, mist and entertain visitors. Each sprayground has a designated area for toddlers, tweens and teenagers, as well as the parents sitting in the shade and enjoying the fun from a distance. Spraygrounds have been widespread not just in Dallas — in the last decade, the grounds have increased in popularity throughout Texas. Dunaway has enjoyed creating a variety of such waterplay environments.

As the summer winds down, all parties concerned can celebrate the accomplishment of building these six spraygrounds in less than a year. But the feat wasn’t without challenges.

The first hurdle was undoubtedly timing. The city notified Dunaway that the project was a go in late June 2018, with one key requirement: All six projects needed to be completed by summer 2019. The city and Dunaway were able to complete the project because they took several proactive steps at the outset, like scheduling team meetings every two weeks with all city departments around the table.

“The Park and Recreation Department fast-tracked the design and construction by establishing a collaborative team at the beginning,” Park and Recreation Project Manager David Mills says. “It was determined early on to partner with a sprayground contractor through the Texas BuyBoard cooperative agreement. This saved major design and procurement time. The contractor provided a construction price at the end of the design development phase, which was approved by the Park and Recreation board and city council. Coordination meetings were held biweekly with Sustainable Development to identify any permitting issues in order to save time once permits were submitted.”

This was all the more impressive considering the expansive scope of the projects. For example, in an effort to be creative and give each neighborhood a sprayground that was representative of the park, the city desired that each sprayground have its own unique design.

The city requested the size of each sprayground be the same for each park, which accomplished three things. First, it brought fairness into the equation since each park received the same size sprayground. Second, the decision saved the city thousands of dollars, since the economy of scale allowed for a more budget-friendly solution when purchasing the same pump and filtration system for six different parks. Third, the maintenance and any needed replacement equipment purchases will be greatly simplified over the life of the spraygrounds.

Yes, spraygrounds are here to stay. The popularity of the sprayground concept will only grow, given the enormous benefits that municipalities can experience in meeting the recreational needs of their cities, while doing so in a much more cost-effective manner than building and maintaining a municipal pool.

“They are very cost-effective when compared to a pool,” says Nicholas Schlereth, assistant professor of recreation and sport management at Coastal Carolina University, who has studied their use. “You don’t have the same ongoing maintenance or staffing costs. You also don’t have the level of liabilities that you would have with a pool because, for example, you don’t have standing water.”

The good news for these municipalities is they now have a blueprint for a large, successful implementation: one that cost-effectively delivers on the promise of “fairness” and “fun.” Dallas is a great example of this.

“The spraygrounds are free to use, making them accessible to anyone, no matter their income,” says Mills. “They provide a fun, summertime activity for children that allows them to stay cool while still being outdoors.”

With this successful initiative, the city of Dallas has furthered its reputation of proactively embracing recreational opportunities for all of its citizens.

Philip Neeley, ASLA, is a senior project manager at Dunaway and is widely recognized for leading multidisciplinary teams on large, complex parks and recreation projects that involve engaging community leaders and stakeholder groups in the overall vision for the project. With over 30 years of experience, Philip excels at guiding collaborative teams on the design of signature parks, community parks, sports complexes, trail corridors, neighborhood parks and unique nature-based parks. Philip oversaw the design of the Dallas Spraygrounds project, led by project manager, Adam Brewster, ASLA, of Dunaway.