How Should Minneapolis’s George Floyd Plywood Murals Be Preserved? – Next City

How Should Minneapolis’s George Floyd Plywood Murals Be Preserved? 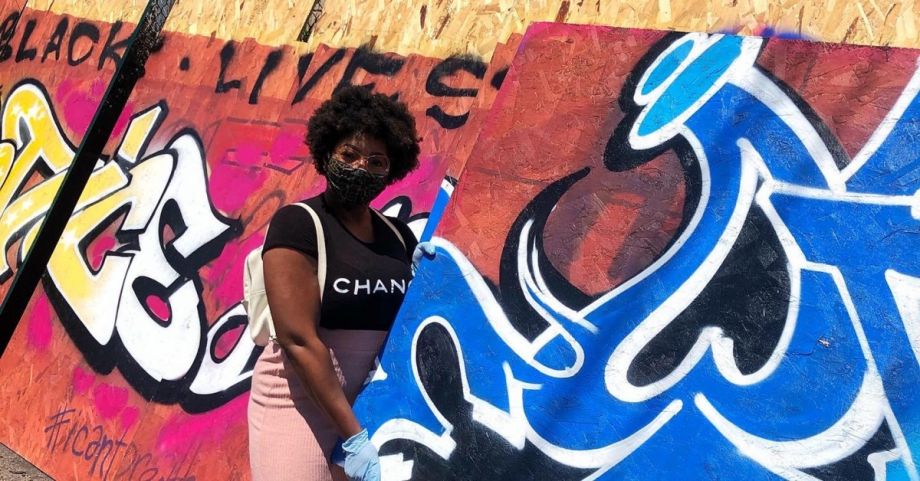 The now infamous blue and yellow mural of George Floyd at the Minneapolis intersection where he spent his final moments with a knee on his neck — painted by white and Latinx artists without engaging the Black community — aptly illustrates how white artists, through both their actions and the actions of arts organizations, centered themselves in the process of responding to an injustice that shook the nation.

While imagery has centered on that one mural, it’s merely one of hundreds by artists—some commissioned, some not, and many from the Black community—who poured out their grief onto murals painted on plywood boards across the Twin Cities. Now, some worry that those murals, painted spontaneously on cheap, disposable materials, will disappear.

Memorialize the Movement, led by Leesa Kelly, launched a GoFundMe on June 6 to ensure that “one of the largest civil rights movements of our time” is “memorialized through a Black-owned and oriented organization.” Kelly is hoping that the Minnesota African American Heritage Museum, the only Black-owned museum and gallery in the state, can keep the movement alive by preserving the art that came from it if only it can be collected.

“As a Black woman, I felt like I needed to be out there, be a body in the streets protesting and letting my voice be heard, but it was physically and emotionally exhausting. It put me in a bad place, I could barely get out of bed,” Kelly says. “I was thinking about ways that I could refocus my energy. I wanted to be out there making an impact and furthering the cause and keeping the movement alive.”

It was then that she decided to dedicate her efforts toward working with local businesses to collect the murals on their storefronts and to work with MAAHM to preserve them. (The GoFundMe’s approximately $5,000 raised is also going to the museum, Kelly says.)

Since then Kelly has been using her Jeep and recruiting people to help collect art. “I started going around to businesses and explaining to them that we have to protect this art from both colonialism and being sold and auctioned and turned [over] to white hands in a way that’s digestible to other white people,” Kelly says. So far, most of the businesses have been willing to give, she says. A handful said they would rather auction the pieces off for profit than donate them to her cause. “You’d think people would be way more receptive to the idea that this story needs to be told first and foremost by a Black owned and operated museum, but I’m trying to kill them with kindness. I’m keeping relationships and connections open and remaining them [of] our mission and purpose,” she says.

Overall, the response from business owners has been largely positive and cooperative. Right now, the eight full murals consisting of 40 boards that she’s collected already are hanging out in her garage as she and Tina Burnside, Minnesota African American Heritage Museum’s curator and development team lead, to figure out what’s possible and feasible for the future of the murals. Kelly estimates that there are hundreds of murals still scattered across the Cities.

“I want to emphasize that… we don’t want to own these pieces,” she says, adding that while MAAHM is the ideal shepherd for the project, it might not be the best physical space. “The museum is on the fourth floor of an office space, like two or three rooms. They don’t have a lot of money and everyone is a volunteer,” she says. Burnside says the museum’s desire is to ultimately find a place to display them that’s accessible for everyone and in a way that leaves ownership with the Black community.

Burnside and Kelly are considering the possibilities of an outdoor space, but their main approach is working with local businesses and community members and leaders to make the appropriate determinations. Because MAAHM is small and relatively obscurely located, the duo are considering more accessible locations like the outdoors for the murals, many of which are large-scale. That would naturally require a detailed preservation process that they’re exploring now.

As far as the role of the city goes, Mary Altman, the City of Minneapolis’ Public Art Administrator, says that she’s open to the city helping these efforts if they can, but right now she says that “the best thing we can do is stay out of the way.” In terms of what the city can offer, “the city doesn’t have a lot of public space in neighborhoods. Having these pieces in places where people have access to them in the community is probably best,” she says. She adds that “if there’s a way for us to add value, I think the city would be open to it, but this might be something that the community is better at than the government.”

While Kelly and company continue collecting physical murals, two professors at the University of St. Thomas are creating a larger digital archive of murals and more.

From commissioned works of art to stickers slapped on light poles around the world, Todd Lawrence and Heather Shirey are collecting digital versions of anything public art related that has sprung up as part of the recent wave of the Black Lives Matter movement in their George Floyd and Anti-Racist Street Art archive.

“The thinking was this would be very important for the purposes of our own research and other people’s research. Of course, this is open to everyone who wants to take a look,” Lawrence says. While he and Shirey are still battling a backlog of submissions, they encourage anyone who has an image to share to upload it to the database “so that as much of the full story can be told about what happened here and how people felt and expressed themselves as opposed to whitewashing it,” Lawrence adds.

As for Kelly, a few weeks back Memorialize the Movement got its first donation totaling a couple hundred dollars which she’s using to soon move the work she’s collected from her garage to a climate-controlled storage space. She has also teamed up with Kenda Zellner-Smith of Save The Boards Mpls, a similar effort, to join forces in their pursuits.

This article is part of “For Whom, By Whom,” a series of articles about how creative placemaking can expand opportunities for low-income people living in disinvested communities. This series is generously underwritten by the Kresge Foundation. Note: We’ve corrected the spelling of Heather Shirey’s last name.

Tags: arts and culture, minneapolis, for whom by whom