How San Francisco Became a Cycling City Against the Odds 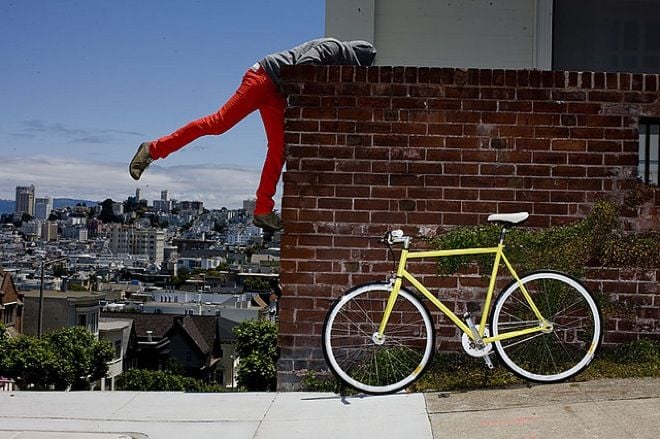 Amsterdam and San Francisco, despite being thousands of miles apart, have got a few things in common. The development of both cities has been heavily influenced by the dominance of water, Amsterdam with its northern harbour and canals, and San Francisco with the funneling effect of being a peninsula. However, San Francisco’s urban topography shares little else with the relentlessly flat Amsterdam, seeing extreme height variations that one could easily assume make the city better suited for streetcars than cycling, along with a predominantly grid-based street plan typical of North American cities.

The success of the bicycle in Amsterdam is often attributed to its flat terrain. By this logic, cycling would be unpopular in San Francisco. Yet the truth is the opposite of this. In the USA, bicycle use is (rather strangely, to this Brit at least) measured nationally by the percentage of trips taken to work by bike, reaching 0.6% in 2009. However, in San Francisco this figure was 3.2%, with local studies for all trips (yes, even those rare occasions when you aren’t going to work!) raising it to around 6%. A small figure compared to Amsterdam, but still notably higher than both the American national average and London’s dismal 2%.

Much of the city’s success with cycling has happened in the last five years, with a 58% increase in levels of cycling witnessed between 2006 and 2010. However, what is most impressive about this growth is that between these dates the city was legally incapable of developing its bicycle network.

San Francisco has, by North American standards, a long history of supporting multi-modalism. Enacted in 1973, the city’s Transit First policy was introduced to encourage ‘the use of transit and other alternatives to the single-occupant vehicle’. Whilst early versions neglected to explicitly mention bicycle use, the Transit First policy set the tone for the city’s approach to transport modes. Later updates specifically endorsed the bicycle, and the city published its first bicycle plan in 1997. This resulted in the development of San Francisco’s early bicycle network, but by 2005 the city was ready for something more comprehensive. Plans were drawn up and released as part of the Bicycle Plan Policy Framework (BPPF), aiming to create more dedicated bike lanes and places to securely stow bikes. Presenting near-term and long-term plans to improve the city’s bicycle network, its goals were, by Dutch standards at least, relatively modest. Despite this, the proposed implementation received some criticism. Although part of a large policy framework, sections of the BPPF were treated as ‘individual projects’, thus bypassing mandatory environmental-reviews. This was not well-received by all, eventually ending up in court where it was compared to ‘trying to avoid a review of a timber harvest plan by removing trees one at a time’. San Francisco found itself in the unusual position of having to prove that developments to its bicycle network were environmentally beneficial. Keen to avoid further lawsuits, the city of San Francisco undertook an extensive environmental review during which time it was legally unable to develop its bicycle network.

Yet as San Francisco’s bicycle network remained static, levels of cycling did the opposite. Program Director of the San Francisco Bicycle Coalition, Andy Thornley, attributes this to the attitude of San Francisco’s citizens:

Well, for sure, there’s no place else like SF, with the combination of mild climate and urban density and smart, self-defining culture, the traditions of environmentalism, social justice, participatory politics, street theater and un-self-consciousness – we’re not people who get hung up on what we’re supposed to be doing or thinking, or how we look when we’re doing our thing, so the “childishness” and “down-class” stigmas of riding a bike don’t discourage us so much.

Cycling activism also has a history in San Francisco. Critical Mass – an event which sees large groups cycle a designated route through a city – started in San Francisco in 1992, before spreading all over the globe. Could it be that the people of San Francisco just want to cycle, regardless of the bicycle network they have to cycle on?

Despite topographical and infrastructural differences, Amsterdam and San Francisco have more in common than a water-influenced urban form. Amsterdam’s cycling resurgence, whilst dependent on numerous external factors, was initiated by the Dutch people. Similarly, the impressive increase in cycling seen in San Francisco, whilst again dependent on external factors (of the non-infrastructural variety), could not have happened without citizen demand.

This enthusiasm for cycling might also stretch as far as San Francisco’s retailers. Surveying stores on Valencia Street – a comparatively flat part of the city which has had bicycle lanes along both sides of the road since 1999 – Emily Drennen found that 44.4% of retailers felt the area had been economically revitalised since the introduction of lanes, 37% felt they had experienced an increase in sales, and 55.6% of retailers felt an increase in area residents shopping locally. In all cases, not a single retailer reported negative effects. Of course, one street in a large city does not make a conclusive study, though it does provide an interesting snapshot into local views on the economic effect of San Francisco’s bicycle network.

What is conclusive, at least in a legal sense, is environmental impact. On August the 6th 2010, the city was finally given the all clear to recommence infrastructural developments after passing the environmental review process. This puts San Francisco in a strange – and likely unique – position of having legal support for the environmental sensitivity of its urban bicycle network.

Less legally-conclusive is Donald Appleyard’s study on the environmental and social impacts of traffic in San Francisco. Studying noise pollution and air quality – two factors directly related to the development of a bicycle network – Appleyard explored how differing levels of automobile traffic affected the development of sustainable communities. Looking at three different streets in the city, identical ‘in every dimension except the amount of traffic’, Appleyard monitored the movements of those living on the studied streets, observing interactions with their neighbours. By tracking movements, Appleyard found that people on the light traffic street knew more people, and had more friends. Of course, talking about ‘knowing more people’ and ‘having more friends’ means we’re in highly intangible territory here, though exploring the notion of ‘community’ is a largely unquantifiable endeavour, whichever way you go about it.

Despite obvious successes, it’s not all good news from San Francisco. The city’s network of bicycle lanes is not comprehensive, and plans for future expansion don’t do enough to address this. A proposed cycle hire scheme, set to launch in 2012, will serve only the city’s core. Yet criticising these imperfections is both pedantic and missing the point (and the city probably has one of the best excuses going for a lack of action in recent years). San Francisco’s physical bicycle network may not inspire envy, but the attitudes of its politicians and its people does, accomplishing far more than most cities, without any kind of infrastructural assistance.

Editor’s note: This story originally appeared on This Big City on November 24, 2011