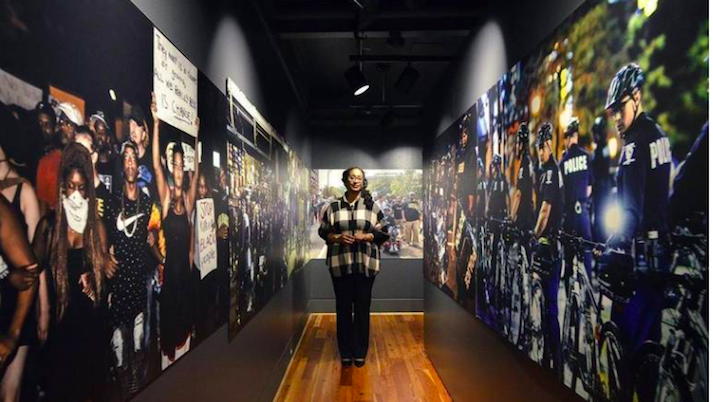 Brenda Tindal in the “K(NO)W Justice, K(NO)W Peace” exhibit at the Levine Museum of the New South in Charlotte, North Carolina. The exhibit took just three months to put together, about 25 percent of the normal timeline. (Photo courtesy Brenda Tindal)

In July and August 2018, visitors to the National Civil Rights Museum in Memphis, Tennessee were witness to a revolutionary type of exhibition, albeit perhaps unknowingly.

The exhibition in question was titled “I AM A CHILD” and featured photos of children taken at a protest on the steps of the Immigration and Customs Enforcement Agency in New York, New York. The children range in ages three to 10, and are holding signs that read “I Am a Child.”

The subject of that protest was the ongoing human rights crisis of family separation at the U.S. border, and the photos were inspired by Ernest Withers’ iconic I AM A MAN photographs.

“I AM A CHILD” was a powerful call for justice at the border — but it’s what happened behind the scenes that made the exhibition so unique.

Museum exhibits typically take anywhere from three to five years to put together, says Noelle Trent, the civil rights museum’s director of interpretation, collections and education, and one of the chief organizers of this social justice-themed exhibit.

“I AM A CHILD,” however, was a new type of exhibit — what’s being called rapid-response exhibits, or museum exhibitions that are conceived and deployed on a much shorter timeline in order to respond to a pressing contemporary issue. “We did that exhibition in about 45 days,” Trent says. “It was a collaborative project, different from our usual format. But it was something that was really important for us to do — to address a critical human rights crisis in this country in the moment, as it was in the news cycle and as it was happening.”

Rapid-response exhibits are evidence of some of the changes happening within the museum field, as these cultural institutions grapple with their place in communities that are not only dealing with intense and divisive social justice issues — officer-involved shootings, Islamophobia, and immigration rights, among others — but also expect immediate, often unfiltered, responses to current events via their social feeds and 24-hour news channels.

Rapid-response collecting, in which museums acquire contemporary artifacts, has been a growing trend for almost two decades. The New York Historical Society collected items found in the aftermath of the September 11, 2001 terrorist attacks, and sends out “history brigades” to major events like the Women’s March to collect items from activists. The National Museum of African-American History and Culture, even before opening to the public, sent curators to Ferguson, Missouri, after the 2014 killing of Michael Brown and the ensuing protests. And the Victoria & Albert Museum in London opened a full Rapid Response Collecting gallery in 2014.

Rapid-response exhibits, however, which curate those items to tell a full contemporary story, are a more recent development. While it’s challenging to pinpoint the exact origins of this movement, Brenda Tindal, a museum practitioner and historian, is one of the earliest pioneers of the rapid-response exhibit.

Currently the director of education and engagement at the forthcoming International African American Museum in Charleston, South Carolina, she was working as staff historian at the Levine Museum of the New South in Charlotte, North Carolina, when in September 2016, Keith Lamont Scott was shot by a Charlotte-Mecklenburg police officer

The officer-involved shooting set off intense protests in the Charlotte community that resulted in the death of one protestor as well as dozens of arrests. The climate became so unstable that downtown Charlotte was shut down for several days.

“We found ourselves in a situation where it was very necessary for us to create room for community members to heal,” Tindal says. “So we opened up our museum to the community for free over that weekend. Our idea was to invite people back to downtown Charlotte because it had been shut down.” 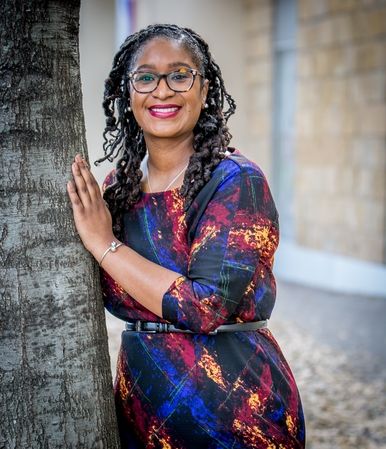 Throughout the following months, Tindal and the Levine team hosted several community events around the shooting, including a town hall that attracted a standing-room-only crowd. Tindal delivered a talk on the shooting that contextualized it within Charlotte’s larger racial history, focusing not only on the recent unrest but also the socio-economic and social justice issues — education, housing, and criminal justice, for example — that were contributing to the city’s current state of affairs.

“To me, the town hall meeting was perhaps the greatest indicator that we needed to do more,” she says. That’s when she and her team decided to develop the rapid-response exhibit “K(NO)W Justice, K(NO)W Peace” — so named after the Charlotte protesters’ chant “No justice, no peace.”

The exhibit was developed in collaboration with Tiffany Packer, a professor at Johnson C. Smith University who had developed a public history course on officer-involved shootings, and with the photographer and image activist Alvin C. Jacobs, Jr. Jacobs’ images of both the Charlotte protest and other protests of officer-involved shootings added a perspective that was both deeply local, and informed by the wider, national protest movement.

The Levine also crowd-sourced artifacts from community members who had either participated in or witnessed the protests, creating a visual component marked by an unusual degree of immediacy. As Tindal writes in an article for the February 2018 issue of “The Public Historian,” these artifacts included:

“It could easily have taken the full year to do both the research, and then fabricate the exhibition. We did it in three months,” Tindal says.

That shortened timeline is only possible when the museum staff or team is able to focus their resources and efforts tightly onto a single exhibit, which is how both the “K(NO)W Justice, K(NO)W Peace” and “I AM A CHILD” exhibits were developed and deployed so quickly.

“I think the way we were able to put a pause in our exhibition development process and say, we’re going to shift focus for a minute and collaborate with two artist-activists to get this done in a very meaningful way — that’s what’s unique,” says Trent.

Rapid-response exhibits can also offer a side benefit of attracting a wider audience than a museum may generally see. That was the case at the Levine, Tindal says. “In any community, I feel like we often communicate in silos. I really feel like this exhibition and the programming we created as part of that brought people together across those silos … We definitely saw a diversification in terms of visitors who came specifically to see ‘K(NO)W Justice, K(NO)W Peace.’”

It may be too early in the development of rapid-response exhibits to draw definitive conclusions as to how they affect the communities they serve. However, what is certain is that museums, like many cultural institutions today, are asking themselves important questions about not only the stories they tell, but the ways that they tell them. At least when it comes to rapid-response exhibits, it seems that the visual exhibits alone aren’t enough. The real power comes from creating opportunities for community engagement around those contemporary exhibitions.

“Being responsive isn’t just limited to what you do with your exhibitions,” Tindal says. “Programming also becomes a really important platform for engaging communities around issues that are acrimonious, or of great interest to the community.”

Elizabeth Pandolfi is a freelance arts and culture journalist. She is the former arts editor of the Charleston City Paper, and her work has appeared in Art and Antiques magazine, Charleston magazine, WNC magazine, and other publications.