How Oregon’s Radical Decriminalization of Drugs Was Inspired by Portugal 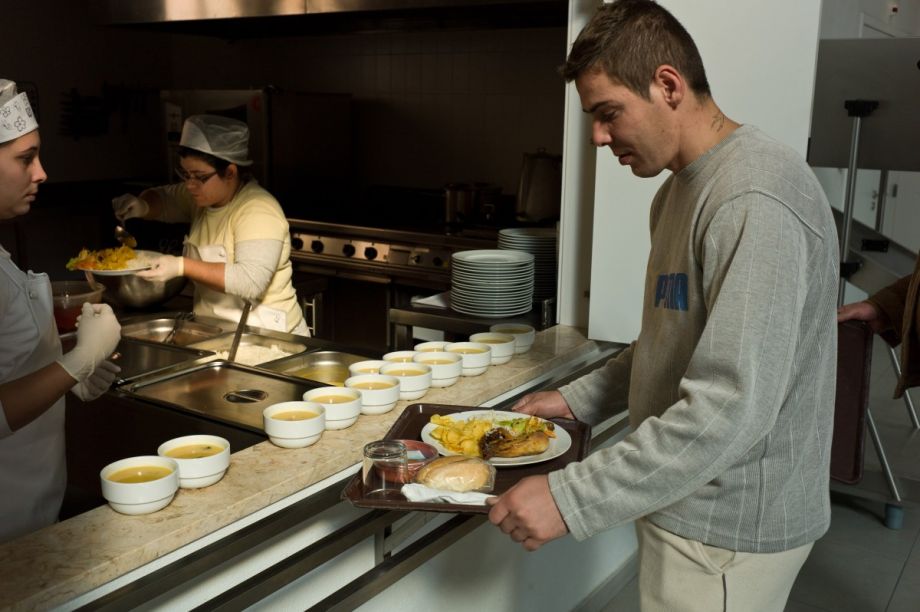 In this Nov. 30 2010 picture, Tiago picks up his lunch from the kitchen of a treatment center in Lisbon, Portugal. At the treatment center where he lives, he plays table tennis, surfs the Internet, watches TV and also helps with cleaning and other odd jobs. And he's back at normal weight after dropping to 50 kilograms (110 pounds) during his addiction. Portugal decriminalized the use of all drugs in a groundbreaking law in 2000. (AP Photo/Armando Franca)

Editor’s note: Since this story was originally published in January 2021, a number of states have introduced bills inspired by Oregon. According to the Drug Policy Alliance, those states include Kansas, Maine, Maryland, Massachusetts, Rhode Island, New York, Vermont, Virginia and Washington state.

On Election Day 2020, the people of Oregon voted overwhelmingly to decriminalize all drugs, including Schedule IV drugs like cocaine and heroin. 58 percent of voters said “yes” to Measure 110, which reclassifies possession of controlled substances from a misdemeanor to a violation with a $100 fine. The law will also shift over $100 million a year of marijuana tax revenue to support addiction recovery.

Proponents hope that the measure will usher in a drastic change for Oregon, which could go from being one of the worst states at providing treatment for addiction to one of the best. In 2016-2017, Oregon ranked first in the country for pain reliever misuse, second in the country for meth amphetamine misuse, and fourth in the country for cocaine and alcohol misuse, according to the National Survey on Drug Use and Health. Nearly 10 percent of Oregonians had a substance use disorder, according to the same survey. The state ranked 48th in access to treatment.

Now that Measure 110 has passed, advocates still have work to do to make sure it is not delayed or watered down by the state’s legislature. They also want to keep the grant-making authority within a newly formed Oversight and Accountability Council, which will consist of people in the harm reduction and treatment community, formerly incarcerated people and people with substance use disorder. Some preferred grants to be disbursed by the state’s existing Alcohol and Drug Policy Commission.

The model legislation was written by the non-profit Drug Policy Alliance, which also contributed $4.6 million to the Yes on 110 campaign. It was based on the model of Portugal, which decriminalized hard drugs in 2001, but tailored with recommendations from Oregon’s recovery community, according to Matt Sutton, Director of Media Relations at the Drug Policy Alliance. The Alliance organized a trip to Portugal with over 70 advocates to learn from the country’s approach.

In Portugal, those caught using drugs for personal use are sent to a commission composed of health experts and a legal expert. The commission evaluates the person’s drug use and, if necessary, refer them to voluntary treatment. (While most treatment is voluntary, in some cases, the commission can choose to issue a fine or mandate some form of therapy.) Additionally, the country expanded access to treatment and harm reduction services like needle exchanges.

The impact was stark: drug-induced deaths went from 36.2 per million in 1999 to 4 per million as of 2017, according to the European Monitoring Centre for Drugs and Drug Addiction (EMCDDA). The portion of new HIV/AIDs diagnoses attributed to drug use dropped from 52 percent in 2000 to about 2 percent in 2017. The amount of people incarcerated on drug-related charges dropped 43 percent between 1999 and 2016.

Oregon’s approach will be similar, focusing on diversion and harm reduction for people who use drugs and retaining punitive approaches for drug trafficking. Per Measure 110, persons with small amounts of drugs on their person will receive a $100 ticket rather than face arrest. The fee can be waived if the person gets a health assessment at one of the dozens of new addiction recovery centers that will be built throughout the state, based on the state’s existing health service areas. The centers will be run by the Oregon Health Authority and will provide case management, links to services and individualized intervention plans for those who request it. Anyone will be able to access Oregon’s new addiction recovery centers, whether or not they’ve had an interaction with the police. The measure also diverts money to transitional housing, expanded needle exchanges and outpatient services.

The recovery centers have to be fully operational by October 1, 2021, must provide 24/7 services and be free of charge. Much like in Portugal, treatment will be non-coercive, so people will not be forced to accept treatment to satisfy a court mandate.

The decriminalization of hard drugs in Oregon will take effect on February 1, 2021, and grants will begin going out in summer. Sutton says this implementation is relatively fast. “Usually legislation like this passes, sometimes it takes years. This is a very aggressive timeline,” he says.

Projections for how these changes will impact Oregonians are dramatic. According to an analysis of the bill by the Oregon Criminal Justice Commission, racial disparities in drug arrests would decrease by 95 percent under the law. There would be 1800 fewer felony convictions a year and 1900 fewer misdemeanor convictions across the state, according to the analysis.

The funding for expanded services came through a higher than anticipated bounty from marijuana taxes. In 2014, when marijuana legalization passed, the state estimated it would generate $45 million a year. But in 2019, revenue exceeded $100 million. As of September, revenue exceeded $133 million for 2020. Everything over the state’s original $45 million estimate will go toward measure 110’s additional treatment resources.

Measure 110 is a welcome change to those who found that the old way was not working, including Janie Gullickson, the executive director of Mental Health and Addiction Association of Oregon, an organization that takes a peer support approach to addiction, pairing people with addictions to others who’ve had the same experience.

Gullickson has faced the criminalization of addiction firsthand. She experienced addiction for 22 years, including 8 years when she was incarcerated for what she says were drug-related offenses. Gullickson was an IV meth user and says it led to mental health issues as well as bouts of homelessness. She cycled between jail and emergency departments, wanting treatment but unable to find any. She says she was only able to find treatment in prison, in a six-month addiction and recovery program that included cognitive behavioral therapy.

“I finally got treatment in prison. That’s backward,” she says. When she finally received treatment, she asked program administrators why no similar addiction recovery program was available to her on the outside. “They said, Oh, it’s too expensive,” Gullickson says. “I wonder what I cost the system all those years.”

Advocates face hurdles to make sure Measure 110 is effective, beginning with fighting ongoing attempts to delay or dilute the law.

Oregon Senate president Peter Courtney suggested the rollout should be delayed because of the scope and size of the changes. And lawmakers could drastically change the law in the legislature next year.

“I think the biggest challenge is ensuring that the will of the voters is protected and the legislature doesn’t try to change things around,” says Matt Sutton at Drug Policy Alliance. The law was opposed by law enforcement organizations and a statewide non-profit called Oregon Recovers, which disagreed with dismantling the existing court-referral system for addiction treatment. “I’m sure they will make it their goal to screw things up a little bit,” Sutton says of opponents.

Even if all goes according to plan, there isn’t consensus on whether the nearly $100 million in added yearly funding for addiction treatment will be enough to support everyone who needs it. While the Drug Policy Alliance says that everyone who wants it will be able to get treatment, others aren’t so sure. Prior to Measure 110, the state and federal government were already spending $235 million a year in public funds on substance abuse prevention and treatment, according to the Oregon Criminal Justice commission, and still having some of the worst outcomes in the country.

According to the European Monitoring Centre for Drugs and Drug Addiction EMCDDA Portugal’s public funding for substance use prevention and treatment was .05 percent of the country’s GDP in 2009-2012 and 0.03 percent of GDP between 2013 and 2016. This is on par with what Oregon already spends on treatment but, crucially, most people in Portugal have government-funded healthcare and there is an overall more robust social safety net, which makes it easier to divert people to treatment.

Additionally, the United States is starting out with a higher rate of drug arrests than Portugal had in 1999. These differences were highlighted in a report by Drug Policy after their visit to the country.

“In an already over-taxed, under-funded state as I’m sure a lot of states are right now, how far will it go statewide?,” asks Gullickson. She says prioritizing the money will be important. “We want to be first and foremost responsive to those who’ve been impacted, communities of color, the LGBTQ community,” Gullickson says. “Very quickly $100 million can be used up, so how do we prioritize?

But Drug Policy Alliance is optimistic that this legislation will lead to a cascade of legislation in states across the country, all borrowing from the model legislation introduced in Oregon. There are currently efforts underway in Washington, California, Vermont and even at the federal level.

“People are understanding that drug addiction is a public health issue that will not be solved by punishing people,” Sutton says.

Gullickson says there’s much more work to be done to change the culture around drug addiction. She says there is still a lot of stigma surrounding drug use in Oregon, and hearts and minds will not be changed instantly.

“It’s going to take time and continued effort and the will of the people,” Gullickson says. “It takes all hands on deck to make this sort of change, and change is hard.”