How Minneapolis Managed a Massive Homeless Encampment – Next City 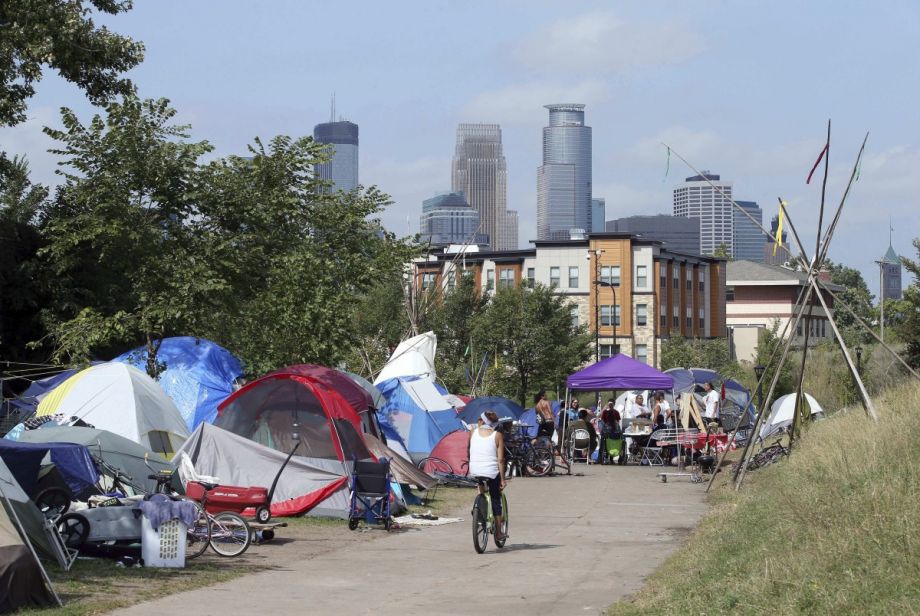 In this file photo from September 2018, the Minneapolis skyline rises above the “Wall of Forgotten Natives” homeless encampment. A few weeks after this photo was taken, the City Council voted to approve the Red Lake navigation center, which is providing temporary housing to the people formerly living in the encampment. (AP Photo/Jim Mone)

Last summer, what would become the largest homeless camp in Minneapolis began to pop up near the intersection of Franklin and Hiawatha Avenues. Culminating in an encampment that swelled to over 300 tents in the fall of 2018, fires began to break out from the use of space heaters to battle the dropping temperatures; a handful of residents died, some from drug overdoses; and sparring among aid groups was reported.

Yet the city declined to clear the encampment at every turn, instead partnering with local organizations to transition residents into temporary—and eventually—permanent housing in the form of a 109-unit apartment building slated to break ground in June 2019.

While small collections of people experiencing homelessness is nothing new, the size of the Franklin-Hiawatha camp made it one of the largest ever in the state. “In the beginning there wasn’t as many people in the camp, so… it was seen as a smaller issue,” explained Sam Strong, the Secretary of the Red Lake Nation, the governing body of the Red Lake Band of Chippewa Indians, which have an office and offer services in Minneapolis. As the encampment grew, it offered the mostly-Native American residents a sense of community and relative safety. The site’s location along a highway sound wall earned itself a nickname: the “Wall of Forgotten Natives”. With the encampment’s increasing size, it became clear that the typical sweep-and-clear method—a displacement of residents back onto the streets that erodes trust between the homeless population and law enforcement as well as outreach workers—wouldn’t suffice.

“That’s kind of the standard operating procedure of cities… the role is to keep [encampments] small and under the radar. Out of sight, out of mind,” Strong added, before crediting the city for taking a different approach. “One thing I did recognize pretty early on was that there was a different mentality within the city government, specifically the mayor,” noting that he believes the mayor instructed city personnel not to clear the site.

In September, Red Lake Nation offered up a slice of the tribe’s property on Cedar Avenue near the encampment as a site for developing a low-barrier Navigation Center, a temporary housing facility that keeps residents safe while connecting them to social services. The city allocated $1.5 million to support the project’s development and various philanthropic organizations made donations as well, such as $1 million from the Catholic Communities Foundation.

What would typically be something like a six-month project, the Navigation Center’s construction was completed in roughly eight weeks thanks to the expertise that Simpson Housing Services, a local non-profit that has been addressing homelessness since the early ‘80s, lent to the project and cooperation from various city offices. “The flexibility and the sense of urgency among city departments—zoning, planning, permits, fire departments. They really came to the table and pushed in order to get this done,” said Steve Horsfield, the executive director of Simpson Housing.

The 120-bed Navigation Center began accepting its first residents in mid-December, and by late December, everyone had moved out of the encampment—some 70 residents even into permanent housing.

The temporary housing at the Navigation Center includes three heated tents and offers meals, showers, and access to services designed to connect residents with pathways to permanent housing, income, and healthcare. While violence or using drugs or alcohol is not allowed on the premises, intoxicated individuals are not turned away, the structure is open 24/7 without curfew, and purposefully has as few rules as possible.

The transition from the encampment to the shelter was a smooth one, largely because of the culturally relevant approach that partners have taken. The staff at the Navigation Center is over 50 percent Native American and traditional Native American healing practices are available as part of the approach the center takes to treating and managing addiction. “A big part of this project for us is giving [residents] access to who they are as individuals and a purpose in life. We’ve had success because they want to be a part of that,” explains Strong, noting that traditional teachings and positive cultural events are keystones of Red Lake Nation’s approach to recovery.

“It’s been interesting for us [at Simpson Housing] to learn about some of the native traditions and healing practices… We see it all playing out in the community at the Navigation Center and it’s awesome and powerful,” agrees Horsfield. Throughout the Navigation Center process, Horsfield has begun to realize that the shelter system has been operating based on an “old, white churches” model and that addressing homelessness from a different, more culturally appropriate angle has been an advantage. “I hope that we have useful learnings from this and things we can use moving forward,” he adds.

The Navigation Center will be open until May 2019. Until then and beyond, Red Lake Nation’s goal is to get residents into not only permanent housing, but eventually in recovery and back into the workforce to ultimately prove that the approach taken to address the Franklin/Hiawatha encampment can work. Eventually Red Lake Nation hopes to build a permanent Navigation Center for their people. In the meantime, they will be breaking ground on a 109-unit apartment complex in June 2019, a project that has been in the works since 2016.