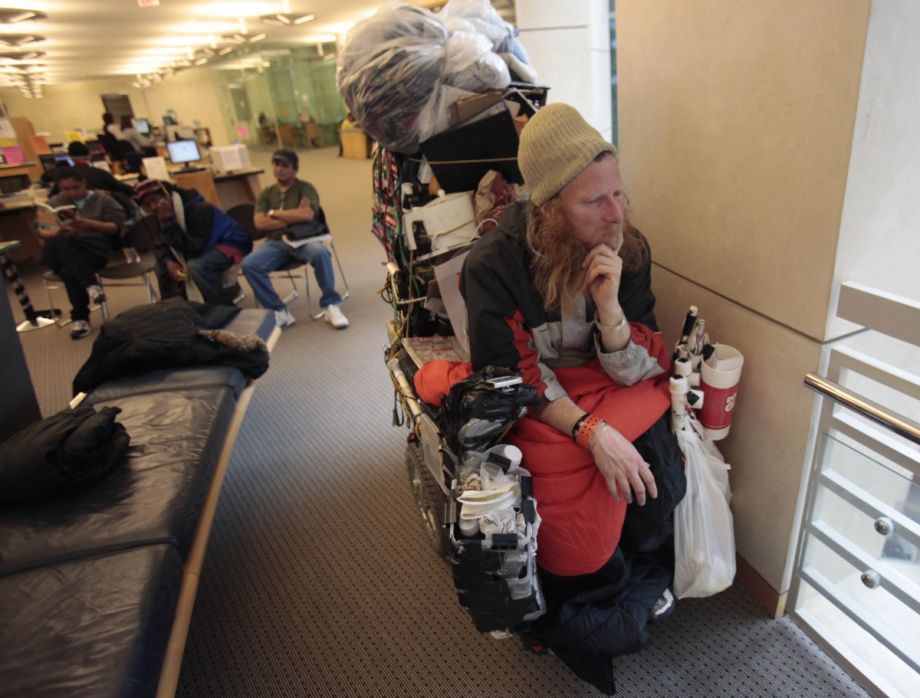 With more people than ever before with mental health problems and basic needs such as food and shelter, libraries like this one in San Francisco are adding new services to their repertoire. (AP Photo/Marcio Jose Sanchez, File)

When the Mission Bay Branch Library opened in San Francisco, in 2006, there was no other project quite like it.

Part of a neighborhood-wide redevelopment of Mission Bay, a formerly industrial area near the eastern edge of the city, the development was more than just a new library. In addition to the 34,000 items in the branch’s collection, there was retail space, a community meeting hall, a health center, and around 140 housing units for very-low-income seniors, some of whom were transitioning out of the nearby Laguna Honda long-term-care hospital.

Twelve years later, a member of the San Francisco Board of Supervisors is wondering, what about the other 27 library branches?

In a meeting last week, the San Francisco Examiner reported, District 1 Supervisor Sandra Lee Fewer, who was inaugurated last year, asked acting librarian Michael Lambert whether future library renovations could incorporate an affordable housing component. The amount of public land available for affordable housing is limited, she noted, and branch libraries tend to be low-density construction. Why not build on top of them and address one of the nation’s worst housing crises at the same time? Lambert responded that the library could consider such projects down the line, though it has no plans in the works currently.

The exchange was only an informal one, but it highlights the increasingly catchall public-service role of the American library. In U.S. cities, librarians and library properties already provide crucial services to people experiencing homelessness, job-seekers, and victims of opioid overdoses, as well as the millions of students and readers who make up their traditional constituency. Could they help create housing in competitive urban real estate markets, too?

“We are in an affordability crisis and we need to maximize our existing public land for 100 percent affordable housing,” Supervisor Fewer tells Next City in an email. “It would be a missed opportunity to not pursue adding affordable housing above newly renovated public resources, like our libraries.”

It’s question coming up beyond San Francisco. Across the U.S., there are 9,057 library systems (184 in California alone), with nearly 17,000 locations adding up to more than 209 million square feet (17 million of that in California), according to the Institute of Museum and Library Services. Chicago broke ground on an affordable housing-library combo earlier this year, and New York City is planning one of its own.

Around the time that the San Francisco Public Library Mission Bay branch was built, the city was in the midst of its Branch Library Improvement Program, funded by a $105.9 million bond initiative that was approved in 2000. That program has since concluded, and the San Francisco Public Library, which just this week was named Library of the Year, doesn’t currently have any big renovations or construction projects in the works.

“The Library is certainly open to such creative strategies for future library capital projects,” said Acting City Librarian Michael Lambert in a statement sent to Next City. “There are no plans currently for new branches and the Library will need to complete a comprehensive facilities master planning process before we’ll be in a position to actualize such an option.”

A library spokeswoman said that no one who was involved in planning the Mission Bay development project is still around to speak about it.

Sharon Christen, a housing developer at Mercy Housing who served as project manager for the development, says that her group was selected to build an affordable housing project in the neighborhood back in 1999 or 2000. The overall redevelopment of the neighborhood was being led by the San Francisco Redevelopment Agency and Catellus Development Corporation, and involved large-scale market-rate housing and commercial development. Some of the land was given back to the Redevelopment Agency by Catellus and set aside for affordable housing. It was only after Mercy Housing was selected to build senior housing that a new branch library was added to the project.

The idea was that, “You’re building out this new neighborhood, and you need to have these civic uses,” says Christen. There were other amenities either planned or already built in the area, including transit lines and a grocery store, she says. It seemed more efficient to incorporate civic uses in with housing, rather than keeping everything separate. So Mercy Housing was given a construction easement on the property with the expectation that it would revert to city ownership when the project was complete. Land ownership issues were smoothed over by the San Francisco Redevelopment Agency, which was dissolved, along with the 400 other redevelopment agencies in California, in 2012.

“It’s not impossible to do these things without Redevelopment,” Christen says. “Redevelopment just had certain powers that made it easier.”

Christen says it’s far easier to plan a mixed-use project that incorporates housing and civic uses from the outset than it would be to build new housing on top of old library branches. In Mission Bay, there was so much “development potential,” in the form of lot size and allowable height available in the area, that each of the components of the project was able to make the financing work. Those considerations are more tricky on constrained sites, Christen says.

“Once you build a building together, that’s hard, and then you have to live together for the rest of your lives,” Christen says.

But the Mission Creek Senior Housing project now operates smoothly alongside the Mission Bay Branch Library, Christen says. And if the city’s public library system gets more capital funding down the line, or residential development creates demand for another new branch, it has a successful model for a co-located library and housing project to study.