How I Got to Know Federal Home Loan Banks and Why You Should, Too – Next City

How I Got to Know Federal Home Loan Banks and Why You Should, Too 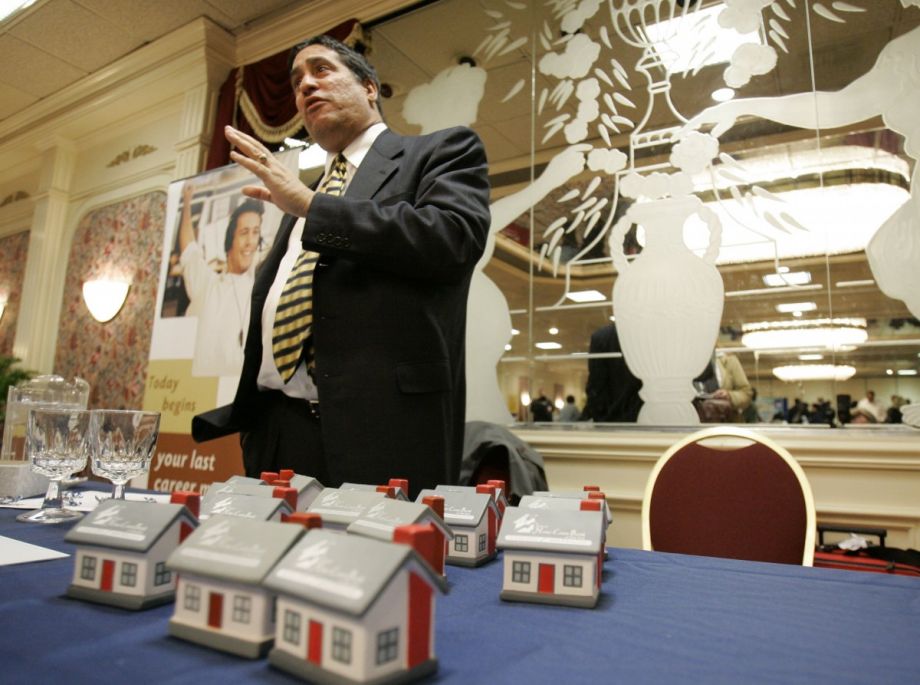 Antonio Velaquez, a representative of Federal Home Loan Bank of New York, talks with job seekers at a job fair sponsored by Monster.com at a hotel in Newark, N.J., in this 2008 file photo. (AP Photo/Mike Derer)

The notion that the U.S. banking system exists purely for the benefit of profit-hungry investors is a myth that investors love to perpetuate. A few years ago, I stumbled across a prime example of the public-oriented foundation upon which the entire banking system rests. It’s not just a public-relations talking point — banks and credit unions in the U.S. depend on institutions created by and for the public, including the Federal Reserve, the Federal Deposit Insurance Corporation, and the Federal Home Loan Banks.

Along with Fannie Mae and Freddie Mac, the Federal Home Loan Banks fall under the regulatory supervision of the Federal Housing Finance Agency, which recently got a new director appointed by the Trump Administration, Mark Calabria. With the new appointment, banking and housing folks expect much debate over the near future of Fannie Mae and Freddie Mac, but the Federal Home Loan Banks shouldn’t be totally ignored, especially by anyone who thinks the banking system needs to become more accessible to historically disinvested communities.

Most people outside banking or affordable housing have never heard of the Federal Home Loan Banks. Created by an act of Congress in 1932 — the first in a series of entities, along with Fannie Mae and the Federal Housing Administration, created to kickstart home mortgage lending during the Great Depression — the Federal Home Loan Banks borrow money from global investors and lend it to member banks and credit unions to provide liquidity for lending.

While they have the implicit backing of the U.S. government, Federal Home Loan Banks are financially self-sufficient, requiring no taxpayer support. With a trillion dollars in loans to members and other assets on their books, FHLBs are deeply infused into the U.S. banking system, despite flying mostly under the radar to people outside the housing and banking worlds.

Federal Home Loan Banks are cooperatives — each of the eleven FHLBs are owned and governed by their member institutions, mostly community banks and credit unions. They only make loans to their members, and they don’t take deposits. There were 12 banks at first, the same number as Federal Reserve Bank Branches, but FHLB Seattle and FHLB Des Moines merged in 2015.

Their history isn’t all so rosy. Between 1934 and 1962, the FHA and later the Veterans Administration helped encourage more than $120 billion in home mortgages, and 98 percent of that went to white borrowers. The FHLBs provided liquidity for private lenders to make those loans — only many of them were made under the agreement that homes wouldn’t be sold to black buyers. Even after Supreme Court rulings outlawed such agreements, federal agencies, lenders, real estate brokers, and planners found ways to perpetuate the practice.

But FHLBs have been evolving. For instance, despite the “home” in the banks’ name, members can now borrow from their regional FHLB to support loans for small business or community development and revitalization, based on the fairly obvious notion that more widespread economic growth means more people who can afford to buy a home. The recent changes won’t mean FHLBs will correct for massive historical injustices — they didn’t create the racial wealth gap by themselves, after all, but the evolution of FHLBs could at least expand the flow of capital to finally include those neighborhoods once excluded because of the skin color or national origin of who lived there.

In the most recent quarterly report available from the Federal Home Loan Bank system, 24 community development loan funds across the country had borrowed $206 million from their Federal Home Loan Bank, up from $162 million borrowed at the end of 2017. Natalie Gunn, the chief financial officer at Capital Impact Partners, a community development loan fund based in the D.C. area, told me about how loan funds like hers are starting to integrate FHLB borrowing into their business models, supporting health centers, charter schools, mixed-use projects with low- or middle- income housing, or community-owned grocery stores.

Each FHLB has its own elected board of directors, giving each a unique identity and branding and also unique programs, including grant programs, created largely at the behest of board members (and with the approval of their collective regulator, the Federal Housing Finance Agency). FHLB Chicago, for example, created what they call the Community First Fund, providing flexible, low-interest capital to non-member community development loan funds in its region to expand and deepen the work they do, as I wrote about previously.

The board of FHLB San Francisco took an unprecedented step recently, setting aside $100 million out of the bank’s retained earnings to seed the Quality Jobs Fund, a partnership to support lenders in California, Nevada or Arizona who want to encourage the growth of businesses that pledge to take concrete steps toward improving wages and benefits for employees. They placed the $100 million into a donor-advised fund at the New World Foundation, with the agreement the foundation would use those dollars to invest or make grants to lenders after careful evaluation of their strategies to support quality job growth in the three target states — as a roundabout way, once again, of creating more homeowners. By going through a donor-advised fund mechanism, FHLB San Francisco didn’t have to seek approval from federal regulators to create the fund.

Pacific Community Ventures, a community development loan fund based in the Bay Area, was one of the first to get capital — a ten-year, $3.2 million, zero-interest loan — from the Quality Jobs Fund. Pacific Community Ventures set goals to make between 60-80 loans in two years, totaling between $4.8-5.8 million, to Bay Area small businesses. At least 80 percent of the loans will go to minority-owned businesses, and at least 80 percent to businesses located in or hiring from economically distressed communities. They expect those businesses to employ up to 500 people with median hourly wages of at least $16 an hour. They’ll also provide free advisory services for businesses to add basic employee benefits, retirement plans, on-the-job training, and offer predictable scheduling — even offering financial incentives to encourage those businesses to do so. If they meet their goals after these first two years, Pacific Community Ventures won’t have to pay back part of the original loan.

FHLBs are reliably profitable, collectively earning $3.5 billion in net income as a group in 2018. While most of those dollars typically get paid back to members as dividends, as a cooperative each bank’s board has the authority to create partnerships funded out of each regional FHLB’s retained earnings, like the Quality Jobs Fund. They just have to justify such partnerships as strengthening the housing market in some way.

One thing I have yet to see: significant activity among community organizers to open up regular lines of communication with the eleven FHLBs. FHLB San Francisco did embark on a listening tour in 2016, hearing from local policymakers, economic development agencies, and others — and the listening tour helped shape the Quality Jobs Fund.

But, while FHLBs are subject to heavy regulation from the Federal Housing Finance Agency, I still find it striking that this place-based, cooperatively-owned network of financial institutions doesn’t seem to have much dialogue with or pressure from grassroots organizers. The FHLBs have helped transform the U.S. economy before. With a broader dialogue about their role and capabilities, who knows what FHLBs might be able to do going forward?