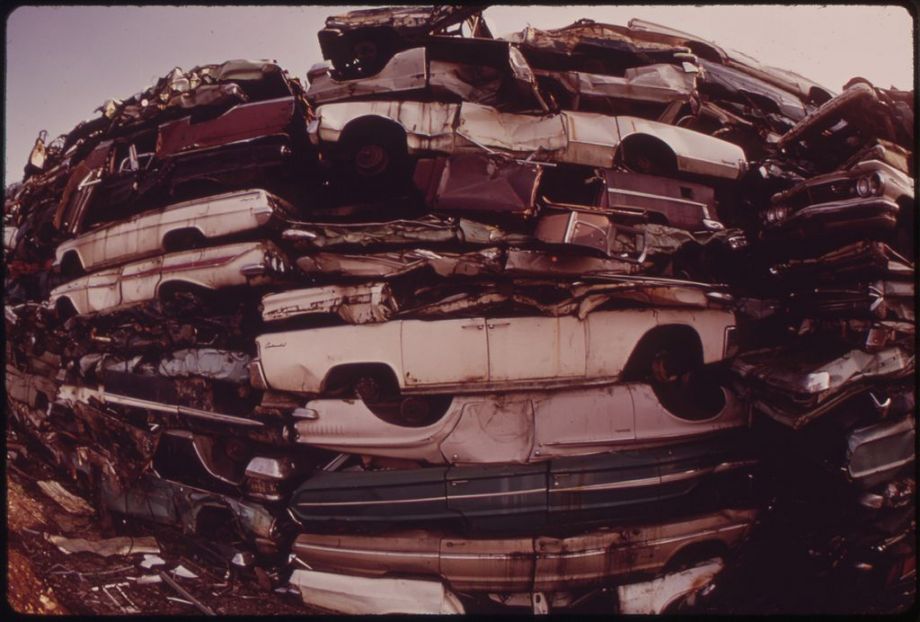 The transmission on my 10-year-old Ford Focus finally went bust on a country road in northern Indiana. I heard a hard thunk from beneath the engine block, and suddenly, second gear was gone. So was fourth gear. I drove the last hundred miles home to Chicago with the car lagging as I accelerated out of red lights, and revving in a frighteningly high key on the expressway.

“Gonna cost fifteen hundred for a new transmission,” my mechanic said. “But if you want, I’ll buy it from you for five hundred. My niece is looking for a car.”

“How about a thousand?” I countered.

That was exactly how much I’d paid for a brake job the month before. My mother had once told me the time to get rid of a car is when you’re on a first-name basis with your mechanic.

And just like that, for the first time in my adult life, I was carless. Reduced to the same transportation options I’d had when I was a junior high schooler riding a ten-speed bike to the video arcade. I’ve always loved cars. I went to high school across the street from an auto plant in Lansing, Mich., a city that took its identity from the Oldsmobile. I subscribe to Motor Trend. Every February, I go to the Chicago Auto Show, sit in a Ford Mustang V-8, and think, “Maybe this year!” But I’d long realized that owning a car was not essential to my big-city life, and in fact, was becoming a hindrance. I live in Rogers Park, a congested lakefront neighborhood also known as “Rogers No Park.” At night, I sometimes spent 15 minutes trolling for a space, before leaving my car blocks from home.

Also, in the last few years, Chicago has become a more hostile, more expensive city for motorists. Parking rates quadrupled after the city sold the meter concession to a private vendor. Red-light and speed cameras spit out $100 tickets for rolling right turns on red or driving 10 mph over the speed limit — mistakes I can’t afford to make. They factored into my decision to stop driving. Plus, a new car would have meant five more years of payments and collision insurance. Paying off the Focus was one of my life’s great moments of financial liberation, and I didn’t want to go back. A car is a terrible investment: it depreciates as you pay interest.

Three months later, I don’t miss my car at all. I don’t miss trying to remember where I parked it, worrying about whether it had been ticketed or stolen, or paying $3.99 for a gallon of gas. (Chicago has the highest prices in the nation.) My father offered to sell me his Ford Escape SUV for $5,000, but I turned him down. Where would I park that monster?

Plus, I live next door to a parking lot with two iGo cars, and I rent from Enterprise when I go out of town. A car is now an option for long-distance trips, not an expensive possession I pay for whether I use it or not.

I now get around Chicago on a $200 used bicycle. Going from driving to cycling has both narrowed my world, and magnified it. I don’t go as many places, but I learn more about the places I do. Last week, I rode to the Loop and back, a 20-mile round trip I would normally take on Lake Shore Drive or in a CTA L car. Along the way, I saw a shooting set for Transformers 4, a new neighborhood library, and an 8 a.m.-2 p.m. tavern that looks like it’s survived every threat to day drinking from Prohibition to gentrification. I stopped to eat at a breakfast diner and a Middle Eastern restaurant. And I had a brake cable rethreaded at a bike shop in the West Loop, a neighborhood I’d only driven through before.

Here’s another reason the car-free life is economical: it’s hard to go anywhere you can spend a lot of money. And if you make it to a shopping mall, it’s hard to buy anything you can’t carry home in a backpack. The only thing I miss about having a car are my regular trips to Hawthorne Race Course, but I’m betting on fewer losing horses.

If you absolutely have to buy something big, or hard to find, there’s the Internet. One of the bartenders at my neighborhood tavern (where I now spend more time, because it’s a 10-minute walk), often goes weeks without leaving Rogers Park.

Before the car became an essential lifestyle item, that’s how people lived in big cities, although those urban provincials didn’t travel much because everything they needed — clothes, furniture, beer, religion — was on the nearest busy street. As Mike Royko wrote of Mayor Richard J. Daley’s early 20th-century upbringing: “He grew up a small-town boy, which used to be possible even in the big city. Not anymore, because of the car, the shifting society, and the suburban sprawl.”

Chicago may again become a confederation of siloed neighborhoods. Gabe Klein, the city’s recently departed transportation commissioner, believes the single-car lifestyle could become obsolete in urban areas within 20 or 30 years.

A survey by Zipcar found that 65 percent of Millennials say losing their computer or phone would cramp their style more than losing their car. And 73 percent would rather shop online than drive to a store. Millennials think cars are expensive, bad for the environment, and waste time that could be better spent riding a train and monitoring social media on smart phones. So I may be ahead of my time.

I’m not disavowing car ownership. If I ever move to a house with a garage, I’ll try to put a Ford Mustang inside it. But for me, car life and city life no longer go together.