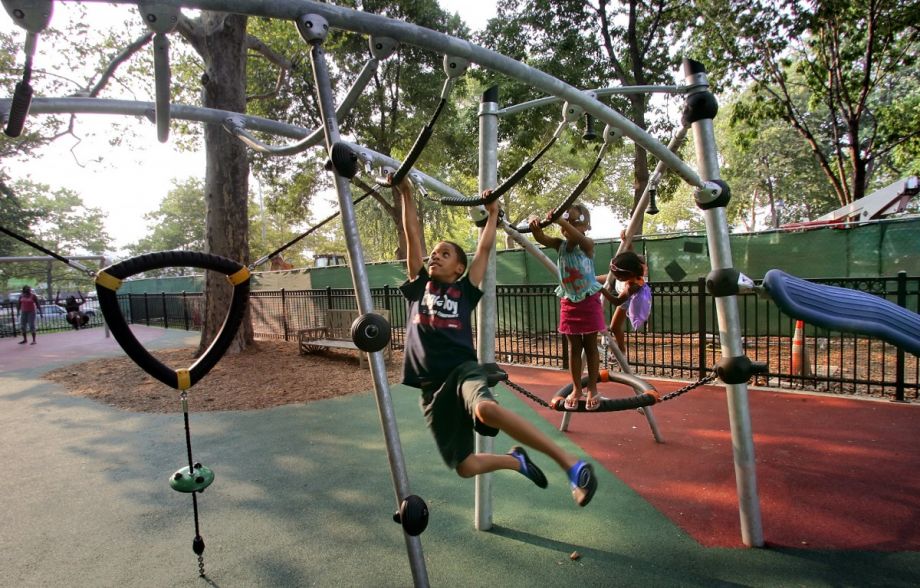 Philadelphia’s Franklin Square got a makeover in 2006. (AP Photo/George Widman)

As America’s millennials become parents, U.S. cities are hoping to keep that generation from returning to the suburban life many had growing up, and Philadelphia is one place struggling to prove that it’s a welcoming environment for children and families. On top of its school and library headaches, the evolving literature on childhood play is outmoding the city’s tattered blacktops and cookie-cutter playground equipment.

“I think there’s a growing movement among educators about the importance of play,” says Chris Mohr of Philadelphia’s Community Design Collaborative, “The way we’ve designed our cities — and suburbs — reduces the amount of time kids spend outdoors doing structured free play, but researchers are finding that it’s a critical component of learning and early development.”

With the help of Azavea fellow Tim St. Onge, the Design Collaborative has embarked on an effort to identify and prioritize the revitalization of Philadelphia play spaces in most need of investment. (The Collaborative’s volunteer architecture and planning professionals provide pro bono design assistance to low- and moderate-income communities, and the Philly-based Azavea, a GIS firm, also does pro bono work.)

“A lot of the schools and the parks in Philadelphia are totally covered in pavement, and they’re not really friendly green spaces to hang out in,” says Azavea’s Daniel McGlone.

Instead of just relying on visual cues or community voices to alert them to a site’s candidacy, St. Onge performed a suitability analysis of recreation sites in the city using GIS to help inform the selection of possible grant sites.

He began his project considering walkability. Where are the schoolyards, playgrounds and parks that a family with a stroller could easily get to on foot? He proceeded to layer street, sidewalk and highway data with socioeconomic indicators. He also added in open space and the city’s impermeable surfaces to get a clearer picture of which communities were over- and underserved. 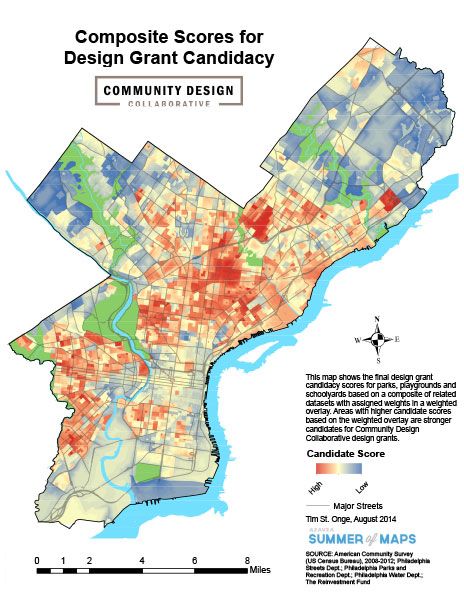 Given what park design does to one’s brain, the team really dug into the layer containing data on impervious surfaces. “There have been a lot of studies that have been done that when people are around green space, it reduces stress and makes for a more pleasant living environment,” McGlone notes.

Though the mapping is a critical part of the project, the sites that St. Onge recommends are not necessarily going to be the ones the Design Collaborative is going to select moving forward. “We can’t simply use numerical ranking to pick a site,” says Mohr, on one of the lessons of this exercise. The data might suggest a smattering of sites that would benefit greatly from funding and visioning, but without local caretakers, it’s hard to imagine a project really getting off of the ground.

“The human element is critical,” he continues. “The capacity of organizations in the neighborhood, the interest in the neighborhood, and the interest of potential partners or institutions that might want to work on implementing design. We only do the preliminary design — the conceptual phase — in order to give people a plan or a road map. But it’s really up to the community to then say, ‘We have this process. We have a vision. Now we want to move ahead as a community.’ At that point it’s really up to them.”

Join our conversation about building a more family-friendly Philadelphia on October 29 at Moore College of Art and Design.