How Fresno’s County Pension Fund Is Helping Finance Its Recovery 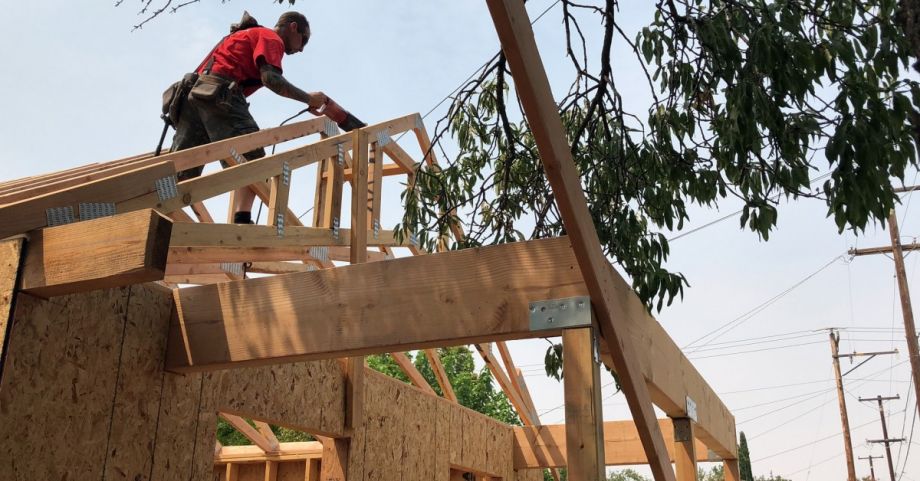 A backyard home under construction in Clovis, in Fresno County. Since 2018, the county employee pension fund has been helping finance first-time homeownership, affordable housing and small business lending within the county's borders.  (Photo by Nicolás Boullosa / CC BY 2.0)

If you live in Fresno County, California, and over the past year you got your first home mortgage, or a small business loan, or a loan to develop some new affordable apartments, there is a chance the local county employee pension fund financed it.

As the economy recovers from the COVID-19 pandemic recession, that chance is even greater, since the county pension fund recently allocated millions more dollars to local investments, in anticipation of greater need for capital locally during the recovery period.

“As we headed into COVID-19 market crisis, we recognized there was a need for more liquidity in the Fresno market,” says Nathan Magsig, a Fresno County Supervisor who is also currently serving as chair of the board of trustees for the county’s public pension fund, the Fresno County Employees’ Retirement Association, or FCERA.

It’s not so obvious when a pension fund finances a loan. It works deep behind the scenes, through and with local banks, credit unions, community development lenders and housing finance agencies. After borrowers take out a loan in Fresno County, the lender has the option to sell qualifying loans to the pension fund by contacting the Access Capital Community Investment team at RBC Global Asset Management. The pension fund pays the lender the borrowed amount plus a share of the interest, and as borrowers repay the loan, those funds get funneled through the lender into the pension fund’s coffers. Lenders call it selling a loan on the “secondary market.”

Lots of state and local government pension funds across the country buy loans on the secondary market. Across the country, according to Federal Reserve data, state and local government pension funds hold $4 trillion in investments, including $1.3 trillion in purchased loans, of which $167 billion are purchased mortgages to homeowners or affordable housing developers.

But those transactions are typically conducted on a national scope, with pensions everywhere buying loans from lenders anywhere, as long as the loans follow certain standards and procedures.

At RBC Global Asset Management, the Access Capital Community Investment team has made a specialty out of taking a slice of public investment dollars and investing them back into first-time homeownership, affordable housing and small businesses within the same geographic borders of whatever state or local government body is the client.

In addition to the impact on the ground, those investments showed a cumulative eight percent annual rate of return, beating the pension fund board’s expectations and giving the board the confidence in early May 2020 to approve moving an additional $7.5 million into the management of the Access Capital Community Investment team.

“I can remember looking in March when the stock market was falling pretty drastically, that the local investments actually buoyed our portfolio,” Magsig says. “It might have been the only [investment] we had that was positive at that time. So that was pretty ironic. The expectation was that it would perform, but what happened was it ended up being a top performer while also providing benefits to disadvantaged communities.”

The genesis of the Access Capital Community Investment team goes back to 1971. That’s when Ronald Homer interviewed for his first job at a bank. During his job interview, Homer mentioned to the president of the bank that he was interested in lending to communities that were predominantly African-American. “Reflecting the time and social conditions, the president admitted that his bank did very little in this area, implying that it just didn’t make good business sense,” Homer once wrote.

He got the job, making him that bank’s first Black loan officer. He would later rise to executive vice president and chief operating officer of Freedom National Bank of N.Y., the Black-owned bank founded in Harlem by Jackie Robinson (which federal regulators shut down tragically and controversially in 1990).

In 1997, Homer founded Access Capital as an independent firm. His initial clients were banks seeking required credit for serving low-income communities under the Community Reinvestment Act of 1977. Under that law, newly adopted regulations in 1996 meant banks could get credit for making investments in funds like Access Capital, which would go out and support lending to areas that banks couldn’t or wouldn’t reach by themselves.

Access Capital’s first significant non-bank investor was a health insurance provider in 2001, and its first public sector client came on board in 2004. Public sector clients like pension funds or other state and local government bodies have become the lion’s share of Access Capital’s clients — currently, banks represent less than 35 percent of the fund’s investor dollars. The firm became part of RBC Global Asset Management in 2008.

When the Access Capital Community Investments team gets a new client, a few things can happen to start finding local loans to purchase. In Fresno, early on in the partnership the pension fund hosted a networking breakfast with Homer’s team, introducing them to local banks and other players. Homer’s team also contacted the nearest Small Business Administration field office, to find out who are some of the most active small business lenders in the area. The team also looks at public data on home mortgage lending, released under the Home Mortgage Disclosure Act, to find the most active mortgage lenders in the market.

“We do a lot of internal research to find out who the big players are and we contact them and say here’s our money to invest and here’s what our parameters are and let’s see if there’s a way for us to do something together,” Homer says.

Homer says it can be especially helpful for affordable housing developers, lenders and housing finance agencies to have the certainty of knowing that there is at least one investor on standby to finance construction or preservation of affordable housing. Same goes for municipal bonds, which may be issued by school districts or utilities as well as local governments. The fact that the investor happens to be the local county pension fund is a bonus.

The county began seeing the effects of those investments faster than expected — impressing even Magsig, who spent ten years working at a nonprofit affordable housing developer in Fresno County before being elected to the county board of supervisors.

“Within the first five or six months we could already see they were in 11 of 15 cities making loans and just having an immediate impact on our county,” Magsig says. “As soon as the board pushed money to this thing they were out working, they didn’t sit there for a year before anything happened.”

Pension fund boards are typically very concerned about risk. The pension fund’s investments have to be able to pay current and future pension obligations. FCERA has about 20,000 members, of which around 7,600 are retired and receiving pension payments.

It works out well for local lenders, too. Community banks and credit unions typically keep a close eye on their overall loan portfolios, hoping to keep a certain mix between home mortgage lending, affordable housing loans and small business loans. With the local pension fund on standby to purchase any of the above, they can worry less about the mix and worry more about just meeting the credit needs of the community, knowing that the pension fund can purchase qualifying loans from them as needed to maintain their desired mix.

With the $7.5 million in new pension fund dollars now under his team’s management, Homer is anticipating that local lenders will be looking to make and sell a wave of small business loans to help re-start the economy after the COVID-19 pandemic.

“I think there will be demand in a lot of different areas but we’ll be focusing a lot on small business,” Homer says. “We think small business lending will be an important part of rejuvenation, though we do think there’s going to have to be some government support for them, too.”