How Detroiters Are Shaping a Post-Industrial Riverfront Park – Next City

How Detroiters Are Shaping a Post-Industrial Riverfront Park 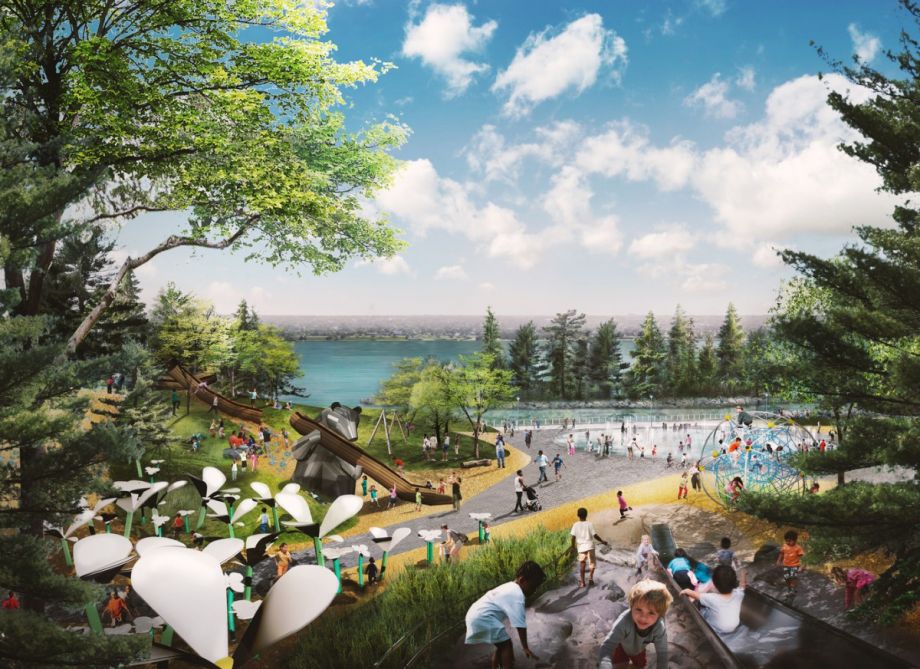 A current rendering of the redesigned west riverfront in Detroit. (Credit: Michael Van Valkenburgh and Associates)

Sure, sometimes, the 22-acre space comes alive for the occasional outdoor concert, but for the most part, Detroit’s West Riverfront Park is pretty desolate compared to the city’s RiverWalk, just a few miles east and home to lush wetlands vegetation, family-friendly playgrounds and volleyball courts and spacious walkways that welcome three million visitors a year of all races and incomes.

To help re-envision West Riverfront Park, the Detroit Riverfront Conservancy sent a community advisory team made up of Detroit residents on a tour of other cities to see firsthand the sorts of amenities a world-class waterside park can offer.

The community advisory team visited cities such as Chicago, New York and Philadelphia, where they had the opportunity to take notes on what works elsewhere and how that might apply for West Riverfront Park, the final stretch of the 5.5-mile Detroit riverside that the conservancy is looking to redesign.

“One of the coolest places we saw in Philadelphia was this park that had been built as an almost popup park,” says Khalil Ligon, one of the community advisory team members and also a planner who works for the Alliance for the Great Lakes. “There were lots of concessions and cool places to eat … We have the space for it, the entire riverfront is not developed so we have room to explore some of those things.”

Observations from the community advisory team informed an international design competition that asked firms to come up with plans to redesign West Riverfront Park, a project that is expected to cost $50 million, to be raised through donations.

A team led by Michael Van Valkenburgh and Associates beat out three other teams that had been selected as finalists in a months-long process.

Van Valkenburgh is considered one of the most significant landscape architects in the United States. He’s created designs for the Brooklyn Bridge Park, Maggie Daley Park in Chicago, a redesign of Pennsylvania Avenue near the White House and is working on the landscaping for the Barack Obama Presidential Center in Chicago. Working alongside his New York-based firm will be architect David Adjaye, the designer of the Smithsonian National Museum of African American History and Culture in Washington, D.C.

Among the conceptual plans proposed by Van Valkenburgh’s team was the creation of a cove with a beach, where visitors can wade in the water (or ice skate during winter months), a whimsical playground featuring sculptures in the shapes of Michigan animals and plants, an area for outdoor concerts, a sport house and other pavilions.

Van Valkenburgh says that he would eventually like to see the creation of an indoor swimming pool, where children can learn to swim for free. “Then, West Riverfront Park becomes a place where you had a defining experience,” he says.

Van Valkenburgh and his team visited Detroit at least 10 times since the competition process began last year, checking out neighborhoods near and far from the park site. They also met with the community advisory team, from whom he learned how many of Detroit’s elder residents describe their love of Belle Isle, the island park situated on the Detroit River that had historically been considered the city’s jewel.

“We’ve got to think of ways that people just have to come here,” he says. “I know Belle Isle was that in Detroit, and to some extent, that still is.”

Whatever will take shape at West Riverfront Park is the culmination of work to reimagine the city’s riverfront that dates back to the early 2000s, when the conservancy was established.

The current riverfront development spans more than three miles, from around the Joe Louis Arena downtown to just east of the MacArthur Bridge, which connects mainland Detroit with Belle Isle. Once the West Riverfront section is complete it will be one of the longest redesigned riverfronts in the United States.

One theme that has existed since the first sections began to be transformed: how to make the riverfront a place where everyone is welcome. Prior to any revitalization, much of the Detroit riverside was considered a wasteland of abandoned warehouses and neglected roads. In the process of re-envisioning that space, the Detroit Riverfront Conservancy has taken steps to ensure resident involvement, such as creating the community advisory team for the West Riverfront Park redesign.

Residents like Ligon were nominated for spots on the team, and in her case, she used her point of view as both an urban planner and a Detroiter to inform her input. She also hopes the revitalized park’s design implements details that pay homage to Southwest Detroit, where the park is located and where most of the city’s Latino population resides.

“This was definitely a much better experience in terms of really capturing the dynamic nuances that you’re hearing from the public,” says Ligon. “There’s often a lot of meetings for the public to give their feedback for redevelopment projects. Unfortunately, it doesn’t necessarily translate into the buildout … Here, I have been able to see that input translate into the conceptual design.”