How Community Development Lenders Work Around the Legacy of Redlining 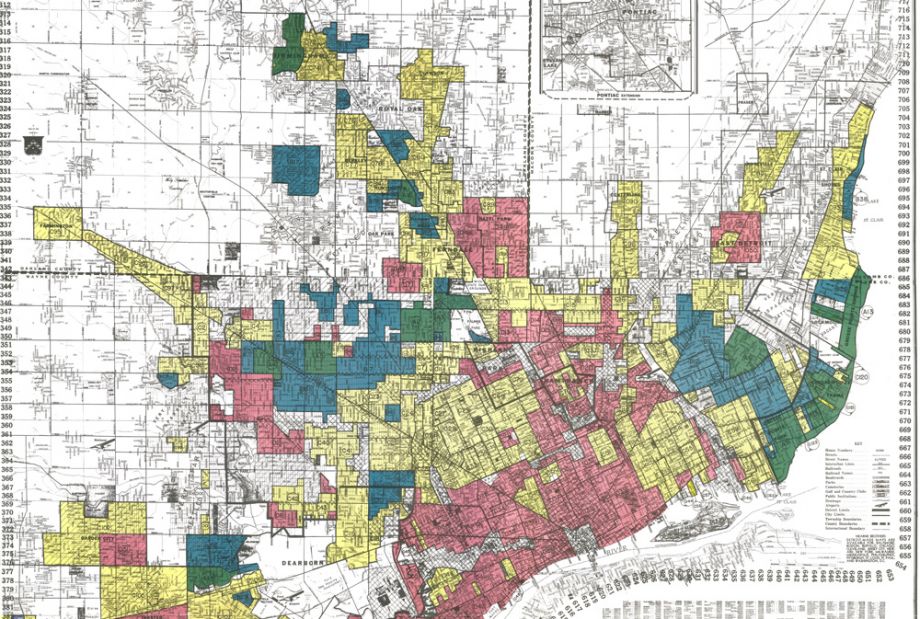 In Highland Park, a small hamlet surrounded entirely by the city of Detroit, 2014 was not the best time to be thinking about expanding primary care and behavioral health services. Detroit had recently declared bankruptcy, and the broader economy was still climbing out of the aftermath of the Great Recession. But when your organization focuses on serving LGBTQ youth of color, you never really stop thinking about expanding such services.

Such was life for Jerry Peterson, executive director of the Ruth Ellis Center, which provides temporary shelter, safe spaces, physical and mental healthcare and other services to about 500 LGBTQ youth (ages 18-25) a year in the Detroit area. The center was fortunate to have space to expand in a century-old former theater it already owned, but the theater needed major renovations to make it a functioning health and wellness center. The center planned for a three-year capital campaign to pay for renovations, but needed a loan to get the work started as soon as possible. Time is of the essence especially when serving this population segment — the life expectancy of a trans woman of color in the U.S. is just 35.

Peterson went to two banks, each with a prior relationship to the nonprofit through earlier loans or grantmaking. But each bank only offered to loan a fraction of what the Ruth Ellis Center needed. Banks make loans for real estate based on how much they think they could get for selling the property if the borrower defaults. The Ruth Ellis Center’s property appraised for only $275,000, and worse yet, because of broader market conditions Peterson says each bank only offered to loan half the appraised value.

Anyone working on revitalizing residential properties in disinvested neighborhoods across the country will recognize this situation as the “appraisal gap.” Appraisers helped create the gap back in the 1930s, when the federal government hired squads of them in just about every city to grade the riskiness of making home loans in certain neighborhoods. The riskiest neighborhoods were outlined or shaded over red, giving rise to the term redlining. It was largely based on race instead of reality, but it became a self-fulfilling designation. Denied capital for ownership and upkeep, redlined neighborhoods gradually fell into disrepair. It was no coincidence many of these neighborhoods were and still are predominantly black. Because appraisers and banks continue to discount these neighborhoods, homeowners and landlords can’t get the capital they need to rehab or maintain their properties.

But it turns out some lenders don’t have to rely on appraisals to make loans for real estate projects like these. Without relying on an appraisal, one lender provided $856,000 in capital to finally start renovations in 2016, and the new Ruth Ellis Health & Wellness Center opened its doors in 2017. The center just took out another loan from the same lender to finance another expansion to a building across the street, expected to open its doors in October of this year.

The lender, IFF, is a nonprofit itself, and it lends only to other nonprofits. It was built to leave appraisals out of the equation, giving it the ability to help community-based organizations like Ruth Ellis Center expand to meet needs right where they are in historically redlined places like Highland Park. IFF has been lending this way since it was founded in 1988. It’s not the only nonprofit lender that works this way, but the way these kinds of nonprofit lenders work to break historical patterns of disinvestment still isn’t widely understood, even by their borrowers.

“This model was new to me, and kind of scary at the time,” Peterson says. “When I look back at it I have no idea how the hell they decided to loan us that money.”

To get around the appraisal gap, IFF and the few other nonprofit lenders like it have built up an intimate understanding of the neighborhoods where their borrowers work, their borrowers’ sources of income, and their borrowers’ financial management capabilities.

Back in 1995, this lending model was new to Joe Neri, IFF’s current CEO. He was working at the time for The Resurrection Project, which provides housing, healthcare, education and other services for predominantly Latinx immigrant communities, centered on the Pilsen neighborhood on the west side of Chicago. The Resurrection Project wanted to build its first childcare center, and Neri was similarly frustrated by early discussions with banks before turning to IFF and its non-appraisal based lending model.

“There have been new sectors added along the way and they all have their own bells and whistles, but from the standpoint of non-appraisal based lending, nothing has really changed in the organization’s 31 years,” says Neri, who came to work for IFF in 1997, not long after finishing the childcare center project.

If the appraisal gap is bad for residential properties, it’s even worse for nonprofits. On top of properties being undervalued simply because of location, nonprofits typically need to build or renovate facilities that don’t get bought and sold very often, which makes them hard to appraise.

“An appraiser will say, ‘well, I can’t find any childcare centers that were bought and sold in this neighborhood so I don’t have any comparables,’” Neri says.

Throw in the fact that nonprofits typically have complicated funding streams, often combining public and private sources that don’t feel familiar or reliable to most loan officers at most banks, and that’s three strikes against building a nonprofit facility in a formerly redlined neighborhood.

Getting around the appraisal gap for nonprofits can have important knock-on effects to help close the gap for homeowners and apartment building owners. These community-based organizations are often building the things that appraisers would see as adding value to the neighborhood — childcare centers, health clinics, recreational spaces, schools (charter schools didn’t exist in 1988, but today they are a major sector for IFF).

Still, Neri notes, this work can’t close the appraisal gap entirely. He points out one recent study that found, even when controlling for other factors, homes are still undervalued because they are in a predominantly black neighborhood.

“We all have to really absorb that fact and understand structural racism just flows into so many things,” Neri says. “Appraisals is clearly one of those areas.”

Neri readily admits IFF wasn’t explicitly built with overcoming the history of redlining in mind. It was built to make loans to nonprofits working in historically disinvested neighborhoods. There simply was no other way to do that successfully unless it left appraisals out of the equation. From its home in Chicago, today it works in nine states across the Midwest. IFF’s current loan portfolio is around $341 million, up from $244 million in 2015, with an average loan size of around $650,000. It’s made loans as large as $5 million, and as low as $3,200.

Every sector IFF works with is a little bit different.

“In childcare, we are starting with fundamentally making sure there is very strong demand in the surrounding neighborhood,” Neri says. “In essence, a childcare center is selling seats, and to the extent they are focused on serving low-income kids or they have a HEAD-start program, we’re making sure there is strong demand, so that those seats aren’t open for very long, because if they do their revenue is going to be lower than what they’re projecting.”

Some childcare income may come from fees, but if you’re serving low-income communities it’s not going to cover everything. The rest can come from a bewildering variety of local, state and federal sources, as well as donations or grants. IFF analyzes the nonprofit’s track record of raising money from all these sources, typically looking back at the past five years, with at least three consecutive years of audited financials — which can be a barrier to newer nonprofits.

“We don’t make loans to startup nonprofits,” Neri says. “We’re looking at their financial management over time as part of the predictor of whether they can keep that going.”

Even those who can meet that threshold may need a little help, like adding a board member with financial management experience, perhaps an accountant or retired banker from the neighborhood.

Knowing the region intimately is essential too. Many things like property prices, construction costs, understanding neighborhood demand, can look very different from city to city or neighborhood to neighborhood. But there are certain things about cities in the region that are familiar state-to-state.

“Detroit may have the largest challenges magnitude-wise, but those are the same challenges on the south side or west side of Chicago, the northwest side of Milwaukee, the west side of Indianapolis, the north side of St. Louis,” Neri says. “There’s tremendous applicability in terms of how we approach the sectors across the region.”

IFF has no desire to expand beyond the Midwest, but others like Nonprofit Finance Fund work nationwide using a similar model based on a deep understanding of nonprofit income sources and market conditions in historically redlined neighborhoods.

In addition to determining a nonprofit’s reliability to make loan payments, IFF needs to verify what a project will actually cost, which it does using its long experience in financing these kinds of projects.

“If an agency comes to us and says we got bid from a contractor, they say it’s going to cost $500,000 to rehab this building … we’re checking that bid out because we want to make sure that the agency’s not getting ripped off,” Neri says. “Sometimes we’re looking at whether they obviously over-paying for a building in terms of acquiring it.”

Because of the nature of these projects, IFF is often making loans for nonprofits to acquire properties as well as construction or renovation. If the nonprofit is going to invest in the property, it shouldn’t have to do so with the potential of the owner selling the building later.

“You’d be surprised the number of agencies that are leasing and when they come to us and when we run the numbers they’d be paying less to own,” Neri says. “When you’re leasing, that landlord is paying property taxes and clearly they’re passing that cost along to you in their lease.”

With its newly renovated building, the Ruth Ellis Center was able to attract a new healthcare system partner who is now paying them $2,500 a month in rent — the same monthly amount as their loan repayments to IFF.