How Cities Plan to Save the Census – Next City

How Cities Plan to Save the Census 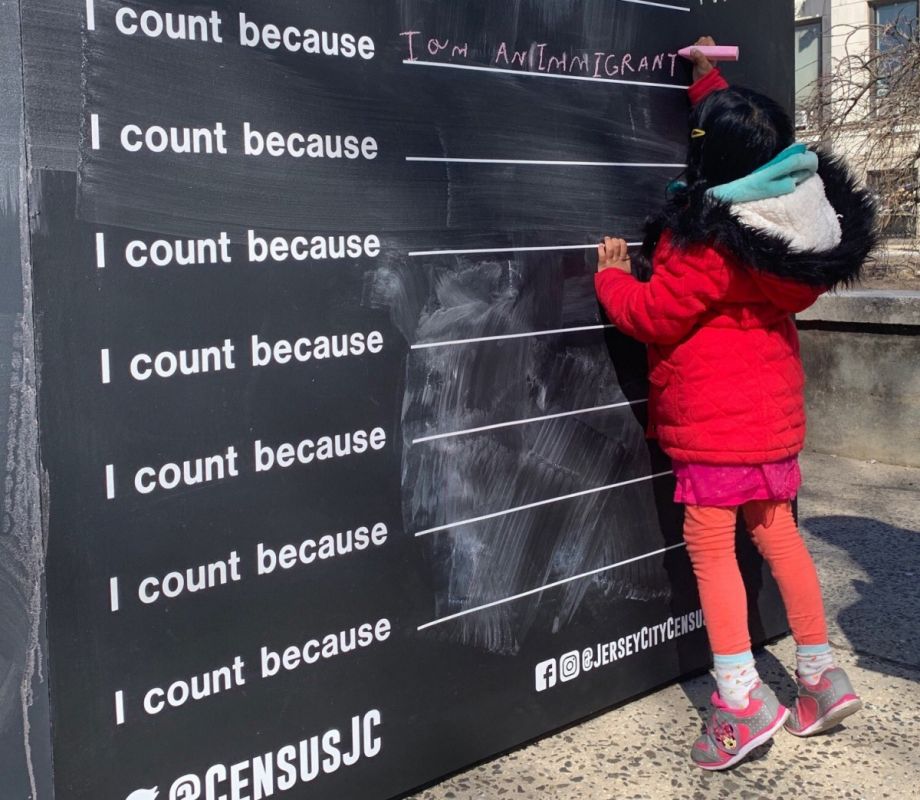 Jersey City's census kickoff included a large “I count because…” chalkboard in front of City Hall. Around the country, cities are gearing up for a year of preparation to ensure that the 2020 census counts all their residents. (Photo courtesy Jersey City)

The 2020 census is shaping up to be a mess of historic proportions. “It’s like a perfect storm of challenges,” says Kiki Jamieson, president of the Fund for New Jersey, which is working to get a complete count in that state.

In addition to the potential addition of a citizenship question by the Trump administration — the legality of which the Supreme Court took up this week and which critics say will depress responses from immigrants and other vulnerable groups by more than 6 million people — it is the first digital census. That means the Census Bureau hopes the 35 percent of Americans without a reliable home Internet connection — themselves in typically hard-to-count areas — will take it upon themselves to find a library or other hotspot in order to log on and be counted. And the 2020 census has had little new federal money to work with, relative to past efforts, leading to cuts in human footpower, marketing, and testing of new systems.

So cities, planners, nonprofits, and libraries are stepping into the breach to explain the importance of the census to their communities and to provide secure sites for filling it out. They are working through mostly voluntary Complete Count Committees and old-fashioned organizing, hosting meetings with local nonprofits and linking up with county governments. “It’s about demystifying and setting the expectation that everybody should be counted,” says Jamieson.

At stake is $800-900 billion in federal funding for programs largely determined by decennial census counts, ranging from Head Start and Medicaid to highway planning and adoption assistance. In addition, congressional district boundaries and representation numbers are based on the numbers of residents counted each census, and many states stand to lose or gain Congressional representatives once the numbers are in.

New Jersey receives $22 billion of census-based federal funding. Yet its main cities, including Newark, Jersey City and Paterson, have census tracts categorized as “hard-to-count” based on their 2010 responses. Paterson mayor Andre Sayegh was elected in 2018 in part because of his commitment to getting a full count of Paterson residents, fewer than 50 percent of whom mailed in their 2010 census forms.

“People are afraid to be counted for many reasons,” says Inge Spungen, head of the nonprofit Paterson Alliance, ”from immigration issues to just not trusting the government with any data.” So the Alliance and the city are working with “trusted leaders” in schools and places of worship. The mayor held a kick-off event in early April at a school gym, chanting “who counts” alongside posters made by fifth graders. In Jersey City, marketing efforts around the census launched this month, with digital kiosks popping up around the city and a large “I Count Because” chalkboard installed in front of City Hall.

Young children under 5 were the most undercounted group in the 2010 census, in part because children and families with young children are disproportionately poorer. Children in poverty are also disproportionately hurt by an undercount, as they draw on publicly funded health and food services. Nonprofits such as Advocates for Children of New Jersey, are working with child care referral agencies, pre-K providers, and principals to make sure these children are counted. “The kind of on the ground work to ensure a fair and accurate count — a lot of municipalities have not done that before,” says Peter Chen, policy counsel for ACNJ, which is taking a lead on the state’s complete count efforts. “But once people learn why it’s important, they are quick to jump on board.”

In Albuquerque, New Mexico, county and city census coordinators joined together to pool two dozen existing staff who know how to reach people on, for instance, Pajarito Mesa, an unincorporated area with no roads that is home to thousands. “Last time we had a 1.9 percent undercount,” says Bernadette Miera, special projects coordinator for Bernalillo County. “Some of the nonprofits are saying the undercount could be as much as 5-6 percent, which is extremely scary, because it affects Medicaid, Medicare, afterschool, senior programs.”

“My main concern is lack of resources, lack of education for the public,” says Myrna Leal, a city planner and census lead for Brownsville, Texas. Thirty different organizations representing schools, nonprofits, health services, local government, and faith centers meet regularly to explain how answering the census impacts everyday life — and that “no matter what happens this is a safe form.”

All of these efforts are new to this census.

Yet the digital nature of this Census also raises concerns about hacking, interference, or aggregation of data that would contain identifiers. A year out from the census launch, the lack of federal and state planning for secure, reliable, accessible online census may yet depress numbers. “There are big swaths of the country without broadband access, and those tend to coincide with areas that are low income,” says New Jersey’s Jamieson.

Libraries, pre-existing trusted civic resources, with free and secure wifi, will be crucial to a full census count.

Grace Riario is assistant director of the Ramapo Catskill Library System, which covers 47 libraries in upstate New York. The library is training staff members to help people with the census and locating private, secure computer access points to combat the fear around the census. “We are here to educate folks about the consequences of not participating,” she says, “but fear is an emotion” driving many responses.

Needless to say, cities and libraries are doing this with little to no extra funding. New Jersey has pledged $2 million and advocates have asked for $9 million more. New York State has earmarked $20 million; advocates say doubling that might be enough. Brownsville is working with $15,000. “We all have to devote resources that we don’t have,” says Jamieson.

In the end, the last best hope of an accurate Census may lie in the coalitions that have been built as part of the Complete Count Committees formed by cities and states. Brownsville’s Leal says all the coordination with community groups has been a huge benefit to her department. “We are out there and getting to talk to people who may not ever come into your office. It’s sparked a lot of collaborative efforts.”

“Even before the census was weaponized, we saw this was an important place to build voice and power within immigrant communities,” says Elizabeth Plum, vice president of policy for New York Immigration Coalition. “With the census, it’s been challenge and complication at every corner, so using that challenge to organize and have conversations about privacy and digital footprint” is the silver lining.

Carly Berwick writes about education and culture for Next City, as well as The New York Times, ARTnews, and other publications.