How Chelsea, Mass., Is Tackling Coronavirus – Next City

How Chelsea, Mass., Is Tackling Coronavirus 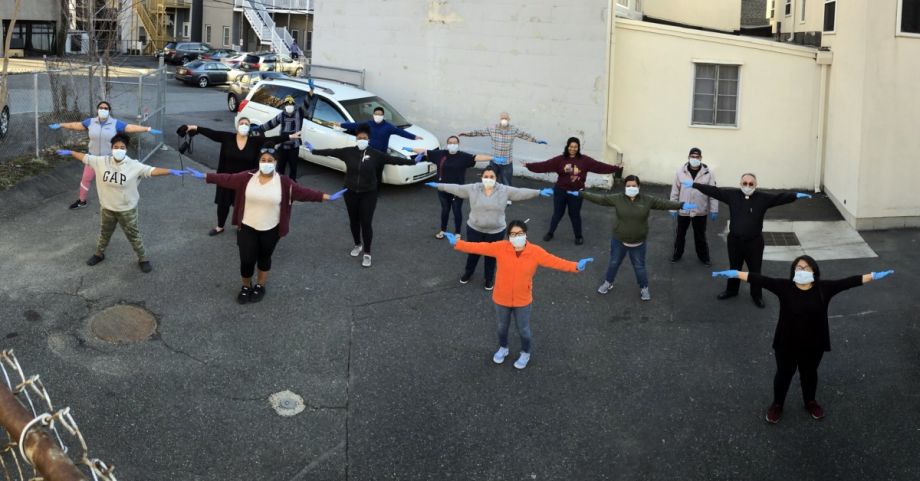 “It’s 4:02 PM. I’m Mimi Graney,” begins the downtown coordinator for Chelsea, Massachusetts, on a recent call of the city’s pandemic response team. “We’re building an army with allies, resources, strategies, and robust systems, and we are doing our part to step in to aid those who are in need.”

Such an army is needed in Chelsea because the city is a COVID-19 hotspot, reporting an infection rate of 1,890 cases per 100,000 people, three times the rate of Boston, and on par with infection rates in New York City’s Bronx and Staten Island.

A predominantly immigrant city, two-thirds Latinx, Chelsea faces a perfect storm of front-line workers, long-standing health and economic disparities, crowded living conditions and legacy environmental pollution. Yet its swift and comprehensive response to the virus — from its task forces co-led by community leaders, to block captains who keep tabs on the well-being of neighbors, to a volunteer rapid-response team that delivers food, diapers and other essentials to residents in need — rivals other cities. Community organizers’ long-standing efforts to aid vulnerable residents, and the city’s climate resiliency planning position this tight-knit community to respond well to the pandemic, but state and federal resources are still urgently needed.

“Chelsea is really … off the charts,” in Massachusetts, said Maria Belen Power, associate executive director of GreenRoots, an environmental justice organization based in Chelsea that initiated daily coordination calls among community leaders. The approach was so successful that the city institutionalized them, through a simple conference line open to all residents. “The response has been amazing from the city of Chelsea, from the partners and local organizations and local leaders — but this is beyond our capacity,” said Power.

Located north of Boston across the Tobin Bridge, Chelsea houses more than 40,000 people in 1.8 square miles, only a third of which is zoned for residential housing. Residents live alongside industrial facilities, such as terminals that store heating fuel and Logan International Airport’s jet fuel, and they suffer from high levels of air pollution.

It’s not uncommon for multiple families to share the same apartment, with up to 16 people living in one two-bedroom apartment, according to Dinanyili Paulino, chief operating officer of Chelsea Collaborative, a community service group run entirely by Latinx women. “There’s a lot of sub-leasing in Chelsea and landlords who take advantage of low-income workers,” she added.

Nearly half of Chelsea residents were born outside of the U.S. Many work in the hospitality industry, and were “the first ones who were laid off” when the pandemic began, said Paulino. Some are undocumented, and unable to collect unemployment. Still others work in food services, or other jobs considered essential, and are continuing to work.

“In Chelsea, we’re really seeing the social determinants of health, we’re seeing the inequities that have existed for a long time and how disease disproportionately affects vulnerable populations,” said Dean Xerras, medical director, Massachusetts General Hospital (MGH) Chelsea, and long-time member of the city’s Board of Health.

MGH Chelsea quickly converted its health center, which usually receives about 140,000 routine and urgent care visits per year, into one the state’s first respiratory illness clinics, according to Xerras. That means any resident with symptoms or concerns about exposure to the virus can walk in, without a referral or prescription, and be evaluated by a physician, get an X-ray and a COVID-19 test. City leaders pushed to make testing available to all residents because of Chelsea’s hotspot status. Results come back within 24 hours, according to Xerras.

Still, it can be hard to convince some immigrants to seek care, and that contributes to the virus’ rapid spread. “For the undocumented folks, there’s a feeling that I can’t go, because I don’t have papers. Even people who have papers are feeling very much threatened by the anti-immigrant sentiment coming from our [federal] government,” said John Walkey, of GreenRoots.

Community leaders launched their efforts on March 11, before they knew the full extent of infection spread in the community.

“It started with us saying this is going to be bad, what do we do?” said Power.

Once the city took over the daily calls, planners implemented a system that grew out of its climate resilience planning and civic engagement, said Alex Train, assistant director of planning and development at the city. City officials are preparing a response to potential coastal flooding from rising seas and severe storms because of the city’s location and vulnerable population. Such planning helped it pivot quickly to a pandemic response, establishing task forces for critical areas, including housing and quarantine, food assistance, mental health, schools, elder care, communications and financial impact. One city staffer and one neighborhood leader co-lead each task force, “so there’s widespread civic participation and decision-making capacity that’s representative of the community,” said Train.

Task forces are synchronized with a project management tool and they check in on daily calls. City Manager Tom Abrosio participates every day, giving “residents … an opportunity to speak directly with our chief elected officials,” said Train.

The city disseminates information using a neighborhood block captain model, relying on one captain in the neighborhood who’s a trusted community leader, who also monitors which neighbors are in need. The city’s immigrant residents, “simply don’t trust the government. We’ve strived to create effective ways to communicate with them,” said Train.

Chelsea also partnered with the United Way to launch One Chelsea Fund, which as of last week had raised $125,000 from 676 individuals. Each Chelsea resident is receiving $250, regardless of their immigration status, from the fund.

Such assistance doesn’t begin to meet the city’s full needs, and on April 10, dozens of city and hospital leaders sent a letter to Governor Baker, urging further assistance.

Community leaders relate heartbreaking story after story of residents who’ve lost housing once they’ve tested positive for the virus. Paulino, for example, tells how Santos (last name withheld for privacy) a 57-year old undocumented immigrant, was kicked out of his apartment and left to sit on a porch in the rain for five hours while the Chelsea Collaborative scrambled to find him housing. “He was in such a bad condition that we had to call 911, and he’s now on a respirator,” she said.

Just last week, however, the city secured its first hotel, a 140-room former Quality Inn in neighboring Revere, that will serve as a place where residents, like Santos, can safely quarantine.

“We’re really, really thrilled about that,” said Xerras. Both MGH and the city’s other health clinic, BIDMC will oversee medical care. While the need may surpass what the hotel can offer, Xerras said the city is exploring additional options.

Even before the pandemic, Chelsea had “a huge amount of food insecurity,” said Ron Fishman, community coordinator for Healthy Chelsea, and lead for the Chelsea Hunger Network. Sixty percent of residents reported running out of food by the month’s end at least once in the past year, he said.

Fishman is co-leading the city’s food distribution taskforce. The need is so massive that the state last week dispatched the National Guard to provide logistical support.

The City Council appropriated $300,000 for food and supplies, and accepts donations from various wholesalers, individuals, and the Greater Boston Food Bank. At its current rate of spending $15,000 per week, Train said the city has funding for two more months, but, he added, “Honestly, what we’re seeing on the ground is the number of households in need is exponentially increasing.”

The city set up an emergency response system, mobilizing volunteers to deliver food seven days a week. Its 311 service takes calls for food assistance. Requests are relayed to food captains who ascertain the level of need, and contact a volunteer who collects and delivers the food from a centralized repository set up in the city’s Port Park.

Chelsea’s two largest pantries, St. Luke’s and the Salvation Army are “being extended beyond imagination to meet the demand,” said Fishman, who recently set up a “child food pantry,” to expand the city’s capacity. Ordinarily, the process for registering as a food pantry in the food bank’s system takes time. By linking the new so-called child food pantry to an existing “parent food pantry” in the city, he was able to quickly create a whole new pantry.

Groups like the Chelsea Collaborative are also running their own pop-up pantries, and helping others with emergency food distribution. The group pitched in recently when the staff at St. Luke’s Church were forced to self-quarantine, said Fishman. “They didn’t lose a beat. They gave out 405 boxes on Saturday [at the Church] and when they ran out, [they] took the names of 23 families, went shopping, and dropped off the food.”

Chelsea is “extremely dense and … that creates hardship,” said Fishman. But our organizations, our agencies, the city, the churches, everybody else, we play extremely well together.”

Follow Meg .(JavaScript must be enabled to view this email address)