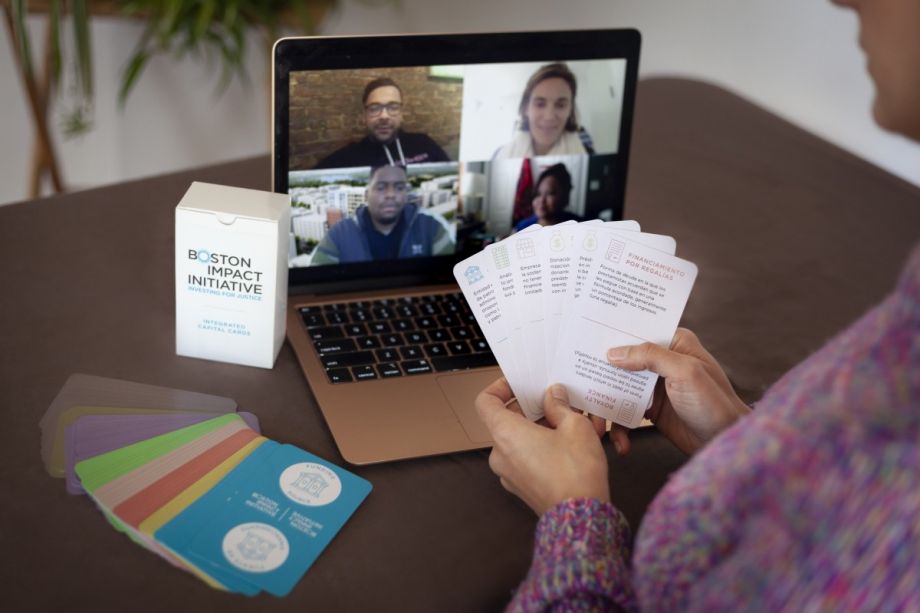 How do you create conditions to allow healthy and resilient communities to flourish? That’s the question that first catapulted Deborah Frieze, co-founder and president of Boston Impact Initiative (BII), into action.

Prior to founding BII, she’d worked at the Berkana Institute, studying complex adaptive systems and systems change. She’d noted inequality in the American economic system — a system she realized was “generating inequality by design” — and the particular race-based nature of how inequality manifested. When it came to battling that inequality, Frieze’s hometown felt like a critical place to start.

Boston is one of the most unequal cities in the country when measured by income. When measured by wealth — homeownership, control over assets, and other tools that allow people to rise above economic hardship — that disparity becomes startlingly clear. A 2015 study showed that in the greater Boston area, the median net worth of a white household (meaning the value of all household assets minus liabilities) was far above the national median, at about $247,500; the median net worth of a Black household was $8.

A common solution suggested to redress this inequality is a focus on economic development through access to jobs — creating or increasing income. But in order to actually break the cycle of economic hardship, families need access to wealth; not just a focus on careers or education, but improving long-term economic outcomes. And the way Boston Impact Initiative addresses that is through impact investment.

Most small business entrepreneurs require “some degree of bootstrapping,” Frieze says. In the start-up phase, they rely heavily on personal savings as well as family and community support and sales. But in communities with extremely diminished assets such as Boston’s predominantly Black neighborhoods, that financial support is less readily available. And that, in turn, means that many entrepreneurs of color are impeded before they even begin.

Banks, which require credit scores and personal guarantees for most loan agreements, make those agreements inaccessible to many people coming from a background of economic hardship. CDFIs may not provide capital to businesses that don’t fit their traditional target markets for financing. Often, the only recourse left to these small business owners are predatory online lending programs, payday lending, and other forms of high-interest-rate, deeply extractive lending.

And that’s where BII steps in.

Frieze explains that instead of evaluating applicants through the lens of traditional loan-eligibility requirements such as credit scores or collateral, BII forges a relationship with the potential borrower to determine eligibility, a process commonly called character-based lending.

“If you go back to the olden days, when community banks and community bankers knew their neighborhood, an entrepreneur would walk into the office and the banker would know them, know their character, recognize them from the community and make a loan,” she says. “Now, everything is so anonymous that we don’t know our community — so character-based lending means I’m in a relationship with this entrepreneur, I build trust, we have a line of communication, I understand their business, they understand that I’m not here to make [money] off of them… it’s what I would call an economics of relationship.”

It’s that economics of relationship that BII is working to prioritize, instead of an extractive lending economy motivated by financial return. The relationship-centric approach requires more time and effort to maintain those community-based relationships; it also means turning some rules of conventional investment upside down.

“In traditional investing, you would not want to invest in the supplier/customer of your portfolio company — people would worry about conflicts of interest,” Frieze says. “[Instead] we’re looking for a ‘confluence of interest’… the more connected and interdependent our portfolio is, the stronger the ties between them, the healthier and more resilient they will be.”

By prioritizing these interdependent systems, BII encourages place-based community building and integrated capital in what it calls “closed-loop investing:” the more interdependent each business in their portfolio is, the closer BII is to the whole enterprise, and the closer each business is to the others. That’s in direct opposition to traditional finance, which silos businesses off from one another to prevent conflicts of interest and thus discourages connection.

“Finance is like a machine — it is looking for the metric of financial risk and return,” Frieze adds. “Really they’re looking to say, ‘how much money will I make on this and how much risk is there of losing it?’ And that is just a different calculus than [asking], ‘Who are these entrepreneurs? Who are they in relationship with? How can their customer base make them stronger and more successful?’”

Right now, BII is expanding that work through a fund-building training program that connects 30 cohort members in 11 different places across the country, each working in different ways to close the racial wealth gap by providing capital to their local communities. Like BII, cohort members are focusing on integrated, or blended, capital funds reliant on grassroots relationships. The program originally launched in April 2020, not long after the COVID-19 pandemic forced stay-at-home orders across the country. It was scheduled to continue until October 2021, but in the wake of what has evolved into an ongoing economic catastrophe, it quickly became clear that this work was not only needed, but needed urgently.

“In June, we started our first funding round… but this is also when a lot of the riots were happening, and the COVID effect had really devastated a lot of small businesses,” explains Olivia Watkins, BII cohort member and president of the Black Farmer Fund. “For a lot of our applicants, their needs in terms of financing had drastically increased.”

That meant the Black Farmer Fund, along with multiple other cohort members, was scrambling to meet a rising level of demand. Rather than stick to the program, Boston Impact Initiative adapted a new curriculum based off of members’ needs and feedback.

Watkins, who is currently getting her MBA with a concentration in finance, says the simultaneous experience of studying conventional business frameworks as well as BII’s coursework on community-based impact investing has been invaluable. “What’s really great about the BII experience is that we’re learning alongside other people who are doing similar things,” she adds. “What I’ve found most helpful in my MBA program is the [case studies], and at BII it’s like we’re in one big case simulation with 11 other communities across the country. We’re learning from them, exchanging resources and knowledge.”

As the year, and the pandemic, wore on, and tumultuous events unfolded, members found it difficult sometimes to be fully present and engaged during the cohort meetings. But the circumstances also lent a deeper critical urgency to the work Frieze, Watkins and the others were doing. While cohort members in the Twin Cities responded to the George Floyd protests, Watkins and her team in New York organized resources for Black farmers in the aftermath of those protests.

“I would say there’s a range of barriers that are different for each group,” says Frieze. “You’re trying to deal with a [finance] industry that has broken trust with a population, and so if you’re going to come at them with another financial opportunity, it has to come from [the community].” That’s why in BII’s fund-building cohort, most — if not all — of the members have already established relationships with the communities their funds aim to serve.

One cohort member puts it this way: members don’t simply write checks to people who were previously denied access to capital. As place-based fund managers, they wear many hats. One role is protector, to keep their communities from financial harm; another is connector, to build funds based on relationships; still another is community leader, to provide increased access and meet local needs.

“[In] the craziness that this pandemic has been, we’re learning what the tools are as we go,” says Watkins. With that in mind, what better moment to rebuild communities — and build them better, healthier, and more connected than before?