How I Helped to Change Commuting Culture at Lyft – Next City

How I Helped to Change Commuting Culture at Lyft 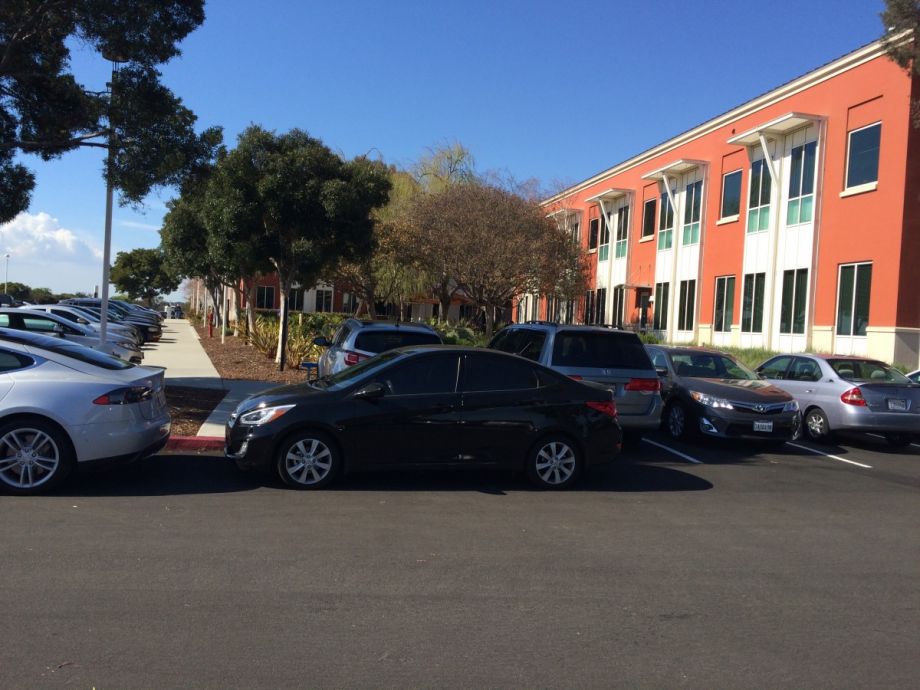 The parking lot for Facebook's headquarters looks much like Lyft's used to: crowded and chaotic. (Photo by Evan Goldin)

Despite higher gas prices, climate change fears and new technology, the vast majority of Americans are still opting to drive alone to work instead of using public transit or carpooling. Why? Primarily, it’s the massive availability of free parking on both sides of the commute (thanks, suburbs). It’s an expectation at most office complexes that you’ll be able to park at your office for free, and that makes it very difficult for any other mode of transit to compete with driving alone.

Yet, it turns out that a small nudge can make a big difference. And the stronger the nudge, the more people you can get out of their cars.

I used to work at Lyft headquarters in San Francisco. Being a ride-sharing service, we always felt strongly that our team members should explore other modes of transportation before driving their personal vehicles alone. However, each office we occupied (we grew quickly) included on-site parking spots. And, as you can imagine, when there’s free parking, people will use it — even when they work for a hip ride-sharing app.

When we moved our corporate office to San Francisco’s Mission District in 2014, the problem really exploded. Despite being a short walk to BART, our new office now had 53 parking spots — up from a half dozen — and the new neighborhood had free all-day street parking available (rare in S.F.). Soon, almost half our employees drove to work.

Those who arrived after the lot had filled up would circle the neighborhood looking for street parking. This created lost productivity for the company, crowded the streets in our neighborhood and frustrated employees on a daily basis. And because the parking was free, even employees who had other options drove to work, taking spots from those who didn’t, and they might pass up open spots on the street because they had superior parking available next to the office.

We tried the logical first step: devoting a small number of spots to carpools.

While it successfully created more carpooling, the low supply created the same problem the open parking spots did — unpredictability. It only took a couple of attempts for a driver to wrangle a carpool together and then fail to find an open carpool spot to give up on carpooling altogether.

Abuse of the carpool spots was also rampant, which, short of monitoring the carpools closely, wasn’t easy to solve. We pondered making all spots carpool-only, but we expected the abuse would increase and would produce little success, and it would punish people who didn’t live near other employees.

Instead, we pushed forward a simple, radical new approach: Charge employees to park by leasing each spot to a specific employee on a monthly basis. Taking a page straight from Donald Shoup, America’s parking guru, we felt this approach would solve a myriad of problems in one fell swoop.

First, it would create predictability in the parking lot. The same 53 people, every day, would have guaranteed parking, and everyone else would know they need to find other options.

Second, we wanted employees managing family schedules and living farther away to have the option of guaranteed parking. It didn’t feel right to just start throwing [throw] up “EXECUTIVE PARKING ONLY” signs. This created a way for everyone to have the option of parking, but only if they valued it enough to pay for it.

Most importantly, we redirected 100 percent of the money collected from the parking program to subsidize monthly transportation costs to those who didn’t lease a spot. That new money — $75/month per employee for about 250 employees at the time — buffered the program against internal criticism from those that “lost out” on parking.

We rolled out the program in late 2014, but it wasn’t an instant success. At first, we priced parking too high, at $200/month. Not all spots were sold and we ended up with a slew of empty spots in the lot and upset employees, who were annoyed at not being allowed to use empty spots. At the same time, some employees accused us of being “classist” and making the parking lot only accessible to the wealthy.

But we stuck to our guns, lowered prices on the parking spots until demand and supply matched and the lot was full ($150/month was the magic number at first) and addressed criticisms head on and face-to-face, repeatedly explaining the benefits.

And boy, did it work. The percentage of employees driving to work fell by double digits, and many more employees starting using Lyft to get to and from work. Obviously, that was one of our goals, but at another company, the parking fund could easily be expanded to subsidize public transit passes, bike supplies or other means of alternate transit.

Those that did get spots finally had predictability in their commute. This improved employee retention and made life much easier for parkers, especially the parents who were driving to work so they could drop off and/or pick up their child at school. Many of the drivers even started giving Lyft rides on their way to/from work (using the app’s destination filter), which often covered the costs of the parking spot.

One Lyft employee, Ryan Hupfer, decorated his parking spot and used trivia to lend it to other employees when he didn't need it. (Photo by Ryan Hupfer)

Thanks to the complicated U.S. tax code, we were even able to charge employees for parking pre-tax, straight out of their paycheck, minimizing the hit to their bank account. Parking remained so popular that to keep the lot full — and the waiting list short — we raised prices consistently, eventually hitting $275/month. With 53 spots rented out, that collected $14,575 each month that was redistributed to non-parkers in the form of Lyft credits. We estimated that the monthly post-tax cost to employees with parking spots was only around $8,750/month, yet the entire $14,575 could be given to non-parkers to spend on tax-free transit passes (or taxable compensation, like Lyft credits).

Leasing spots also had an interesting side effect: It created a secondary market for parking. Through an internal Facebook group, parking spot holders could offer their spot to others when they were out of the office for a day. Sometimes those offering spots asked for a cup of coffee in return, others asked for money and a few just asked for a correct trivia answer, or nothing at all.

Or, someone who really needed a spot for a day (say they had a midday appointment or post-work plans that required a car) could request one and offer money, if that did the trick. It was a great method to make sure that the lot was always full and costs were minimized, even when spot holders were out of the office. And it kept those who only really needed to drive once or twice a week from driving every day, purely out of habit.

Eventually, the HR team was given a few spots as well that they could dole out daily to those who needed to drive their car in for a mid-day sales trip, had valuables in the car or for some other reason. That cut way down on desperate pleas in the Facebook group.

Charging for reserved parking won’t work for everyone, but I strongly encourage more companies to try it. I’ve talked to dozens of companies who have complained they don’t know how to change their employees’ habits, while their parking lot hosts hundreds — or thousands — of cars, all parked for free. Even $40/month for the most desired spots in the lot could be enough to ignite a massive shift change, especially at a company where most people drive to work.

Evan Goldin is a transportation advocate and was the first product manager (and parking lot manager) at Lyft. He is now Director of Product at Chariot, an on-demand shuttle system.