How Brazil Absorbed a Million Visitors Without Enough Hotel Rooms 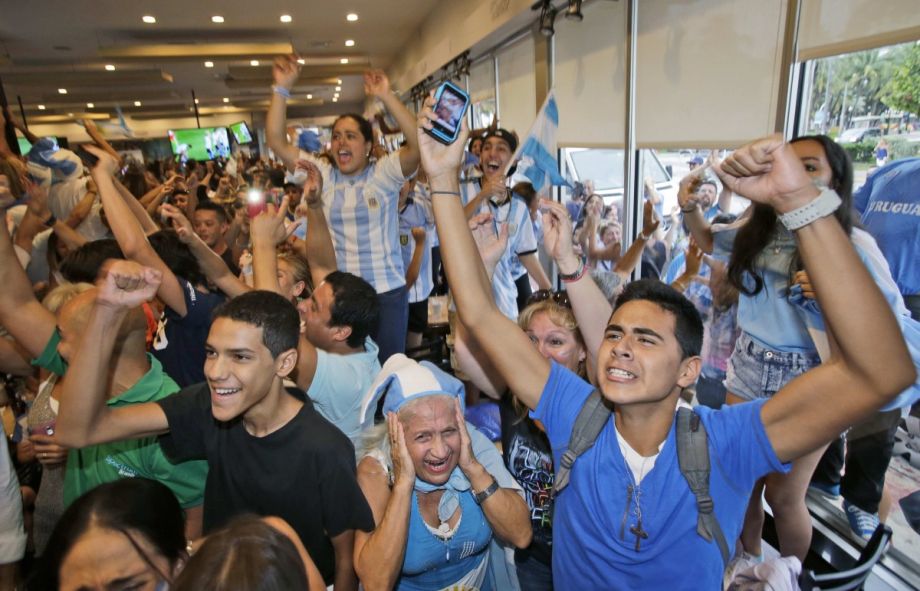 Brazil received up to a million foreign visitors during the World Cup, plus many more Brazilians who traveled within the country. Photo credit: AP / Wilfredo Lee

As soon as Argentina scored its game-winning penalty kick in the semi-final shootout on Wednesday night, fans began revving their engines for the road trip to Rio, a 35-hour drive. According to local press, the city expects to receive upwards of 100,000 Argentines ahead of Sunday’s World Cup final versus Germany. The municipal government has already opened two public squares to camping and RVs – an Argentine campout on Copacabana Beach at the beginning of the tournament didn’t go over too well with Cariocas, who consider that stretch of sand their front yard – but the invasion of los hermanos, as Brazilians affectionately call their neighbors to the south, will require a healthy dose of jeitinho to accommodate everyone.

Jeitinho is a slang term that means a little workaround, and Brazilians, for good or for ill, are famous for them. Improvised solutions, shortcuts past red tape, inside connections and ways of bending the rules are alternatively lauded in the local culture as a mark of creative ingenuity or derided as precisely the attitude that holds the country back. With only 30 percent of the infrastructure projects planned for the World Cup actually completed according to the latest surveys, it has taken a healthy dose of jeitinho to get people to and from stadiums, such as shuttle buses in lieu of public transit lines that were never built.

But the real jeito needed has been how to house the 600,000 to one million foreign visitors (final numbers have not yet been released) who have spent days if not weeks in Brazil for the last month. Not to mention the 1.3 million tickets sold to Brazilians themselves, many of whom traveled throughout the country for the games.

In the run-up to the tournament, much ado was made about too few hotel rooms. The National Economic and Social Development Bank (BNDES in Portuguese) released a R$2 billion ($900 million USD) credit line in 2010 that brought 4,727 hotel rooms online, and FIFA ultimately approved 743 hotels across the 12 host cities as meeting their minimum standards. But in the end, it was the high prices, especially in terms of cost-benefit, that made a traditional hotel less than appealing to many visitors. While both Rio and Fortaleza had average occupancy rates of 90 percent during the Cup, according to Enrico Fermi, president of the Brazilian Hotel Industry Association (ABIH), rates were as low as 55 percent in Manaus and Brasilia – two of the white-elephant stadium host cities – and averaged 72 percent across all 12.

“The big draw for investors is growth in the internal market,” Fermi said. “35 million Brazilians have become tourism consumers in the last 20 years with an estimated 50 million more in the next 12 years.” The World Cup only lasts a month, a short-term event that would not make something as permanent as a new hotel a viable business over the long haul if that internal demand weren’t already there.

For a city like Cuiabá, the smallest of the dozen hosts and well off the beaten path, growing domestic tourism was not going to drive a hotel boom. As a result, the numbers didn’t add up, especially given their fortune of drawing a group stage game with South American teams, which brought fans in droves. “There are 16,000 beds in a 20-kilometer radius, our hotel capacity can’t hold all the Chileans and Colombians,” said Marcus Fabrícius Nunes de Santos, secretary of tourism for Cuiabá, “We received 35,000 Chilean and Australian tourists [when the two teams played each other].” (Despite a disappointing performance by the Socceroos, fans from down under were the third biggest purchaser of tickets after Brazil and the U.S.)

Cuiabá’s solution was to try alternative lodging, from bed and breakfasts to short-term apartment rentals like Airbnb. “It was a very successful partnership, we went to the Ministry of Tourism and they were in favor of it,” Nunes de Santos said, citing the 1,000 beds rented out on the accommodation website. His response differs from some American cities, where city councils are trying to legislate short-term room and apartment rentals out of existence. “In Brazil, federal and state governments were highly receptive. In fact, we had governments reach out to us for help in some cities,” wrote Maria Parra Rodriguez, Airbnb’s Head of Communications for Latin America. At its peak on Saturday, July 5, there were 15,000 people in Brazil sleeping soundly with reservations made on the website. (Full disclosure: I stayed in Airbnb lodging during the World Cup, paid for out of pocket).

This cooperative attitude does not sit well with the Brazilian hotel industry. “Our position is completely against this government policy of fermenting illegal activity that doesn’t collect taxes or contribute to hospitality sector productivity,” said Fermi. “We contribute to the tax burden, the highest in the world. Hotel industry associations worldwide are fighting against this informality.”

When asked how Cuiabá should have handled the numbers cited above by Nunes de Santos, Fermi responded, “You use the surrounding area, like Goiânia [a larger city 600 miles from Cuiabá], and then charter shuttle flights, just like in any other country. During the [2006] World Cup in Germany, people stayed in Portugal and took round-trip flights on game days.”

For Nunes de Santos, this extravagant proposal missed the point. “If people can afford it, sure,” he said with a skeptical tone given the relative economic situation of South American fans. Argentina, for example, is going through a debt crisis with U.S. hedge funds on the eve of its World Cup title bid and fans in Rio have been making do on extremely title budgets, with the local press reporting on visitors eating at the equivalent of soup kitchens that are subsidized by the city and charge 50 cents for a meal.

In Cuiabá, thankfully, the cost of living is quite a bit lower than in Rio, where locals have taken to renaming the real currency the surreal. Nunes de Santos pointed out the economic benefits of keeping the gringo guests in town – a 40 percent increase in revenues at the local shopping malls and a 55 percent increase for local restaurants. For Brazilian cities during the World Cup, the jeitinho economy definitely paid off.