How All Residents — Not Just Citizens — Have a Voice in Planning 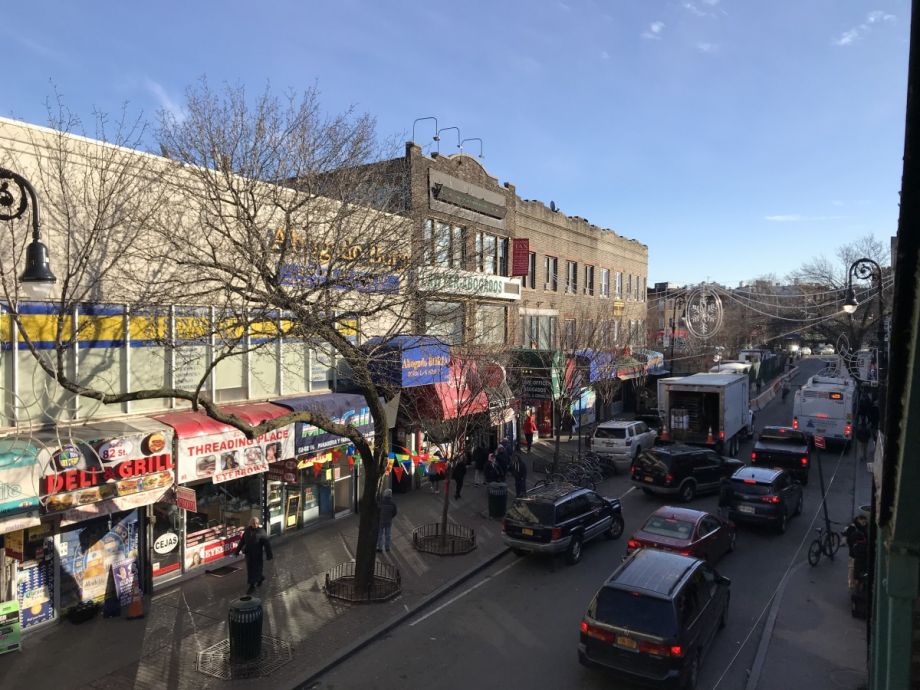 Around the 82nd Street elevated subway stop along Roosevelt Avenue, in the Jackson Heights section of Queens, New York, zoning has kept businesses mostly small and local. These bustling blocks are lined with locally owned bars and restaurants, bakeries, jewelry shops, discount clothing stores, two sneaker stores, a women’s shoe store, a religious items shop, two busy produce markets right across the street from each other, and a small grocery store. It’s the kind of New York neighborhood that gets romanticized as a place where anyone from anywhere around the world can come and make a home for themselves and their family.

Tania Mattos has been organizing for a few years now to keep it that way. She’s one of the founding members of Queens Neighborhoods United, an all-volunteer, unincorporated working group of Jackson Heights, Corona and Elmhurst residents and small-business owners that first came together in 2014. Many members are undocumented, but have lived in the neighborhood since childhood.

Today the group is fighting against a developer who plans to bring a Target store into a site in the neighborhood that the zoning code designates for local businesses. But beyond zoning or local versus big business, this is also a story about what it looks like to participate in community development and democracy, in an era where citizenship status can exclude people who are by other measures lawful, productive members of society. Many of Queens Neighborhood United’s members can’t vote, but they can still make their voices heard.

“For communities like ours that are either recently arrived or they have no idea perhaps how the system works in the United States, it’s important for us to inform people that even if you’re not a U.S. citizen, voting is not the only way you can participate in the community,” Mattos says.

Queens Neighborhood United is arguing that the zoning at the development site doesn’t allow for a Target, which in their view wouldn’t bring anything new into the neighborhood except for increased traffic in an area already bursting at the seams with people, street vendors, and beloved local businesses. There’s also another Target just a few subway stops away. The NYC zoning code also has a separate designation for big businesses that applies to other sites, including a few nearby.

The developer, Sun Equity Partners and the Heskel Group, says the zoning is appropriate as most of the proposed Target store square footage is underground. Early after purchasing the site, Heskel Group CEO Yeheskel Elias told the Jackson Heights Post that his company was “trying to do something for the underserved” by bringing in a “retailer that caters to the cost of living in the area and meets the needs of the local residents.”

Residents haven’t agreed so far. The battle up to this point has included filing zoning challenges with the Department of Buildings, drafting affidavits from residents and local businesses to submit as evidence in court, and testifying in front of an obscure public agency known as the Board of Standards and Appeals. None of these things requires proof of citizenship.

Queens Neighborhoods United met the Target developer and the Department of Buildings in New York State Supreme Court this past January to force construction at the site to stop while their zoning challenge continues to play out.

It wasn’t easy. “First of all, these court hearings happen in the middle of the day, which is not very accessible to too many people [who] work full time jobs,” says Mattos, who took a day off of work for the court date in January.

During the hearing itself, the judge grilled lawyers representing both sides, using the technical language of lawyers and judges and also urban planning jargon. Queens Neighborhoods United brought simultaneous translation technology with them to the courtroom — not that it was totally effective given the technical language and rapid back-and-forth between the lawyers and judge.

“She was definitely very firm and short and she challenged both sides,” Mattos says. “I think leaving the courthouse, people felt like these courthouses and these administrative bodies are not made for communities like ours.”

“These are tools that wealthy people have always had at their disposal,” Segal says. “And they pay their attorneys with money, hourly … It’s a small field of folks who do cases like this.”

Although the organization asks for donations, Queens Neighborhoods United doesn’t seek funding from foundations or public dollars on principle to maintain its independence. But that also means it can’t afford to pay Segal as a wealthy group would.

Instead, the funding for Segal’s work comes from a combination of settlement dollars from banks paid to the New York State Attorney General, some local city council funding, something called “interest on lawyers accounts” — interest earned on dollars held in trust by lawyers on behalf of clients, pooled from across the state — and also the Neighborhoods First Fund, a NYC-focused collaborative created in 2015 that pools and distributes grant funding from banks and foundations.

Building a case like this takes thousands of hours, Segal says, working with community organizers to prepare affidavits, gathering evidence to build a legal argument, responding to questions from the judge. Consistency is everything, even in moments of defeat — the judge that day in January did not rule in Queens Neighborhoods United’s favor to pause construction at the Target development site.

But that was just a minor setback for the group. “All of that was about proving that we care enough,” Segal says. “It would have been really satisfying to … make them stop building, but if we want this case to actually matter, we had to go through all of that.”

It didn’t matter that they lost at that hearing or later at the next court level up, Segal explains. It mattered that they tried. The suit puts the idea that the development might violate zoning codes into the record, which would matter if Queens Neighborhood United wins its zoning challenge. Other developers not given such “prior notice” have successfully argued that they should be permitted to proceed with projects, even after losing zoning cases.

Losing is part of the game, but it’s not easy explaining that to residents and small business owners who aren’t in the real estate industry — or to funders who understandably demand measurable results.

“You lose a lot, but you have to play to win,” Segal says. “But it’s fine, because you put friction in the system, you give people power over what’s happening in their neighborhoods and hopefully you eventually win.”

The next big date is in late May, when the Board of Standards and Appeals will hold a second hearing on the zoning matter. And Queens Neighborhoods United is busy finding potential witnesses to make their case, recruiting them from among the shop owners, employees, and residents for whom English is very likely not their first language. They have made a home of where they are in Jackson Heights nonetheless, and they’re willing to spend their spare time and days off from work to defend it.

The site in contention was the Jackson Heights Cinema, which closed in 2013. The current developer demolished it in 2016. It was a big part of what made the neighborhood feel like home for such a remarkably diverse set of neighbors.

“I remember ‘Selena’ premiered there and the line was down the block because there were not a lot of movie theaters in New York showing it,” Mattos says. “And also there were Bollywood movies that had subtitles in Spanish. It was so representative of our community.”