How a “Vitality Fellow” Captured the Imagination of a City 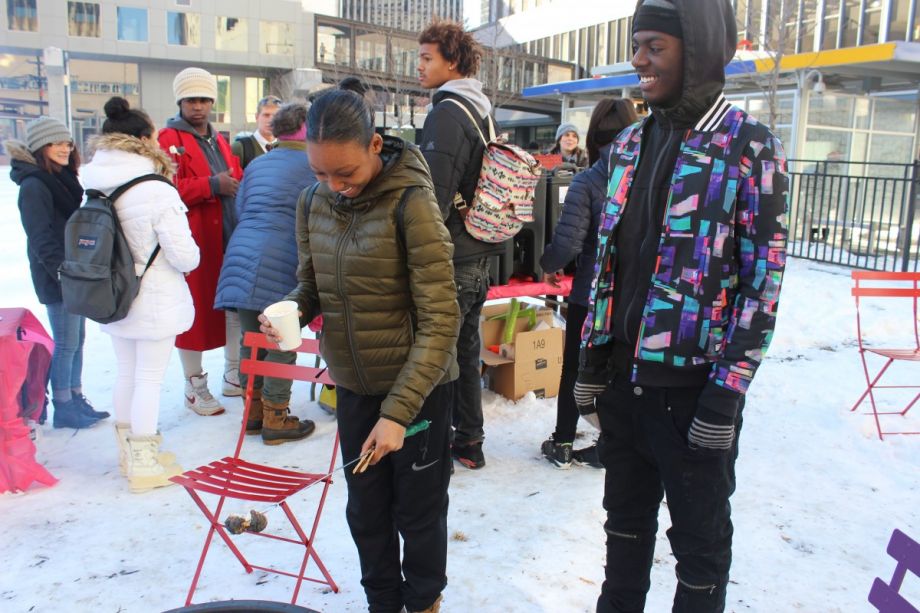 It’s a brilliantly blue winter day, and a happy crowd in downtown St. Paul dispels the myth that Minnesotans hibernate from November to May.

Smiles erupt as people sip hot chocolate, build a snowman, cluster in threes and fours for animated conversation, gobble food-truck burritos at café tables and toss wood batons in the hopes of knocking over wood blocks in a game of kubb, a Scandinavian pastime that looks like a cross between bocce ball and supersized dominos.

A young woman hands out orange buttons that declare “I’m Making Saint Paul Better.” That’s the answer to a question asked by almost everyone passing by: “What’s going on here?” Most visitors stop at a table covered with large sheets of paper to record their ideas about what they’d like to see more of downtown: “green space,” “great buildings,” “public art,” “music,” “playgrounds.”

One of the organizers of this event, Margaret Jones, who tends a sidewalk fire pit, is delighted with the results of this pop-up festival. “Oh my god!” she exclaims, introducing a young man to everyone within earshot. “This is John, who has a culinary arts degree and is visiting from Florida on a business trip, and he’s never had s’mores before.”

It’s Jones’s mission to foster events, programs and innovations that foster social connection among everyone in the city. In 18 months as St. Paul’s vitality fellow — the first-of-its-kind position in city government anywhere — she uncorked a stream of placemaking initiatives. She was directly involved in more than a dozen major community-building projects, from the police department’s successful campaign to curb pedestrian deaths to the restoration of a wetland in a lower-income neighborhood with new affordable housing nearby.

Jones also infused the community — from city hall to grassroots neighborhood groups — with a well-defined vision that age, race, economic status or level of physical ability should make no difference in people’s quality of life when it comes to issues like traffic, safety, crime, economic opportunity and great gathering places in your neighborhood. She launched a speakers’ series that attracted 1,200 participants from 105 local organizations and enlisted an advisory team charged with disassembling silos inside City Hall.

St. Paul Mayor Chris Coleman declares, “Margaret really gets the creative juices flowing around the city, stimulating a vision where people can see in their minds what we can create together.”

The 8 80 Vitality idea captured St. Paul’s imagination in May 2014 when hundreds of local residents turned out to hear Gil Penalosa — former parks commissioner of Bogota, Colombia, and a globetrotting consultant on urban livability — at 17 different appearances across the Twin Cities during a placemaking residency, organized by the Saint Paul Riverfront Corporation.

It’s not crazy to think that St. Paul could be seen as one of the world’s truly great cities, declared Penalosa. “Thirty years ago no one would have ranked Melbourne, Australia, as one of the top 400 cities in the world. Even the local newspaper described its downtown as an ‘empty, useless city center.’ Now many of us think it’s one of the top four or five cities.”

This was the genesis of the 8 80 Vitality Fund, a $42.5 million investment over three years, focusing on infrastructure and public space improvements to enrich the lives city residents. Among projects being jumpstarted are the River Balcony to open up more public space overlooking the Mississippi, the citywide Grand Round pedestrian and bike parkway and a string of new community spaces in lower-income neighborhoods along the route of the Green Line light rail.

“We wanted to make sure the 8 80 idea continued in the day-to-day workings of the city after there was no longer money in the fund,” explains St. Paul’s Economic Development Program Coordinator Nora Riemenschneider about the fellowship, which was funded by the Knight Foundation after being selected from a pool of more than 7,000 applications as a winner of the Knight Cities Challenge.

Jones was tapped for the job on the basis of her experience as Executive Director of the Lexington-Hamline Community Council, serving a mixed-income, racially diverse section of the city.

One of the first things Jones did inside City Hall was organize an 8 80 advisory team, drawing representatives from 12 of the city’s 14 departments, ranging from safety and inspections to the library. This group was instrumental in drafting St. Paul’s “Working Principles for Vibrant Places and Spaces”, which the mayor sent out to all city employees.

Planning and Economic Director Jonathan Sage-Martinson concurs. “It’s a good, healthy, equitable thing to make cities that work for all people. But it’s also an economically smart thing to do — it attracts investment, residents and businesses to help facilitate economic growth.”

Although the 8 80 Vitality Fellowship ended this February, its impact endures in policies and decisions. “The fellowship allowed us to take the 8 80 ethos into every project in every neighborhood,” notes Sage-Martinson.

Looking back on everything she undertook in 18 jam-packed months, Jones says, “I feel like I’ve been the city cheerleader, concierge and an ambassador for St. Paul.”