How a Detroit Landmark Built a Space for Creative, Minority-Owned Businesses – Next City

How a Detroit Landmark Built a Space for Creative, Minority-Owned Businesses 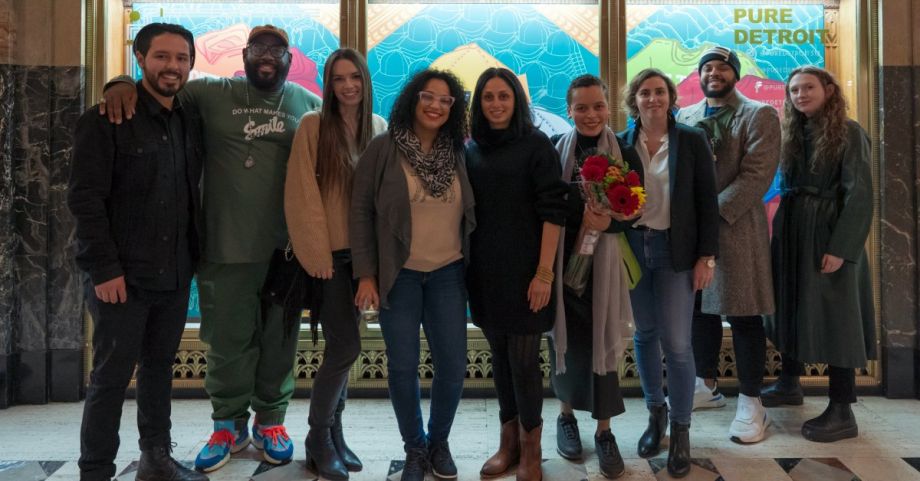 The fourth-floor artists and artisans at the Fisher Building. (Photo courtesy The Platform)

The Fisher Building is known as “Detroit’s largest art object.” The office skyscraper, which opened in 1928, boasts a grand lobby decked out with marble, mosaics, painted ceilings and ornate detailing in brass and bronze.

Real estate developer the Platform purchased the landmark in 2015, spending over $10 million in rehabilitation and renovation. But the company was stuck on what to do with the fourth floor, broken into small offices by design for doctors and dentists.

“I thought, these are the most beautiful studio spaces — the size of the windows, the light coming in and the ceiling height,” recalls Abir Ali, at the time the director of design and culture for The Platform. “The floor was nearly 70 percent unoccupied, nobody knows what to do with it, what better way to pay homage to the history of the building than to invite the creative community in?”

Ali’s intuition about the fourth floor became a three-year incubation program to provide subsidized studio and office space to Detroit’s creative community. What started as an experiment in 2017 has thoroughly transformed the iconic skyscraper.

“When you have such a beautiful building, it’s an asset in more ways than just financial,” Ali says. “It’s an asset that should be shared with the community that’s anchored there.”

Ali doesn’t have a traditional real estate background; she also has experience in architecture, design, furniture making and economic development. (She is no longer with the Platform.) When she became director of design and culture for the company, she knew how difficult it was for Detroit artists and designers to find well-maintained, well-managed and affordable studio space “with character and inspiration,” as she puts it.

Her suggestion for the fourth floor was to remove the walls of former doctor and dentist offices, making way for white box spaces to be adapted as studios and offices for upstart creative businesses. Alongside the renovation, she knew the Platform needed to design a straightforward, transparent lease offering that “could meet you where you are.”

“For a regular office tenant that comes to the Fisher Building, they get a 30-page lease document,” explains Brandon Hodges, senior development and affordable housing manager for the Platform. “It wasn’t the most appropriate way of attracting the creative community.”

The company developed one-year temporary use agreements, which Hodges calls “a scaled-down version of our traditional lease.” It reduced insurance requirements and maintenance charges, prohibitive costs for many creative tenants.

The key, however, was the three-year promise of subsidized rent. “When I set up an appointment to see spaces, it was just to satisfy my curiosity — I thought there was no way I could afford office space in the Fisher Building,” says Andrea Williams, founder of Paisley Paper Co. and Andrea Designs Studio. “When they told me about the program and subsidizing the rent, I realized I actually could afford this.”

Williams moved into a roughly 400-square-foot office space to grow her companies; she was then able to quit her job to run them full time. “It allowed me to take [the business] more seriously, giving me a home base to invite clients,” she says. When the Platform surveyed fourth floor tenants last year, they found 90 percent increased business exposure and client growth, with 85 percent reporting new revenue and 25 percent reporting the ability to hire new employees.

Tenant outreach happened informally: “It wasn’t a mass marketing attempt, it was an experiment they let trickle out organically,” says Joshua A. Smith. He runs the branding studio Who’s That? from a 300-square-foot office on the fourth floor after hearing about the program from Ali. His business growth includes providing branding services to the Platform.

Ivan Montoya was a recent graduate from the College of Creative Studies, located near the office. The painter initially split rent on a 400-square-foot studio space with other artists, then worked with the Platform to move into a larger space shared by more people. “There are six different creative practices going on there — a tattoo artist, a muralist, painters, freelance commercial illustration,” he notes.

The Platform’s fourth-floor tenants aren’t just diverse in professions. Between 2017 and 2019, fourth floor occupancy increased 79 percent with a mix that is 50 percent female, 50 percent people of color, and 40 percent under the age of 30. “The tenants span all demographics,” says Williams. “What’s so great about that is that it makes art feel accessible to everyone.”

Tenants also made the city landmark more accessible to outside visitors, hosting open-studio events and contributing to programming led by the Platform and art shows in the ornate lobby.

“When we bought the building in 2015, we had legacy retailers there for 30 years and now there’s a newer generation,” says Hodges. “We sometimes rely on the creative fourth floor to tie all that history together.” Programming that paired legacy retailers with fourth floor artists to create artwork to be displayed in the lobby, for example, “creates a better sense of community among all tenants.”

2020 marks the end of the three-year incubation program, with many tenants in the midst of economic uncertainty brought on by COVID-19. Originally the Platform planned to “graduate” tenants into market-rate leases or into other buildings owned by the company.

But the company doesn’t view this as a “finite program,” according to Hodges. “Everybody who wants to stay is definitely going to stay, we won’t be increasing rents or anything.” The Platform is now looking to activate the rest of the fourth floor, either leasing to a large creative tenant or providing more spaces as part of the subsidized rent program.

The flexibility the real estate company found within the program may be helpful as it navigates the uncertainty of office space in the pandemic. “Office spaces are going to evolve … we are so tied to these prescriptive lease agreements and I think there’s a lot to learn about flexibility going forward,” Hodges says.

“It’s a story of just going with an idea — forget the numbers, just go with an idea that feels so right,” as Ali puts it. “One alternative translation of what a space can be, and what it can mean to people — it’s about taking a little bit of a risk to make something work, rather than change what it is.”