How a Controversial Vacant Lot in Brooklyn United a Community 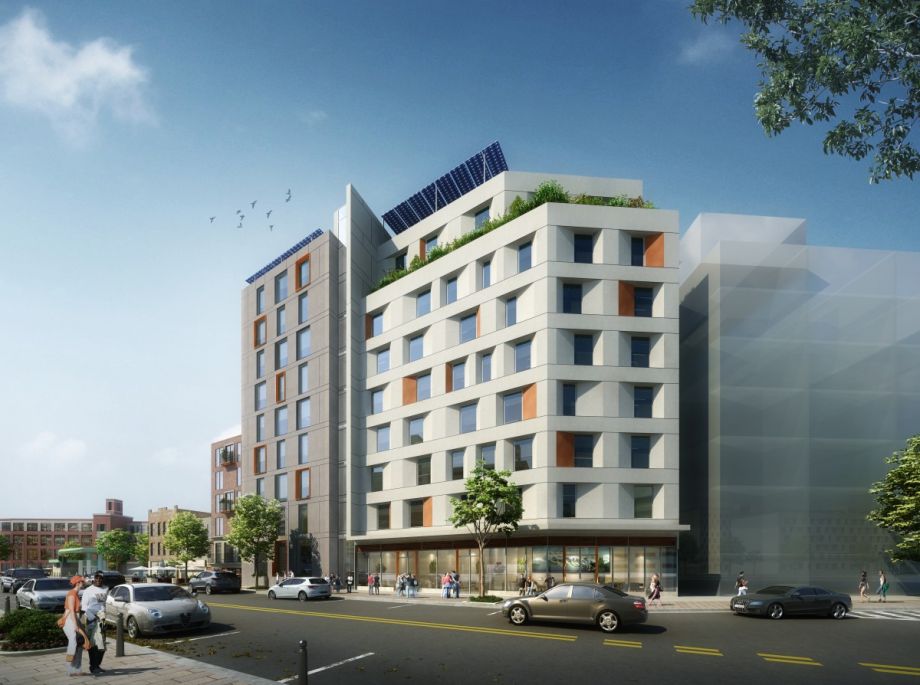 Part of the proposal to redevelop three parcels of the Broadway Triangle (Courtesy St. Nicks Alliance)

The Broadway Triangle is 31 acres of overgrown and trash-strewn lots wedged between the neighborhoods of Williamsburg, Bedford-Stuyvesant and Bushwick. This is the largest remaining city-owned site in North Brooklyn, an area utterly transformed by gentrification over the past decade.

Such a rundown stretch of land doesn’t suggest there’s much at stake with its future. But it’s become an undeniably powerful site for surrounding communities, which include African American residents of Bedford-Stuyvesant, Latinos in Bushwick and Orthodox Jews in South Williamsburg.

For years community groups have debated if developing the Broadway Triangle would further segregate the already-segregated communities, or if the site had potential to knit neighborhoods together. As of this March, the latter has proven true. Four local organizations representing the area’s diverse population — groups that haven’t always agreed over the Broadway Triangle’s future — were recently awarded rights to develop it collectively.

“It’s been 15 years learning about how difficult, but how important, community development is,” says Scott Short, chief executive of RiseBoro Community Partnership, one nonprofit within the joint venture team. (The other three organizations are United Jewish Organizations of Williamsburg and North Brooklyn, Los Sures and St. Nicks Alliance.) “I’ve learned how critical and important this site was to the community. To finally persevere and deliver for the community feels like a homecoming.”

Questions of what to do about the Broadway Triangle date to the mid 1980s, when industrial businesses were leaving the area. Local organizations, including St. Nicks and Los Sures, began working with the city to craft the 1989 Broadway Triangle Urban Renewal Plan to promote new residential development and industrial revitalization. But industry continued to disappear, and by 2008 the Pfizer Company, which had dominated the area, closed its last production facility.

A year after the Pfizer closure, then-Mayor Michael Bloomberg took his own stab at revitalization. A few years earlier the mayor had overseen the major rezoning of the North Brooklyn waterfront, which set new development and gentrification into motion. The longstanding black, Latino and Orthodox communities all surrounding the Broadway Triangle were feeling the pressure of change.

In response, a group of community organizations known as the Broadway Triangle Community Coalition, which included Los Sures, filed a lawsuit. The suit argued the deal violated fair housing laws by giving an unfair advantage to Orthodox residents, by providing a disproportionate number of multi-bedroom apartments they said would favor that community’s larger families, and by requiring low-rise buildings, perceived to cater to those who can’t take elevators on the Sabbath.

The resulting settlement agreement included a number of stipulations for any future development. One was that Bedford-Stuyvesant residents would be given preference in NYC’s affordable housing lottery for units at the site, as opposed to preference given only to residents of the mostly white and Latino neighborhoods of Williamsburg and Greenpoint.

Another required the city to pay $2.4 million for Fair Housing tenant services, needed to fight racially-motivated displacement of black and Latino residents in privately owned residences across North Brooklyn.

Finally, the settlement stipulated the city move forward on a new request to develop the site following New York City’s Extremely Low and Low-Income Affordability program. This limited the number of studios and required a minimum number of apartments with two or more bedrooms.

In the summer of 2018, the city released three separate RFPs for three Broadway Triangle lots to begin the development process anew. There was a realization among RiseBoro, United Jewish Organizations, Los Sures and St. Nicks Alliance: Despite disagreements over the Broadway Triangle, they had continued to work together, from tenant advocacy to affordable housing development and Meals on Wheels distribution. Los Sures and United Jewish Organizations had forged an early partnership in 1997 after developing a Williamsburg residence for both Orthodox and Latino residents.

Combining their efforts, they believed, could make a powerful case for collectively developing the site. “We were like-minded in that, if the nonprofit community is seen as competing with each other … a for-profit developer will more likely be selected” by the city, says Frank Lang, director of housing for St. Nicks.

The four nonprofits formed a joint venture team and began collaborating with the lawsuit framework as a guide. Juan Ramos, executive director of Los Sures, says this framework was crucial in coming to a consensus. “This was seen as an opportunity to redo something that was done wrong,” he says.

The team envisioned all three sites as a campus that “would feel like one community with a sense of connectedness,” says Lang. “Through this process we found our differences are relatively slight compared to similarities of what we wanted to do.”

Community spaces were particularly important. “The bigger vision is of this project as a bridge, to heal any prior divisions that once existed or bubbled up over the development of this land,” says Short.

Their proposal included landscaped courtyards a plaza and rooftop space. A shared, flexible community space will be used by the four organizations to offer services to building residents and the surrounding community. There will also be a nonprofit coffee shop that employs at-risk youth and a workforce development center operated by St. Nicks Alliance spanning 7,000 square feet.

The plans include 380 apartments, ranging from studios to four-bedrooms. And Rabbi David Niederman of the United Jewish Organizations says the requirements of a Kosher lifestyle (such a separate kitchen spaces) will only require minor modifications. “This is a community designed for everybody,” he says.

The city awarded all three sites to the partnership this March, and construction is expected to take place between 2020 and 2025. Ownership will eventually be transferred to JOE NYC, a Joint Ownership Entity for nonprofit owned affordable housing in New York City.﻿ ﻿The ownership structure ensures permanent affordability, the group says.

Each organization is preparing to begin development discussions with the city, but before that they collectively hosted a celebration for those involved with the project and longtime community activists. “It was wonderful and everybody came,” says Lang. “Often we focus on the work and don’t get a chance to take a breath and feel good about where we’re at. We wanted to make sure that we did that.”