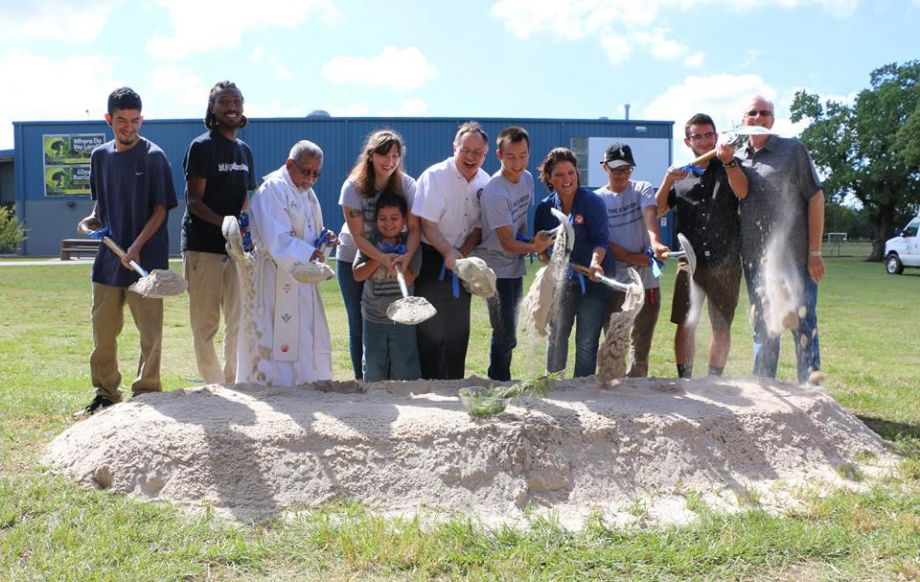 Earlier this month, ground broke in Houston on a project everyone involved saw as a long shot just a few years ago: a million-dollar skatepark for the Gulfton neighborhood.

The project kicked off about three years ago, when a group of local youth approached their councilmember about getting a skatepark in their community. Councilman Mike Laster referred them to Neighborhood Centers, a nonprofit that helps residents apply and strengthen their inherent civic power.

Justin Wiederman, 16 at the time, was thrilled to start working with Neighborhood Centers, but he also thought it might be too good to be true. Laster appreciated their enthusiasm, but says he expected their efforts to result in a minimal space, a concrete pad with a few features somewhere. Neighborhood Centers staff recognized the commitment and motivation of the youth, but also the enormity of the ask. They weren’t designing some concrete pad.

“This is a million-dollar skatepark at a time when the Houston budget was in a deficit,” says Neighborhood Centers Vice President Claudia Vasquez. “In order to happen, it would need a lot of work.”

Over the next few months, the youth — a group of over a dozen young skateboarders — met amongst themselves and with Neighborhood Center staff to develop a proposal. They surveyed other skateparks around the country, analyzed the prevalence of skating in the neighborhood and came up with a plan for how to raise the money. They designed their dream park on a video game called Skate 3, preparing a presentation for Laster and Joe Turner, Houston’s director of Parks and Recreation.

Before that meeting, Turner had been doubtful about finding the funding for such a project. But after seeing the youth’s multimedia presentation and 20-page report, “the parks director was dutifully impressed, and that began the process of trying to plan for a much larger skatepark that is now designed,” says Laster. “It developed a life of its own.”

A plot of land was identified, a corner of Burnett Baylor Park that had previously been covered with manmade mounds. “We were blown away because that’s our neighborhood,” says Wiederman, a Houston native.

Over $600,000 of park funding was dedicated to the project, in addition to $100,000 from Neighborhood Centers, and over $350,000 from Laster’s council district service funds. Wiederman and the other youth also raised funds by tabling at neighborhood festivals, where they sold T-shirts and original artworks. They continued to work with architects and engineers, settling on a final design for a 17,500-square-foot skatepark with a large pool-like bowl, several grind ledges, stairs and handrails, and more.

Kaitlin Asch, a 19-year-old skater who joined the planning team about a year ago, says it’s a good place to learn. “Which goes into what we plan to do as a group after it’s built,” she says. “Because of course we don’t just want it to be a built park and forget about it. We want to bring the next generation and the community of kids out to the park and get them motivated to skateboard.” She says she was welcomed into the planning team with open arms, an openness reflective of the skating community as she knows it.

Ground broke on October 15, and the park is expected to be complete about a year from now. In the meantime, Wiederman, Asch and the other youth will assist Las Madres del Parque, a group of local mothers who try to keep the park clean and safe. Laster says the majority-Hispanic Gulfton, Houston’s most densely populated neighborhood, has historically been associated with crime and gang activity, but a lot has changed over the past decade. He sees the skatepark as part of that trend. “Everything that we can do to provide a positive alternative to our kids is great for the community,” he says.

Asked whether they see the city differently now, Asch and Wiederman reply in unison, “Most definitely.” Skating on the east side of Houston recently, Wiederman came across a makeshift skate spot with poor lighting. Talking to the skaters there, he learned they wanted to get lights, fix the cracks in the pavement and repair a hole in the roof over the basketball court.

“I was like wow, you guys sound like you have a plan. I’m going to come back over here after my project is done,” he says.

He and Asch will both start college in the spring. Asch will be getting her teaching degree. “Since I was doing this project, it got me more interested in architecture and urban landscaping,” Wiederman says, “so I might look more into that.”