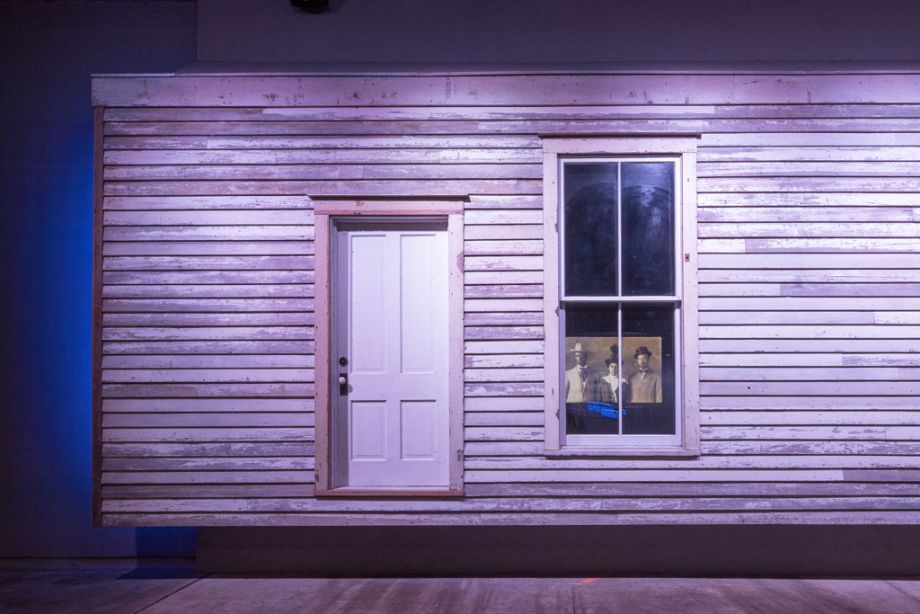 Beneath an overpass in Houston, one block north of City Hall, one block east of Buffalo Bayou, the Houston oracle invites passersby to muse on the city, past and future.

There, building on his lighting work for the Buffalo Bayou Park, artist Stephen Korns has installed a multisensory video, audio and sculpture work where Bagby Street passes, for one block, beneath the convention center. Whereas Korns’ work typically deals with perception of and access to nature, this installation, titled “The Houston Oracle in Two Parts,” takes a kaleidoscopic view of Houston history, a fractured and mysterious archive Korns hopes will also speak to the future.

“It’s looking for signs about what the city is or can be,” he says. “What is its potential in the present, based on the evidence?”

Here’s the evidence accumulated in the tunnel-like space on Bagby Street: On one side of the roadway is a corrugated metal facade reminiscent of Houston’s industrial buildings; on the other, a facade of reclaimed residential siding, reminiscent of a simple, early house. Each has a window, and in each, a video monitor flickers.

In the faux-industrial building is footage of Earth captured from the International Space Station. In the faux-house is a video of an archivist’s hands as she flips through 100 portraits of Houston families from 1870 to 1970.

Audio plays throughout the space: The voices of Houstonians asking questions of themselves and each other, across the decades. “When did you last have your photo taken? Where does your food come from?” they ask.

“It’s an archive about living in the city, what the city has been and what it can be,” says Korns. The space station footage pays homage to Houston’s connection to NASA; the metal siding to the city’s industrial roots; the stage-set atmosphere to the installation’s location in the theater district; the portraits to the city’s changing demographics. On a conceptual level, Korns says the installation — located two blocks north of the Houston Public Library — is about understanding how the city functions as an archive, and about the concept of archive itself.

“Who creates the archive, what gets into it, what histories are represented, who has access to it?” he asks. The questions of Houstonians, playing throughout, pay further homage to the idea of the oracle, the wise intermediary who makes prophecies or answers questions. Korns says, “I want people to pause and look closely at a place, confident there’s something hidden to be found.”

And sure enough, there’s another hidden dimension to the installation. In the early 2000s, Korns designed the lighting and public art master plan for nearby Buffalo Bayou Park. Houston experiences few dramatic seasonal shifts, so Korns and his team wanted to call attention to what does change in nature.

“Our view, looking at lighting and public art as both elements of a sympathetic design scope, was that you had to recognize that the bayou changes, that nature changes, that to catch nature you have to catch it as it changes,” he says.

They hit upon the lunar cycle. For about 5 miles along Buffalo Bayou, special lights change over the weeks from blue to white and back again as the moon waxes and wanes. The Buffalo Bayou Partnership, which has also embraced unusual venues for art, will gradually expand the lunar lighting about 7 miles downstream to the ship canal as other projects along the bayou take shape. Ultimately up to 15 miles of the lightning may be installed. Korns’ original plan called for incorporating more sites farther off the river, potentially even office buildings.

Now the Bagby Street installation is a moon clock too, its lighting changing between blue and white. The lighting is one element drivers will likely notice from their cars, but the installation is distinctly intended for pedestrians, a way to stoke their curiosity and encourage them to walk through.

“[These underpasses] do sometimes work as barriers,” says Debbie McNulty, Houston’s director of cultural affairs. The city, which has grown to encompass the highways that were once its boundaries, has many of them. Often dark, narrow spaces, sometimes filled with trash, these underpasses don’t exactly encourage walking in a city already known for its car culture. McNulty compares the transformation of the Bagby tunnel to Discovery Green, once an asphalt parking lot she would never have walked across into a park that she crosses all the time.

“Making those spaces more functional, multifunctional, and more pleasant is stepping away from car culture,” she says. The Bagby Street underpass was slated for transformation by former Mayor Annise Parker because of its prominent location; McNulty says others could eventually follow.