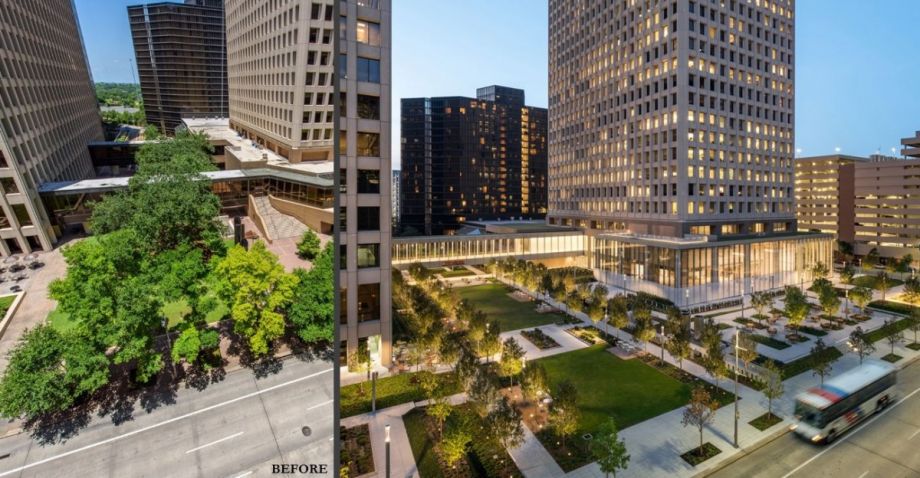 “The Acre,” before and after.

The Allen Center, a grouping of three skyscrapers and a hotel taking up more than three million square feet of land in downtown Houston, is under renovation, and everybody’s been talking about the one-acre park outside. In fact, the developers hail it as the signature feature of the multimillion dollar makeover. They call it “The Acre.”

The Acre is like a mega courtyard, cutting between the tall buildings, transforming a patch of concrete hidden from the street by a few trees into an inviting green space easily visible and open to the public. The lawn, planted with native prairie and wetland prairie seed mixes, and the 300-plus trees should soak up hundreds of thousands of gallons of water per year. The project has been championed by civic development groups Central Houston, Inc. and the Downtown District.

The timing was just right for The Acre to make an impact—at least as an idea. Though the idea had been proposed long before Hurricane Harvey, the park opened last October, shortly after nearly a year’s worth of rain fell on Houston in three days, leading to billions in damages and raising questions about overdevelopment in a city notorious for its highways and lax zoning regulations.

The reimagining of Houston won’t come as easily as it has for the Allen Center, but there are expectations for green space to be one of the most important and quickest fixes to the city’s flooding issues. Whereas parking lots, roads, and other paved areas exacerbate flooding by accelerating water runoff, green spaces trap and absorb water, holding it back and releasing it more gently.

In Houston, architects, park advocates and academics suggest the awareness for more parks and green spaces — and upgrades to existing parks — has skyrocketed, much more than after Tropical Storm Allison in 2001 or the major flooding events preceding Harvey in recent years.

“It has really escalated since Harvey,” says Chip Trageser, managing principal for OJB Landscape Architecture, which designed The Acre. “It’s at the forefront of every conversation in every Houston project we do.”

The stereotype of Houston as a highway-choked metropolis is often overdone, but the city is undeniably lacking in green space. The Trust for Public Land, in its most recent Park Score rankings, placed Houston 81st out of the 100 largest cities in the United States for amount of parkland, park spending and park proximity, among other factors. When Mayor Sylvester Turner held a press conference shortly after the hurricane to introduce Marvin Odum as chief recovery officer, Turner spoke of the need for building a resilient city. The first aspect of resiliency he brought up was expanding green spaces and parks. In a recent interview with Next City, Turner said he had just left a meeting with a steering group devoted to the reconfiguration of I-45, a highway cutting through downtown. They were discussing a proposal for a highway cap park, covering a below-grade highway with a new green space. Turner said there could be room this type of green space in Midtown, better connecting the East Downtown neighborhood with greater downtown Houston.

“The focus was not on the construction,” he said of the meeting. “The focus was on how do we turn this into a major park and greenspace project.”

Another project involves redeveloping the former Inwood Golf Course, located about 15 miles north of downtown, into a water detention basin doubling as a park. Turner said the redevelopment has been fast-tracked, post Harvey.

Houstonians are on board. In November, voters approved $104 million in park improvement bonds. The Harris County Flood Control District, which designs and maintains flood control infrastructure in Harris County (which includes Houston), has seen increased awareness from the public post-Harvey.

A part of the Bayou Greenways 2020, a redevelopment of over 3,000 acres that will also create 80 new miles of trails along bayou parks. (Courtesy F. Carter Smith)

As of mid-January, it had received 841 applications from homeowners to participate in the district’s buyout program since the hurricane, says Matt Zeve, the organization’s director of operations. The buyout program pays homeowners whose homes are “hopelessly deep” in a floodplain to move, allowing the district to restore the land to a state that can actually help prevent future flooding — by modifying the terrain, for example, or by building parks.

The 841 applications represent almost one-fourth of the 3,700-plus total applications the district has ever received, dating back to the 1980s.

“What’s really gratifying from my perspective is to see the hunger here to get it done but also the political will to get it done,” says Beth White, president of the Houston Parks Board, a nonprofit that since 1976 has used public-private funding to improve the city’s parks. “I think you’re going to see a different Houston in a fairly short period of time. Folks around here when they tend to do something they get out here and do it pretty quickly.”

The Board’s biggest project yet — and one of the most ambitious in the country — is the Bayou Greenways 2020, a redevelopment of over 3,000 acres that will also create 80 new miles of trails along bayou parks. In 2012, Houstonians voted to fund $100 million of the project through a bond measure. The Board is raising another $120 million through the private sector.

Despite public buy-in, two obstacles to swift change will be space and funding. The Flood Control District, for instance, needs about $170 million to buy those 841 properties. So far Harris County has only applied for a $17 million FEMA grant for buyouts post-Harvey, enough for 104 homes and is seeking additional Harvey-related buyout funding. Houston’s park budget decreased from $43 per resident in 2012 to $35 in 2017, according to The Trust for Public Land, among the lowest in the nation. In comparison, Dallas spent $81 in 2017, San Antonio $94 and similarly sprawling Phoenix $79.

The Houston Parks and Recreation Department owns about 38,000 acres of parks, nearly the same as it did 10 years ago. A 2015 Parks Department study found areas outside The Loop most lacking in green space, especially northeastern and southwestern Houston. These areas were also among the hardest hit by flooding. Much of the Parks Department’s focus has been revitalizing existing parks, often turning them into natural spaces with prairie grasses better suited for soaking up rainwater. But it also must add new parks to meet stormwater retention goals. Just under half of residents live within a half-mile of a park. The Parks Department has set a goal of bringing that number to 75 percent.

For a city adding over 15,000 people per year, every bit of parkland will count to reach that goal. The Acre again provides an example for how private funding and the backing of neighborhood groups can lead to quick changes to the landscape. The project was announced in May 2016 and completed by October 2017.

“In almost every neighborhood,” said Hanadi Rifai, director of the Hurricane Resilience Research Institute at the University of Houston, “you will find the opportunity to do something like that.”