How Community Engineers Are Changing Houston – Next City

How Community Engineers Are Changing Houston 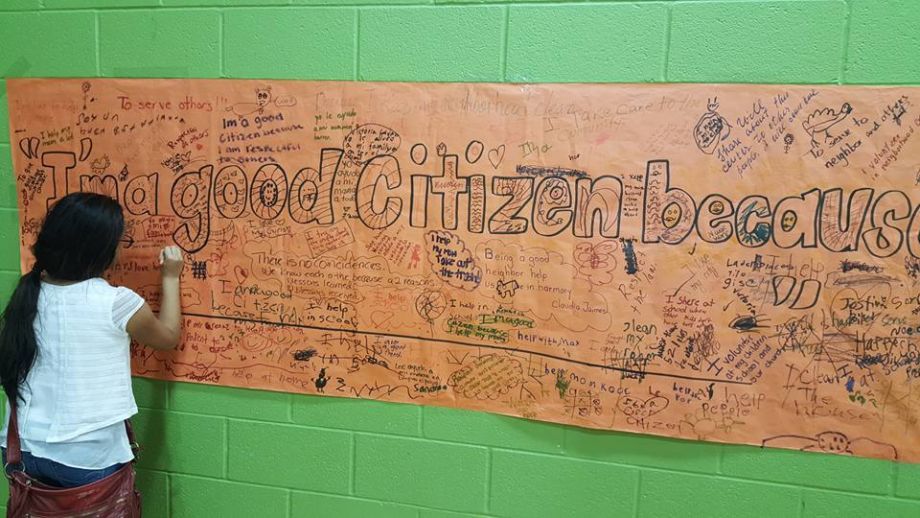 Houston’s Neighborhood Centers changed its script for supporting community-driven development about a decade ago, and something interesting happened. Instead of looking at problems, they started with a community’s own hopes and dreams, aspirations and strengths.

“We had to ask the questions three times,” says Angela Blanchard, president and CEO, of Neighborhood Centers, a century-old nonprofit. “They were so conditioned to talk about their community from this negative lens. And then when they realized we wanted to know what they liked about it, it was like the floodgates opened.”

“We mapped it literally, put it in a big diagram and we gave it back to the community,” she says. “Being able to see what was hidden just made it manifest.”

They gathered over 300 people in an auditorium at Lee High School in southwest Houston, almost all of whom they had talked to, who saw for the first time the way they were connected, the institutions they had talked about, all the neighbors they had spoken about, a giant map of all that on a projector screen.

“I said from now on, this is it. We have to turn in the other stuff, but this is it,” Blanchard says.

By “stuff,” she means grant proposals, needs assessments, strategy memos and other paperwork littered with statistics and descriptions of problems in the communities where Neighborhood Centers works around the Houston metropolitan area. It’s a ton of paperwork for a $260 million budget coming from 37 federal, state and local sources, including grants or contracts from the Departments of Education, Agriculture, Labor, Health and Human Services, Housing and Urban Development, and the Treasury.

Neighborhood Centers, which has 1,200 staff and 7,000 volunteers scattered across 70 locations, and reaches nearly 600,000 people in low-income households, keeps hunting for new ways to hear those community voices. One of their latest evolutions is the community engineers program, started in 2013.

“We recognized a need to work to strengthen natural leaders, those who may not be the people that have had a formal position, but they’re the people that others already trust and go to in the community,” Blanchard says. “How do we continue that work and strengthen these individuals to really have a voice?”

Started as an organic experiment, the community engineers program provides leadership training to people in the Houston region. Participants learn how to ask the same questions Neighborhood Centers started asking a decade ago, how to recruit and organize volunteers and community assets, and how to build a political base — all starting from a point of recognizing community strengths and agency instead of weaknesses and problems. In 2014, there were 120 community engineers; in 2015, there are 84 so far.

According to Neighborhood Centers, 52 percent of community engineers report engaging in their community at the grassroots level, such as going door-to-door to talk to neighbors about things like education or voting. Another 48 percent report engaging at the community level, such as pulling leaders and organizations together to establish and work toward a shared goal.

“I don’t like to talk about empowering people. People have power. They have voice. We just help them get to City Hall,” says Bolivar Fraga, who leads the program, which consists of about 12 hours of training.

At each of Neighborhood Centers’ locations, staff gauge interest and a sense of where neighbors’ schedules overlap. Once they get around 10 schedules lined up, they contact Fraga to get on the training session calendar.

“We work around what works best for the group in each center,” Fraga says.

Cohorts can meet once a week, less often or more often. Eight sessions is about average. Some locations, such as their Cleveland-Ripley Center, have access to ESL classes as a recruiting pipeline, leading to groups as large as 90-plus. Each location may have more than one community engineers cohort going at a time.

Karina Medrano and Liliana Aguirre were in one of the first groups, in Spring 2013.

“I joined because I’m trying to build a better community for youth. I want to see young people more active, to see that leaders emerge from the youth,” says Medrano, an insurance agent who has lived in Houston for 15 years.

“The idea that we are community engineers, it says a lot,” she says. “It gets your attention when we use that title. People can start imagining that we’re about building and constructing community.”

Back in 2013, the top item on their community’s agenda was stray animals. After going through the training, Medrano and Aguirre organized a group of their neighbors in Houston’s East End to advocate to increase the city’s animal control funding. The advocacy process took a little over a year, lasting through local elections in November 2013. They asked for a 100 percent increase. They got 80 percent, plus a new city-funded $250,000 partnership with Emancipet, an Austin-based nonprofit, to operate a mobile spay and neuter clinic around their neighborhoods in Houston’s East End.

Next on the agenda? Housing.

“We want to balance between new development and existing residents,” says Aguirre, who has been a Houston resident for 15 years.

Houston’s East End is currently in the crosshairs of development that could cause displacement. The city infamously doesn’t have zoning. To strike that balance, communities can apply for a special minimum lot size, which would help preserve existing housing stock against redevelopment that would price out existing residents. The city must have assurances that “there is sufficient support from property owners” affected to approve a minimum lot size application. Part of the challenge for Houston’s East End, where most residents rent, is that most rental property owners don’t live in the area, according to Fraga.

Meanwhile, Aguirre and Medrano are also training to become facilitators in the community engineers program.