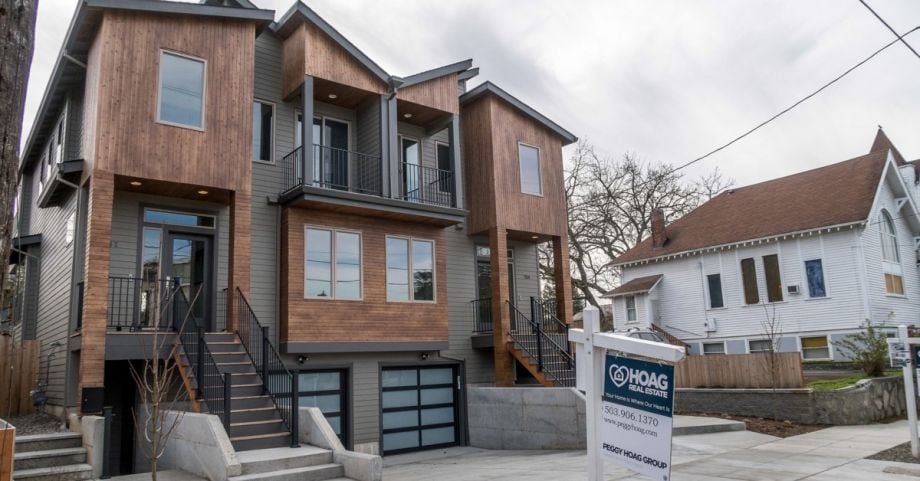 Portland’s city council voted Wednesday to allow up to four homes on almost any residential lot, or six with strict affordability requirements, The Oregonian reports.

Proponents of the changes, such as the think tank Sightline Institute, say the changes are among the strongest and best in the country.

Among the reasons why: In Vancouver and Minneapolis, which re-legalized duplexes and triplexes, respectively, in 2018, the size of the lot restricts the size of the home that can be built on it, regardless of the number of units being built. This limits the practical ability of developers to build more units. In Portland, duplexes can be up to three-fifths the square footage of their lot, and triplexes and fourplexes can be up to 70 percent of the lot area.

The city estimates that this zoning change will add 5,000 residential units in previously single-family-only neighborhoods over the next 20 years.

The Residential Infill Project, as the new change is known, also reduces the maximum size of new homes that can be built and removes the requirement to include off-street parking.

Commissioner Amanda Fritz was the only councilmember to vote against the plan, calling it “the saddest vote” she’s cast in her 12 years on the council.

“By allowing development far from centers and corridors, we are allowing housing to be developed in areas without safe, immediate access to transit,” Fritz said, according to the Oregonian. “We are promoting our continued reliance on cars, which is antithetical to our climate goals.”

But Commissioners Jo Ann Hardesty and Chloe Eudaly, and Mayor Ted Wheeler say the changes are needed to handle a predicted influx of new residents; a city study in 2015 projected that Portland would gain a quarter million residents by 2035.

Two key players in the “Moms 4 Housing” movement, which took over a vacant home in Oakland earlier this year, are running for office.

The Daily Californian reports that Moms 4 Housing co-founder Dominique Walker is running for the Berkeley Rent Stabilization Board. Walker, who has experienced homelessness, plans to help small landlords and tenants against companies which have been bailed out.

She tells the Daily Californian that if elected, she will represent the working class, including those who can’t afford high housing deposits.

In a statement to The Daily Californian, Walker said, “We plan to keep organizing and pushing for policy change and doing the right actions and campaigns to get mothers and children off the streets.”

Another activist from “Moms 4 Housing” hoping to make change is Carroll Fife, the director of the Oakland office of the Alliance of Californians for Community Empowerment, which supported the Moms 4 Housing protest.

According to the Mercury News, Fife is running for Oakland’s District 3 City Council on a housing-for-all platform, focusing on taxing large companies to pay for social housing and establishing a universal right to housing in Oakland.

Six other candidates are running against Fife, but political consultant Jim Ross told the Mercury News that in a “progressive” city like Oakland, “I think she has a real shot.”

Both Walker and Fife are known for their roles in the Moms 4 Housing protest, in which activists started living in a vacant, investor-owned home in part to call attention to the city’s homelessness crisis.

After negotiation with Oakland Mayor Libby Schaaf, Wedgewood Inc., the owner-investor of the Oakland home, agreed to sell it to the Oakland Community Land Trust for its appraised value, CNN reported. The trust plans to fix up the home and rent it back to the moms.

A new 37-unit permanent housing project in Salem, Oregon, that supports people at risk of or experiencing homelessness is expected to start moving in residents on August 24, according to the Salem Statesman Journal.

Six of the units at Redwood Crossings are dedicated to respite care, for people who have been recently released from the hospital. The remaining 31 units will include a bed, kitchenette, closets, sinks, and storage with a shared bathroom and foyer. All of the people living at Redwood Crossings will have access to housing, addiction and mental health services.

Salem Housing Authority will manage and operate the property, contracting with The ARCHES Project to provide on-site support.

Counselors, among other service providers, will meet with residents in onsite meeting rooms. Residents will also have use of community rooms for meetings, a courtyard, and items such as shoes and hygiene products from immediate needs stations. Residents will be offered holiday meals and cooking classes in the main kitchen. Bike storage and security will also be provided.

Salem Health will lease the six respite-care units to transition those discharged from hospital. Still under construction, those respite rooms will offer a stable place for residents to recover; they can stay as long as determined by their care team. That supportive, transitional service is critical, according to Jessica Blakely, asset and operations manager for the Salem Housing Authority.

The Salem Statesman Journal previously reported many of those in Salem who are experiencing homelessness were pushed out of downtown encampments after an emergency declaration during the pandemic; they turned to parks and other places for shelter.

As a low-barrier shelter, Redwood Crossings places few restrictions on who can qualify to live there. Sex offenders and those convicted of manufacturing drugs out of federal housing would be prohibited. Gross household income must be at or less than $24,750 to qualify. Blakely told the Statesman Journal that units will cost 30 percent of a resident’s income, or would be free for those with no income.

Residents are welcome to stay as long as needed or they can use this period of housing stability to secure other housing on their own or access other housing vouchers.

Other cities across the country are also joining the effort to meet the housing needs of those experiencing or at risk for homelessness. In Wilmington, North Carolina, WECT-TV reports that a new tiny home community planned for 2021 called Eden Village will offer 32 new 400 square foot homes to provide affordable housing for people experiencing chronic homelessness. This idea originated in Springfield, Missouri; the Eden Village there serves people with chronic medical, physical, or mental conditions that prevent them from being able to afford permanent housing.

The Salem project was four years in the making. City officials hope to alleviate the cycle of homelessness by providing accessible and stable housing.

“It isn’t just a building,” Salem Mayor Chuck Bennett told the Statesman-Journal. “It is a place where people’s lives change.” — Nicolette White