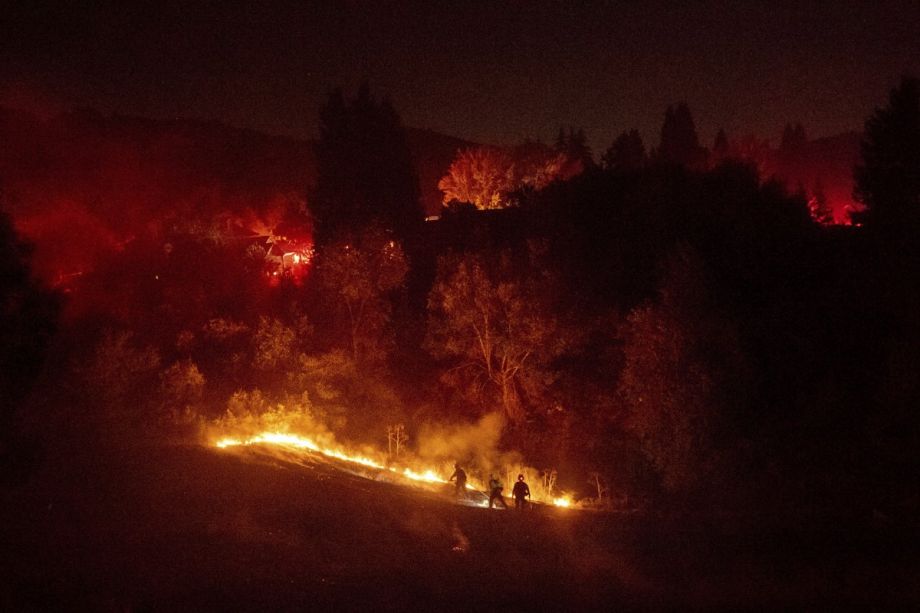 Firefighters work to contain a wildfire burning in Moraga, California, on Oct. 10, 2019. Police have ordered evacuations as the fast-moving wildfire spread in the hills of the San Francisco Bay Area community. The area is without power after Pacific Gas & Electric preemptively cut service hoping to prevent wildfires during dry, windy conditions throughout Northern California. (AP Photo/Noah Berger)

For decades, FEMA has paid homeowners in flood-prone areas to move, reducing communities’ vulnerability to disasters. But a new study finds that the money available for the buyout program goes toward wealthier communities rather than being distributed based on risk, the New York Times reports.

That’s because — the authors hypothesize — local officials have to apply to FEMA for money, and have to have the expertise and time to navigate the application process. Wealthier jurisdictions are more likely to have the resources to successfully administer buyouts.

Once the county does get the money, it’s usually used to tear down homes in poorer neighborhoods within that county, the authors said. There are a few possible explanations, says the Times:

Officials might feel that the poorer neighborhoods are genuinely the most vulnerable, [A.R.] Siders, [a professor at the University of Delaware and one of the paper’s authors], said. Those officials might also conclude that a given amount of federal dollars can go further purchasing a greater number of low-value homes, rather than buying just a handful of more expensive beachfront properties for the same amount

Another explanation, she said, could be that local officials “are using the buyouts as an opportunity to get rid of neighborhoods that they don’t feel are desirable parts of their community,” Ms. Siders said.

The study did find that the buyouts were going to purchase homes in high-risk zones.

Local officials in California have approved thousands of new homes in high fire-risk zones, greatly exacerbating the risk of dangerous wildfires, the Los Angeles Times reports. Those officials say that no area can be identified as too risky to build in, because even urban areas are at high risk for fire damage. However, research has found that more than 90 percent of buildings destroyed by wildfire are outside of urban areas, and the majority are found in sprawling suburban developments. That’s because wildfires that threaten people and homes in California aren’t caused by large forest fires; they’re caused by humans, spread by invasive plants and by leaping from roof to roof.

Wildfires are of course in the news because utility Pacific Gas & Electric Co. decided to cut electricity to up to 2 million people this week as a preventative measure. PG&E fears that high winds could cause electrical lines to spark fires, the LA Times said. The utility has not met its own goals for repairing poles and adding other resiliency measures, the Times reported in a separate piece.

In April, a federal judge in San Francisco excoriated PG&E for paying billions in dividends to shareholders instead of paying for tree trimming and maintenance work.

Have Landlord Issues in Chicago? Rentervention Bot Is Here to Help

Chicago tenants who face eviction or maintenance issues have a new ally in their corner: a chatbot. Rentervention is a free service to help Chicago renters, developed by the Lawyers’ Committee for Better Housing, Illinois Legal Aid Online and the Lawyers Trust Fund of Illinois. Block Club Chicago reports that tenants can visit the Rentervention website or text 866-773-6873 to access help. After a tenant answers a series of questions, Rentervention will either generate a letter the tenant can send to their landlord, provide advice or refer tenants to pro bono attorneys.

The lawyers who created Rentervention said there isn’t enough legal aid available to meet the demand for people facing evictions. “We decided that one of the most impactful things we could do would be to invest in figuring out scalable ways to serve large numbers of people, for free, who can’t afford a lawyer or don’t have access to one,” said Hanna Kaufman of The Lawyers Trust Fund told Block Club Chicago.