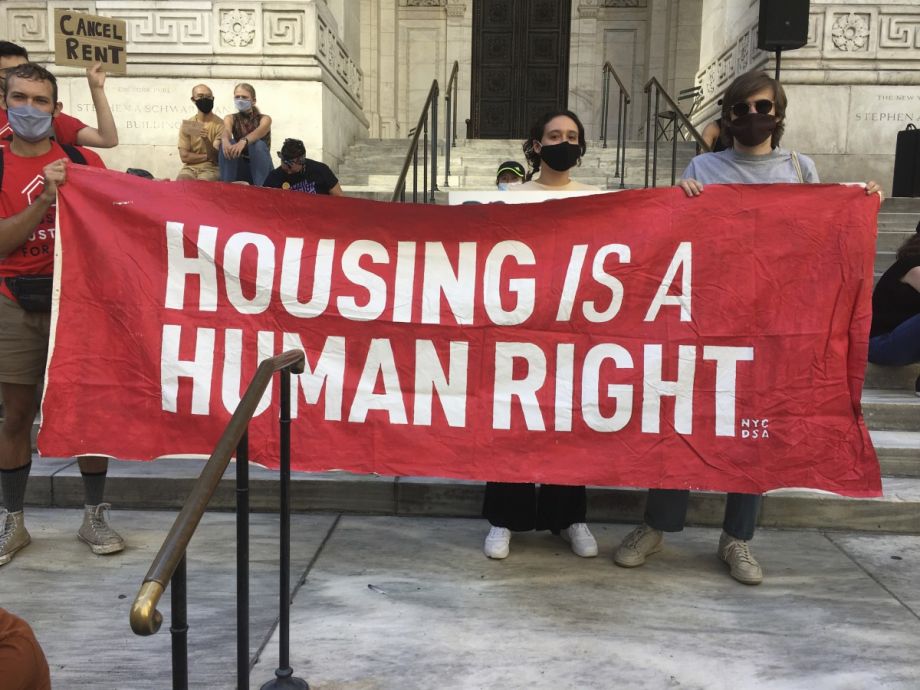 The Centers for Disease Control issued an order this week implementing a “Temporary Halt in Residential Evictions to Prevent the Further Spread of COVID-19.” The order is meant to prevent landlords from evicting tenants who are struggling to pay rent because of the coronavirus pandemic, and it is in effect through the rest of the year. It applies to a broader swath of landlords than previous federal eviction bans — applying to any tenant struggling to pay rent due to a loss of income or medical expenses — but is likely to face legal challenges.

“In the context of a pandemic, eviction moratoria—like quarantine, isolation, and social distancing—can be an effective public health measure utilized to prevent the spread of communicable disease,” the order says. “Eviction moratoria facilitate self-isolation by people who become ill or who are at risk for severe illness from COVID-19 due to an underlying medical condition. They also allow State and local authorities to more easily implement stay-at-home and social distancing directives to mitigate the community spread of COVID-19.”

The order does not suspend rent, relieve tenants of their obligations to pay landlords, or provide financial assistance. To receive protections from the moratorium, tenants must complete CDC-provided forms and attest that they are unable to pay rent because of a loss of income or medical expenses, and that eviction would likely leave them homeless, as the New York Times reported. Diane Yentel, the executive director of the National Low Income Housing Coalition, said in a statement that the moratorium is “long overdue and badly needed,” but also “a half-measure that extends a financial cliff for renters to fall off of when the moratorium expires and back rent is owed.”

Others have said that it’s not obvious where the order would apply. In Florida, for example, it isn’t clear whether the state’s eviction moratorium is “stronger” than the CDC’s or vice versa, so advocates and legal experts aren’t sure which one is operative, according to a report in the Orlando Sentinel. Some are expecting the order to be challenged in court, according to a report in the Philadelphia Inquirer. The CDC order arrived just as the federal moratorium adopted as part of the CARES Act was expiring. And state and local moratoria continue to expire, creating confusion for tenants, landlords, and advocates. On Thursday morning, even with the CDC order in place, the Philadelphia Tenants Union was blocking entrance to the city’s eviction courtrooms, trying to prevent any tenants from being newly displaced, the Inquirer reported.

Four tenants of the New York City Housing Authority appeared in a two-minute video that aired at the Republican National Convention last week, even though three of them later said that they are not supporters of President Donald Trump and did not know that their interviews would be used for a political ad, according to a report in The New York Times. The interviews were organized by Lynne Patton, regional administrator for the Department of Housing and Urban Development, according to the report. The tenants spoke about conditions in their housing units — NYCHA has a massive backlog of maintenance and repair needs — and criticized New York City Mayor Bill de Blasio, according to the report. The Times interviewed all of the tenants after the video aired. One said she was a Trump supporter and knew that the interview would be used at the RNC, but the other three said they had no idea it would be used that way and that they were opponents of the president, according to the report. Claudia Perez, one of the tenants, was “furious” that her interview was aired at the RNC, the report said.

“I am not a Trump supporter,” Perez told the Times. “I am not a supporter of his racist policies on immigration. I am a first-generation Honduran. It was my people he was sending back.”

According to the report, Patton and a Trump campaign spokesman claimed that all of the tenants were aware of how the video would be used. Even some of the tenants who were angry at how their interviews were used stood by their criticisms of de Blasio, according to the report. As Next City noted last month, the New York City Housing Authority is pursuing a new plan to get funding for repairs, which some observers say is a longshot.

A law adopted in Cincinnati earlier this spring gives cash-strapped tenants an alternative to expensive upfront security deposits when renting a new apartment, as the Huffington Post reported in a feature last week. The program, called “renters’ choice,” requires landlords to accept alternatives to a lump-sum deposit, in the form of an installment agreement or small monthly “insurance” payments, the story says. Such alternatives give lower-income tenants a more realistic chance to secure new housing, and could tenants in Cincinnati navigate the coronavirus recession, the story suggests.

“Cincinnati’s renters’ choice legislation applies to all landlords with 25 units or more and offers three options: an insurance premium, in which the tenant pays a small monthly, nonrefundable fee instead of an upfront deposit; an installment plan to spread the deposit equally over six months (or more if the landlord agrees); or a reduced security deposit, paid upfront, of no more than half the monthly rent,” the story says.

In addition to Cincinnati, lawmakers in Virginia, Pennsylvania, Alabama, and North Carolina have implemented or proposed similar laws, according to the report.

Editor’s note: We’ve corrected the language in the first item about the CDC’s eviction ban. The order does not require that a tenant prove that their inability to pay rent is related to the coronavirus, just that they demonstrate that they have experienced a loss of income or extraordinary medical expenses.