Housing in Brief: Amid Teacher-Mayor Standoff, a Housing Task Force Is Born – Next City

Housing in Brief: Amid Teacher-Mayor Standoff, a Housing Task Force Is Born 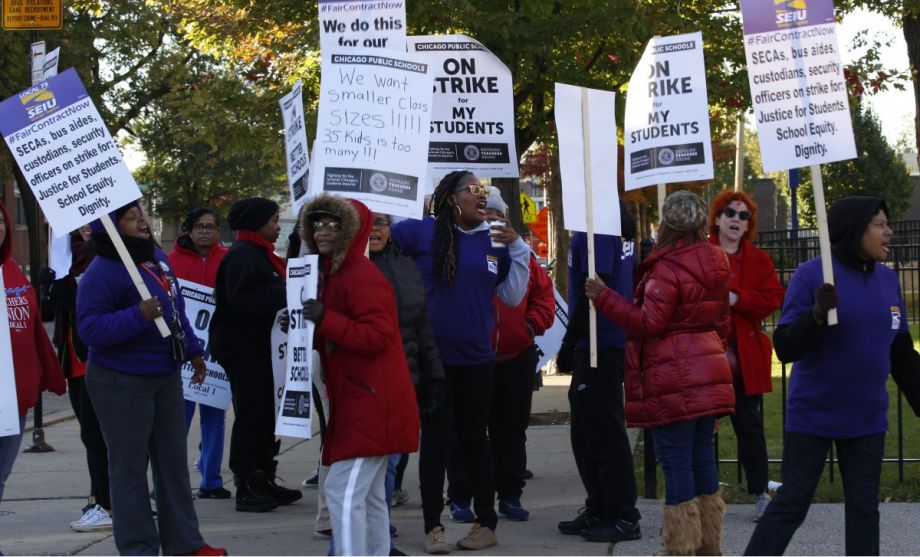 Striking teachers picket outside George Leland Elementary School on Chicago's West Side on Thursday, Oct. 17, 2019. Among the issues they are striking for include smaller class sizes, adding support staff and expanding the city's inclusionary zoning ordinance, so that lower-paid school workers could afford to live in the city. Educators in schools in low-income neighborhoods like this one also say they get less funding and staff compared with schools in wealthier areas of the city. (AP Photo/Martha Irvine)

Amid Teacher-Mayor Standoff, a Housing Task Force Is Born

“With the Chicago Teachers Union demanding that she create more affordable housing, Mayor Lori Lightfoot is forming a task force to study a key ordinance aimed at doing just that,” reports Crain’s Chicago Business. In contract negotiations, the union has been fighting for improvements to the city’s inclusionary zoning ordinance because, according to a union rep quoted in the Chicago Sun-Times article, “lower-paid support staff … don’t make enough to live in the city, even though they are required to.” The teachers went on strike Thursday. Lightfoot has expressed frustration over getting stuck on what she believes isn’t a core matter to the union contract.

As for the timing of the task force formation, the city’s housing commissioner told Crain’s: “This has been in the works for us for quite a bit longer than there has been any urgent talk of striking.” Next City has covered Chicago’s affordable housing policies, problems and solutions — as well as how the collective bargaining power of labor unions can also lead to benefits for everyone.

In an opinion piece for the San Francisco Chronicle this week, California Earthquake Authority CEO Glenn Pomeroy suggests that residents of the Golden State aren’t nearly prepared enough for a whopping round of seismic damage. Scientists predict that an earthquake Californians call the “Big One” will hit in the next 30 years but, Pomeroy writes, “only about 10 percent … have earthquake insurance.” He encourages renters and homeowners to tap his state-backed organization’s range of affordable insurance policies to “help prevent our current housing crisis from suddenly becoming far more acute.”

As Next City has reported, California’s natural disaster risks due to climate change — from destructive fires to sea-level rise — are forcing more communities to consider policies that will lead to resilience. When the city of Berkeley released its resilience strategy, one official told Next City, “We know that in the event of a major earthquake it will affect every aspect of our community, and we know that low-income housing units, for example, will be affected at a higher rate.”

Housed, Yet Homeless, in Oregon

Central Oregon news outlet The Bulletin reports on an increase in the number of people in Deschutes County who “live on the streets … in RVs, trailers and other vehicles out of necessity because there are few affordable spots to live and not enough available spots to park them.” The county’s 2019 tally of people experiencing homeless was 12 percent higher than 2018’s total. (Someone living in an RV that isn’t connected to city services like water and sewer are counted.)

This isn’t a lifestyle choice: The Bulletin quotes an RV park manager who says that 85 percent of the calls she gets about space are people in “desperation,” and not in it for the recreation. The police get complaints about long-parked RVs, but a Bend, Oregon, police officer says city policy supports a less criminalized approach: “Our housing situation is expensive. So people remedy that by living in RVs and moving on every so often, which is understandable.”

Next City has previously covered a “new construction” tax implemented in several Oregon cities to fund affordable housing. Bend was a leader in that approach.