This Is What Housing Discrimination in the U.S. Looks Like – Next City

This Is What Housing Discrimination in the U.S. Looks Like

In the wake of the Great Depression, the U.S. government developed a system of federal agencies aimed at building community wealth through homeownership. This vast network built wealth at the family and community level for millions of people — but only if they were white. Building on centuries of inequalities, these discriminatory policies and practices led to rampant segregation.

An annual report released by the National Fair Housing Alliance Wednesday highlights the impact this segregation has had on fair housing, as well as the ways in which current policies and practices continue to reinforce and perpetuation segregation and inequality. The 108-page report, “The Case for Fair Housing,” compiles data from a large swath of fair housing organizations and government agencies to provide a contemporary snapshot of housing discrimination.

Here are some of the most striking findings from the report. 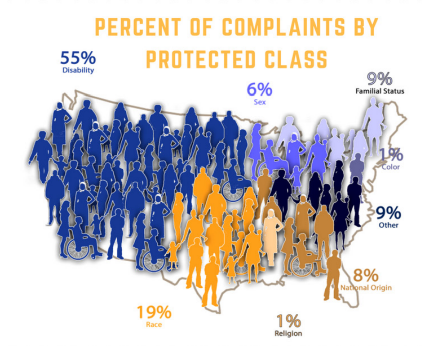 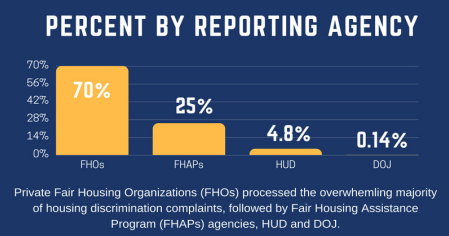 The majority of the complaints — 70 percent — were addressed by local, private fair housing organizations. Fair Housing Assistance Program agencies processed 25 percent of complaints, HUD processed 4.8 percent, and the DOJ processed only .14 percent. Local leaders and agencies in Chicago, Houston, St. Louis and elsewhere are working to tackle this problem, but are low on funding and support. It’s essential, NFHA says, for congress and the federal government to increase funding for local fair housing efforts, and for the philanthropic community to get more involved in solving housing discrimination. HUD and other government agencies also need to more aggressively enforce the Fair Housing Act.

Housing discrimination isn’t getting better. If anything, it’s getting worse. 2016 saw an uptick in housing-related hate activity, and since last fall there has also been an increase in hate crimes involving people who were harassed in their neighborhoods or at home.

The report highlights a few things holding the country back on making progress on fair housing, including a need for more advocacy, and that many prospective funders feel that its in conflict with their mission or corporate agenda to focus on fair housing. Another issue is simply apathy.

Part of the problem is that many of those who regard themselves as unaffected by inequities do not care that there are inequities. Some may believe they are insulated from inequities because of their wealth, race, religion, family status, or lack of a disability. But all communities do better — all people do better — when others do better. Increased opportunity for all does not mean decreased opportunities for others.

NFHA’s recommendations are mostly aimed at the federal government, including: create an independent fair housing agency; strengthen the Fair Housing Initiatives program; improve equal access to credit; and reestablish the President’s Fair Housing Council. Ultimately, NFHA argues, addressing fair housing is one of the most important steps the country can take toward becoming a more just and inclusive society.