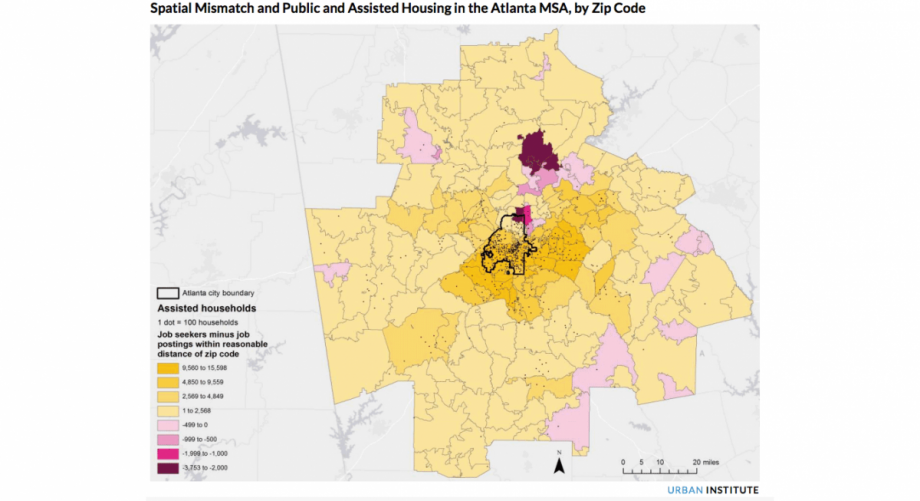 In Atlanta, households receiving housing assistance (represented by black dots) are clustered in zip codes where there are more job seekers than job postings (in orange). The pattern holds true in many cities throughout the U.S. (Map courtesy of the Urban Institute)

Housing assistance programs like public housing and Section 8 housing choice vouchers generally don’t do a good job of helping low-income families find homes near available jobs, according to a new report from the Urban Institute. Instead, the report shows, low-income families on housing assistance tend to see more competition for nearby jobs than unassisted families with similar incomes, raising questions about what policies could help reduce “spatial mismatch” in American cities, the report says.

The report is called “Spatial Mismatch and Federally Supported Rental Housing: Do Public Housing and Vouchers Help People Live Closer to Available Jobs?” A team of authors used data about federally supported housing assistance programs along with data from Snagajob, a search service for hourly jobs, to measure the difficulty that residents using housing assistance face in finding nearby jobs. Their definition of “spatial mismatch” was a comparison of the number of job seekers in a certain zip code versus the number of available jobs within a reasonable commuting distance. The team used the data to defined a “reasonable commuting distance,” which it set at 6.3 miles, based on the average distance between job applicants’ homes and the jobs they were applying for. In most of the 16 cities that they analyzed, assisted households experienced worse “mismatch” — basically, a smaller chance of securing a job within a reasonable distance — than unassisted households. And public-housing residents tended to fare the worst.

“Given our findings, low-income households may lack sufficient choice in where to live when they qualify for housing assistance,” the authors write. “Although public and assisted housing provides many benefits … our findings show that, on average, increasing proximity to net hourly jobs is not always one of these benefits.”

The results of the study weren’t uniform. In four of the cities — Nashville, Minneapolis, Boston, and Seattle — assisted families had somewhat better chances of accessing nearby jobs than unassisted ones. But in most cities, “spatial mismatch” was worse for residents on housing assistance, with the worst conditions in New York, Chicago, and Atlanta. In terms of assistance types, public-housing residents faced the steepest odds of finding a job nearby, and residents of project-based rental assistance housing (PBRA) and the moderate rehab program (which is no longer in use) faced better chances.

The report concludes that policymakers need to ensure that the housing they’re helping people to get is located closer to jobs. They suggest that cities could help address the issue by making sure that new project-based rental assistance housing is located near “areas with excess jobs,” banning discrimination against voucher holds or enforcing existing bans, and investing in public transportation, among other recommendations.

The researchers got a small grant to research spatial mismatch and a tranche of data donated by Snagajob, says Christina Plerhoples Stacy, a senior research associate at the Urban Institute and lead author of the report. The authors wanted to use Snagajob because that platform focuses only on hourly jobs — often those that pay minimum wage — which is a dataset not often found in “traditional” jobs data. In future projects, the group plans to look at how the availability of public transit networks affects spatial mismatch, based on whether people are willing to travel farther for work when they have more transit options, Stacy says.

“We’d also love to look at land-use policy to increase housing density in hopes of making housing more affordable,” Stacy says. “We’d love to use this data to explore whether and which types of land use reforms are able to reduce spatial mismatch.”

Stacy says it’s not clear whether neighborhoods that are farther away from an abundance of job opportunities actually face worse employment. But she says that spatial mismatch can be “a huge cost” for both employers and workers, independent of its impacts on employment rates. For employees, longer commutes cost more, and essentially reduce compensation from an already low-paying job. And Stacy says Snagajob told the researchers that hourly employers had reported having an especially hard time finding workers in neighborhoods that were changing and becoming more expensive, and that it was harder to retain workers who lived farther from the jobs.

One other recent working paper from the Terner Center for Housing Innovation at UC Berkeley looks at the impact of land-use regulations on spatial mismatch in California. The paper, called “Residential Land Use Regulation and the Spatial Mismatch between Housing and Employment Opportunities in California Cities,” studied how land use regulations increase commute times by separating jobs from housing. The author, Noah Durst, an assistant professor of urban and regional planning at Michigan State University, tells Next City that much research on land-use policies focuses on their impact on sprawl, housing production and costs, and residential segregation, but little is focused on how those policies worsen the separation between housing and job centers. His paper finds that in California, cities which prohibit high-density zoning tend to have greater income disparities between residents and the people who work there. In other words, low-density zoning is often associated with a resident base that is wealthier than the local workforce. The paper is relevant to the ongoing debates around zoning, affordability, and housing supply in California.

“That said, my analysis also suggests that high-density zoning can’t, on its own, address other mismatches — such as imbalances between the number of jobs and the number of housing units (or the number of affordably priced units) and the commute burdens experienced by workers,” Durst says in an email. “Indeed, other policies besides adopting high-density zoning — such as reducing or eliminating restrictions on accessory dwelling units, reducing parking restrictions, providing incentives to promote affordable-housing development, or adopting urban growth boundaries — might have more widespread support and may be just as effective at reducing spatial mismatches between housing and employment.”

As for the implications of the new Urban Institute report, Stacy points to the findings that show renters with housing choice vouchers face worse odds finding a nearby job than unassisted households with similar incomes. That disparity suggests that while vouchers may help pay the rent, voucher holders still have a tougher time finding housing than other renters, probably due partly to barriers to voucher use in various communities. While cities are currently restricted from building new public housing complexes anywhere — including areas that are close to hourly jobs — they can, the report says, consider passing new laws preventing landlord discrimination against voucher holders, or stepping up enforcement of existing antidiscrimination laws.