This Hospital’s Design-Build Mandate: Do No Harm – Next City

This Hospital’s Design-Build Mandate: Do No Harm 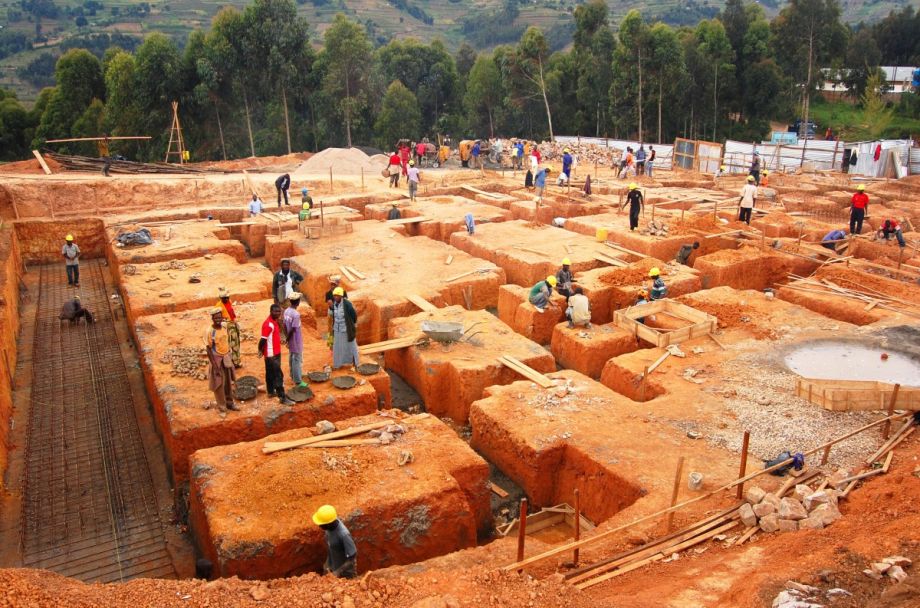 Local workers who built Butaro Hospital in Rwanda were given an atypical amount of respect, equality and opportunities for self-development. (Credit: MASS Design Group)

In Rwanda, there’s a hospital that started caring for residents before it even opened its doors.

“We’re very non-typical in why and how we’re doing what we’re doing,” says architect Kelly Doran. Doran works in the Kigali office of MASS Design. The Boston-headquartered nonprofit focuses on holistic architecture. Working with the NGO Partners in Health, founders Michael Murphy and Alan Ricks launched the firm in 2008 specifically for the Butaro project — one of two districts in the country that then lacked a public hospital.

Through their alliance with Partners in Health, MASS Design gained not only a partner, but also a philosophy. Partners in Health, a nonprofit founded in Haiti in the 1980s, emphasizes “a preferential option for the poor” — which means providing services that extend beyond what wealthy people access, to offer additional support or empowerment to impoverished patients.

Doran says that, for MASS Design, the philosophy translates to “leveraging the construction process as much as possible to build the capacity of the local community, to invest in it, to have as much of the project money as possible to go directly to the local community,” in Butaro, as well as “looking for every opportunity to … use local materials.”

The philosophy is a radical departure from how many construction projects are run. Worldwide, the words “construction industry” are more likely to evoke troubling news than optimism. In the past month, the origin of many migrant construction workers in earthquake-ravaged Nepal has led to questions about how rebuilding in that country will occur. Even before that tragedy struck, work conditions that killed one worker every other day on World Cup-related construction projects in Qatar led to a global outcry.

Rwanda stands apart from that debate; the hilly central African nation is neither a departure or arrival point for many guest construction workers. It also deviates from broad trends in sub-Saharan Africa, where hastily constructed, overcrowded slums often offer economic survival at the cost of health and safety. Instead, the government of this small country has tirelessly advanced education, health and development — while enforcing strong limits on the changes citizens can initiate themselves. “There aren’t even large slums in Kigali,” reads a 2013 New York Times article on the politics of Rwandan development. “The government simply doesn’t allow them.”

But the uncommonly tidy capital implies nothing about wealth, and underdevelopment lingers. The typical Rwandan lives on less than $1.50 a day, and Doran describes many who rely on informal ditch-digging jobs to earn that wage. Poverty constrains construction, which is often also completed with precariously employed day laborers. Meanwhile, architecture — the art and philosophy guiding all of construction’s sweat-won achievements — is nearly nonexistent in Rwanda.

“When we enrolled in the architecture program, we honestly didn’t know what architecture was,” a graduate of a 2013 Rwandan university architecture course admits in the 2013 book Afritecture: Building Social Change. “We had to search on the Internet to find the definition.” Over a century after Sullivan first wrote that “form follows function,” traditional wattle-and-daub buildings dot much of the country’s green hills in lieu of formally designed structures.

That said, Rwandans have no resistance to change. “People are eager to get into construction,” Doran says, citing local poverty. Prior to its completion in 2011, the Butaro Hospital build employed some 3,000 people. “A lot of it’s just simple labor, just lugging things back and forth,” Doran admits. But they also offered training in skilled techniques to Rwandans who otherwise wouldn’t have the option to learn it — particularly stone masonry with volcanic rock taken from nearby Virunga.

With the building complete, many of those temporary jobs are long over — but the impact of the work experience lingers, Doran says. “There’s now a group of volcano stone masons who specialize in a kind of volcanic stone production, and they have 23 members, and they’re working on housing. In a region that didn’t have construction at all, we’re seeing the emergence of groups of subcontractors who are self-organizing.”

The organization also promoted the inclusion of women on construction jobs, striving for half of workers to be female. (“It’s been a male-dominated sector for no good reason,” Doran explains.) As a result, Kankwanzi, a female mason who has worked on four projects with MASS Design, has become a mentor for other burgeoning female stoneworkers. She now attracts female apprentices from as far afield as Uganda, Doran says.

Does this emphasis on developing local capacity reduce the quality of the final outcome? Not at all. Situated atop a hill, it allows patients to survey a lush green valley through large windows, which also improve ventilation to reduce infectious disease. The structure has intricate stonework, a wide balcony and colorful passageways, a combination charming enough to merit an international design award. The first and only public hospital in Burera district follows another Louis Sullivan rule: The structure grows naturally, logically and poetically out of its conditions.