Do Horse-Drawn Carriages Have a Place in “Smart” Kansas City? – Next City

Do Horse-Drawn Carriages Have a Place in “Smart” Kansas City? 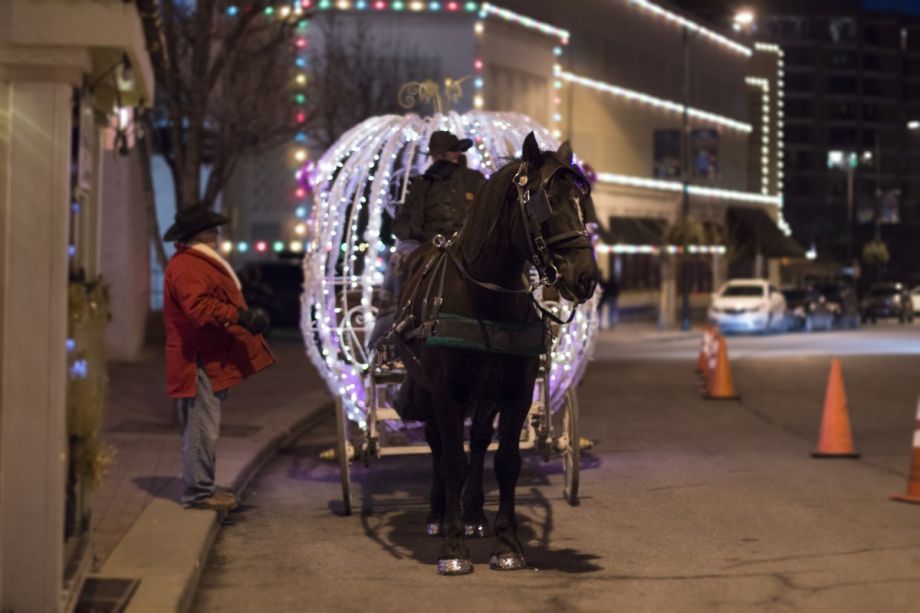 In December, a horse carriage crashed in Kansas City, Missouri’s central shopping district, the Country Club Plaza. Injuring three people as well as the horse, the incident quickly reignited a long-running local — and national — debate. From St. Louis to New York City, protesters have alleged animal cruelty when it comes to the rides for years. Immediately following the accident, Animal Action of Kansas City started an online petition to ban the practice.

But beyond whether these horses are victims of abuse, does carriage service even belong in a modern urban landscape, or a place striving to be “the world’s most connected smart city”?

In many ways, the Plaza has evolved into a Kansas City cultural hub, a designation typically granted to a city’s downtown area (downtown Kansas City is 3 miles north). Built in the 1920s as a suburban outdoor shopping mall, the area has steadily become a major center for commerce. On the surface, it appears very urban and very dense, similar to what one might find in any downtown. However, Spanish-style architecture and picturesque public fountains led one recent reality TV contestant to describe it as “old-town Disney.”

Cute as it may be, an urban planner will notice the gaping flaws in minutes. With a complete lack of bike lanes, near absence of bike racks, and sparse transit (only buses, and “frequent” service only along the eastern periphery), few people inside and out of Kansas City would describe the Plaza as “progressive.”

But it’s got horses.

This irony is difficult to ignore. In a district with abundant financial resources and cultural prominence, why would very basic 21st-century urban amenities be lacking? Much of it has to do with Kansas City’s problems at large: underfunded bike infrastructure, an early developing modern transit system and the relatively inflated power of fringe activist groups.

Too much, though, has to do with the fact that the Plaza was built as and remains a privately owned district with profitability as the implicit top priority. So why horse carriages? Economically, they draw tourists. They’ve also been a tradition on the Plaza since the 1970s.

It’s worth considering whether the presence of horse carriages is stunting the development of more fundamental infrastructure, particularly for bikes and transit. Traveling at roughly 3 to 4 miles per hour and taking up a full lane of traffic, the carriages effectively limit automobile traffic to one lane when on their route. For cyclists, that can mean hazardous merging or travel delay.

And while the horses have been a staple on the Plaza since the ’70s, that’s still about a century after animal-drawn carriages fell out of the norm in American cities. In fact, the Plaza was built in the 1920s and horse-drawn carriages played no part in its functional history.

“It is a great irony that the carriage horses have become a symbol of ‘good times gone by,’” says Julie Urbanik, a cultural geographer whose book, “Placing Animals: An Introduction to the Geography of Human-Animal Relations,” explores the history and significance of animals and wildlife in human-populated areas.

Indeed, the Country Club Plaza was originally developed to serve two groundbreaking transportation technologies of the time: automobiles and streetcars. To vaunt horse carriages there seems to contradict its original vision.

“The carriage horses represent a desire for a cultural experience of yesteryear but in a specific place that was designed to escape yesteryear and cater to the future — the automobile age,” says Urbanik.

In the absence of authentic historic preservation, the Plaza may send a message of urban stagnation, an unspoken desire to keep an otherwise progressive district from moving forward on the issue of transit or frankly, anything else.

Of course, a dearth of bike and transit infrastructure on the Plaza can’t be put squarely on the shoulders of the carriage companies.

“From a planning perspective, banning the horses may not have a real impact, so long as the same forces are still in charge,” says David Johnson, chair of the Kansas City Regional Transit Alliance. His efforts as an individual as well as through nonprofit KCRTA have been vital to pushing forward transit projects in the urban core, including the city’s new modern streetcar line in Downtown (from which a Plaza extension is currently being planned).

The Country Club Plaza’s private ownership has largely dictated development and infrastructure in the district throughout its history. Ownership changed last year, and Johnson and other civic leaders have renewed hope for progress.

“Past owners of the Plaza have doubled down on things like parking as the only solutions,” says Johnson. “The new owners will hopefully show they can think differently.”

The continued allowance of horse carriages in Kansas City’s highest-profile tourist district also seems to be at odds with the city’s “smart city” plans. Heavy public and private investments in tech infrastructure have resulted in the addition of Google Fiber, Sprint’s free downtown Wi-Fi zone, and KCMO Smart City Open Access data portal in partnership with Cisco. However, much of the effort has focused on the Downtown area, while the Plaza continues to project an ironic if not wholly contradictory identity to visitors both local and out of town. Underdeveloped progressive urban infrastructure exemplified by the horses paint a very dated picture.

So is there a future for horse-drawn carriages in Kansas City? If animal rights activists prevail, the city will likely go the way of Salt Lake City and others with a total ban. Perhaps the issue will become lost in political stagnation as in New York City? Or maybe the carriages can simply find a new home in a less frenetic part of town than the Plaza, such as nearby Loose Park or Swope Park (or perhaps a district that historically did rely on horses)?

Regardless, it’s time for Kansas City, and many other “smart” cities, to critically ponder the message they send by permitting horse-drawn carriages and other dated urban iconography.

Braden is an urban geographer and musician from Kansas City, Missouri. He is the co-founder of Atlas Lens, an organization and blog dedicated to sharing stories and cartographic analysis with the mainstream.