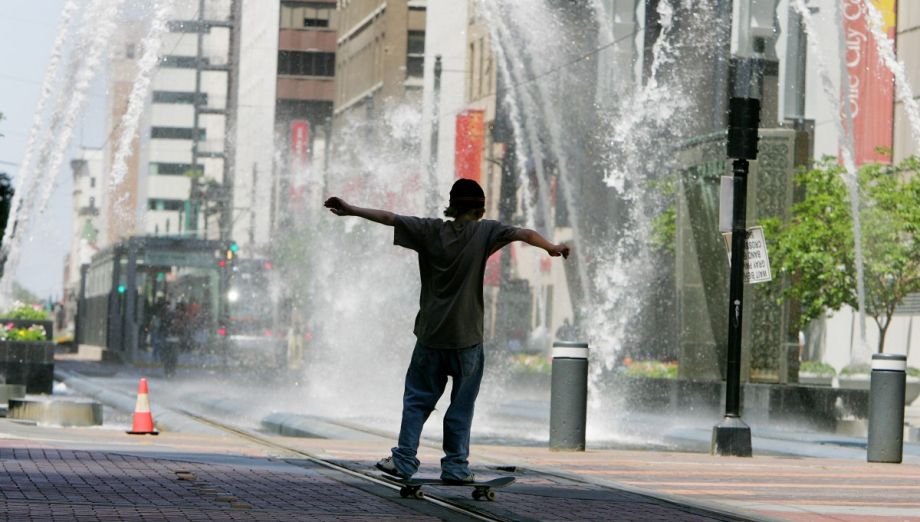 A skate boarder is silhouetted against the fountains that line the Metro train tracks in the Main Street Corridor in downtown Houston. (AP Photo/Ric Feld)

Build it and they will come. At least that’s what Houston City Council is hoping, after they unanimously voted last Wednesday to double down on tax incentives for developers who build downtown.

The Downtown Living Initiative offers developers a $15,000 tax incentive for each unit they build in a development of at least 10 units. The initiative, also called the 380 Program, was launched in August 2012 with a cap of 2,500 units. City Council voted last week to double that to 5,000. The tax incentives, according to the Houston Chronicle, could go as high as $75 million.

So while many people feel this might be a net loss for the city — that is a potentially large amount of lost money in tax revenue — Stephen Klineberg, a professor at Rice University and co-director of the Kinder Institute for Urban Research, feels it’s a necessity to create the kind of density the Central Business District needs. The developers aren’t building unless you give them a reason to.

“It makes a lot of sense,” Klineberg, who also helms the annual Houston Area Survey tracking demographic changes in Harris County, told me. “Developers need that incentive because it goes against every fiber of their being — which is you make money by building subdivisions and massive planned communities in the suburbs.”

Harris County was the fastest growing region in the U.S. between July 2011 and July 2012. But 80 percent of that growth was in the suburbs, according to the Houston Area Survey. Despite the stark numbers, Klineberg remains confident that downtown Houston has the potential to be a livable urban community, instead of a business district filled with nothing but tumbleweeds after workers head home to the suburbs at 5:00.

And, contrary to the popular myth, it’s not just Millenials moving downtown for the convenient trappings of a city. “There are an enormous numbers of empty nesters who are starting to say, ‘I work downtown, I love the ballet and the symphony and the museums. Do I want to have to drive for two hours every day? Do I want to have to keep mowing the lawn?‘” Klineberg said.

It’s important to take Klineberg’s anecdote here with a grain of salt. But it’s also worth noting that he does work intimately with the demographics and changing scope of the region. And he had some numbers from the survey to back it up. “A solid 50 percent of Harris County adults who when given a choice say I would prefer to live within walking distance of shops and my workplace,” he said, citing the annual survey. “Rather than a single-family house where I have to drive everywhere I go.”

University of Houston economist Steven Craig offered some sound skepticism of the potential costs to the Chronicle, saying, “Maybe we’re all willing to pay because downtown looks spiffier. That’s a political choice at that point. But as long as you’re clear that you’re not doing it to grow the economy, you’re doing it because you want a cool downtown. We all like cool downtowns. Just what’s the price?”

He’s right. These tax incentives aren’t going to magically create some new engine of economic growth. But they do have the potential to create more density where it’s sorely needed. And, in the process, shift the mindset of what living in Houston means.