After the Suits Leave, Another Hong Kong Economy Thrives – Next City

After the Suits Leave, Another Hong Kong Economy Thrives 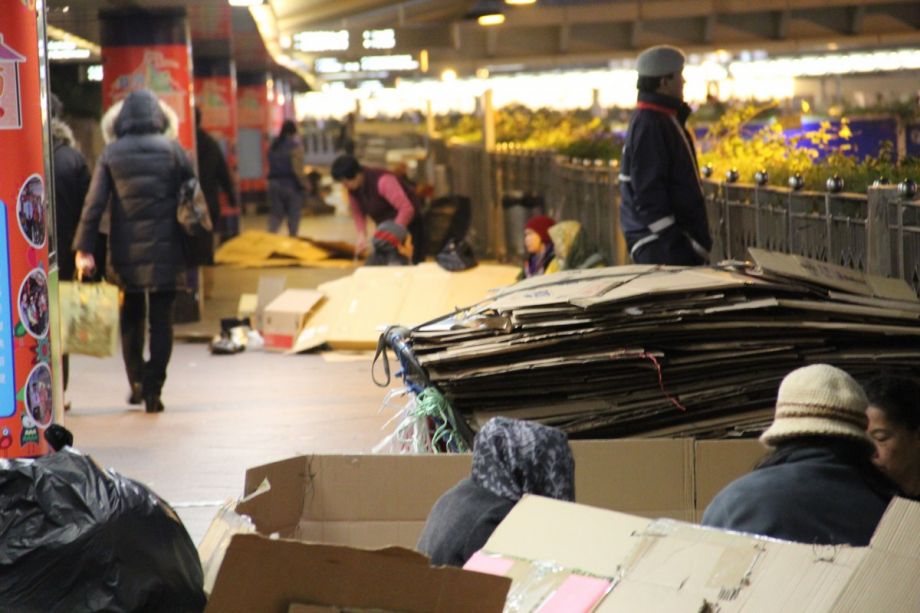 Hong Kong’s central business district, often simply called “Central,” has two distinct personalities. Monday through Friday, business people in gray suits rush about the neighborhood, which is on the north shore of the island and home to shiny high-rises and big-brand retailers. But on the weekends, the suits vanish and in their absence, an informal economy hums.

Central fills slowly on Saturdays and is brimming by Sunday with Filipino domestic workers — mostly women — who have been occupying the area on weekends since the 1990s. They construct temporary “shelters” out of used cardboard, escaping on their days off from their live-in employment as cooks, cleaners, childcare providers and more. Around this, an informal market has grown up: South Asian men sell cheap T-shirts, bags and shoes, and Hong Kong locals covertly sell jewelry. Many of the women provide services to their fellow domestic workers, from manicures to making coffee, to supplement their incomes.

Grace (not her real name) is one of them. A tough and fit woman in her 60s, she deals in a basic necessity of this weekend community: waste cardboard. Since the early 2000s, her and her group or workers have been forced to move only once, by the government, which Grace and her fellow entrepreneurs call “the Urban” — in order to clear the entrance area of a newly built bank. But while the threat of “the Urban” looms large, every Sunday for the last eight years, Grace and her trolleys piled high with waste cardboard have taken a spot on a pedestrian bridge that leads to a shopping mall.

Like many previous Sundays, when I went in the morning to see Grace there earlier this year, she smiled briefly upon seeing me, and then — as I am an adopted member of the group — with her usual stern face, she handed over several sheets of waste cardboard for building our home for the day.

She sells these cardboard sheets to her fellow Filipino workers for about 5 Hong Kong dollars (64 cents U.S.) a piece, depending on the size. The buyers use the sheets — flattened shipping boxes from luxury brand shops in the area, some stamped “Made in Italy” — to build their temporary shelters. On Saturdays and Sundays, in these “houses,” they gather to chat, eat, play cards, nap and conduct their side businesses. For her own group of workers usually numbering six or seven, Grace reserves pieces tall enough to give us privacy. As I spread a sheet open to make it stand, the wind made it flap like a dragon’s tail.

After 20 years in Hong Kong, Grace has learned sufficient Cantonese to negotiate with and convince waste cardboard collectors to sell in bulk to her. For these suppliers, it’s a better deal than selling to the recycling collection point. The collectors themselves go from shop to shop around Central to gather the cardboard — one of them, an old man with a bent back, appears with his trolleys around shops like Prada, Chanel and Gucci as soon as the first train arrives in Central. He then disappears with the last train out of Central.

Grace has a more easy-going weekday employer than many Filipino workers, and she has more control over her time. Unlike many others, she never has to do the week’s remaining chores in the morning of her day off, and she’s never had a curfew. The employer-employee relationship is one of two worlds colliding but not connecting. One worker told me that his employer buys paintings, but never puts them on the wall, just in storage. Another told me she has seen a picture of my artwork in one of her employer’s books. One woman told me her employers were a couple in the midst of a separation: They moved apart but couldn’t agree on who she should work for, so she ended up working for both households on a single salary. Referring to the grouping of cardboard shelters, another woman who is always cheery told me that to describe her weekends, she jokingly tells her employer that she lives “in a mansion in Central.”

Grace’s flexibility also meant she had time to perfect the cardboard trade. She gradually built a team of four women who not only distribute, but also recollect the cardboard pieces and sort them at the end of the day. They have secret spots where they park their trolleys, to stay hidden through the week, in obvious but somehow invisible places. These trolleys also sometimes got stolen. “A truck came, two men came out, cut the chain, and put the trolleys with all the cardboards on them in their truck,” Grace told me once, a week after Chinese New Year. “I was there and I saw it. But I just hid myself. I didn’t dare to stop them or say anything, of course.” It’s illegal for a domestic worker to “take up any other employment, including part-time domestic duties, with any other person.” Even for the collectors, selling the cardboards to the domestic workers like Grace isn’t straightforward. I met one who decided to stop selling one day after she was fined 1,000 Hong Kong dollars for her trolley’s “obstruction of public place.”

By the end of the day Sunday, thanks in large part to Grace’s crew, the pedestrian bridge will be empty. The gray suits on Monday might never know what happened over the weekend. “If we leave the area cluttered, the Urban won’t be pleased,” she said. “So if we still want to stay, someone needs to clean up.” Grace has also coached another team of two women who sell cardboard at the other end of the bridge. They still consult her for the best market price each Sunday.

That Sunday morning as I wrestled with the flying cardboard, Grace negotiated with a regular supplier she called “the curly-haired woman.” The previous weekend I had witnessed the deal-making turn into a verbal fight, with impassioned scribblings of contesting calculations on one of our cardboard walls. But this time, Grace quickly returned.

“The man died,” Grace said. “The man selling cardboard at that corner – he died.” This upset me. I knew that man, a local-looking man in his late 60s with an ascot cap. I’d always seen him selling cardboard on Sunday mornings right across from the air-conditioned, perfumed IFC mall entrance.

From a business viewpoint, Grace could have been happy to lose one of her competitors. Yet, that whole day she continued to talk about him: “He used to drink early. Even in the morning, when he came around and teased me, he used to smell like beer.”

“He was collecting trash when a bus hit him,” Grace said, when I asked what happened. “Last Friday. Maybe he was drunk.” I felt a terrible loss. I had bumped into the man at Hong’s recycling collection point just the previous Thursday.

Hong’s represents the next node in the cardboard trade route. Hong (not her real name), a short-haired small woman in her 50s, took over the business almost 20 years ago, when an older relative decided to quit running it. She manages it with her tall, placid husband. It is not an easy job.

Grace says Hong’s is a waste collectors’ favorite. I credit this to the owner’s friendliness: I’ve noticed her giving red envelopes to her clients, the waste collectors, on Chinese New Year. Grace credits it to Hong’s favorable buying price, fluctuating between 50 to 70 HK cents per kilogram of cardboard sheets.

From Hong’s, the next stop on the cardboard route is the port. This is where everything — numbers, weight and volumes — scales up massively. Hong’s small truck usually carries about 15 bales of compressed cardboards each time, weighing about 300 kg each, and delivers four times each day. Hong gets 1 HKD per kilogram of delivery. The company she deals with at the port is the busiest, handling deliveries from most recycling collection points in the city. Their forklift drivers are the quickest, and Hong’s busy recycling collection point is one of their biggest suppliers.

From there, the bales are either trucked or shipped to mainland China, where they will probably go to one of the six production bases owned by Nine Dragons Paper Group. Its chairwoman, Zhang Yin, was the richest self-made woman in the world according to Forbes in 2006. She’s made her fortune out of recycling cardboard waste into new cardboard boxes.

While hanging out at Grace’s “home” in Central, I would draw scenes from this trade route on our cardboard walls: the waste collectors, the transactions, the recycling collection points and the South Asian sellers. When I started drawing scenes from the port, Grace grew curious. Like the waste collectors and her buyers, Grace has never been to the port, the final node of the cardboard trade route in Hong Kong. Even her comparably flexible time still doesn’t allow her such access. “How much do they sell the cardboards at the port?” was her first question.