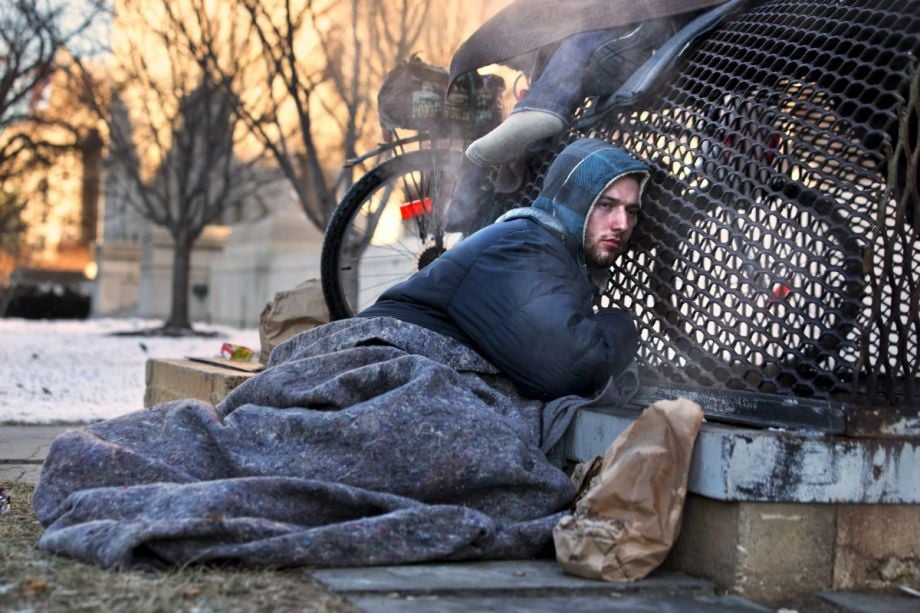 Strategies to end homelessness in cities vary wildly. Some municipalities lean to criminalization — cracking down on tent cities or banning panhandling in downtowns. Others embrace the housing first model, helping people into more permanent living situations in an attempt to avoid the cycle of on-and-off shelter life.

Robert Marbut is a homelessness consultant who criss-crosses the country positing an alternative model. For each city that hires him, he provides a custom plan, which often includes large-scale shelters (he advocates for the term “transformational campuses”) with onsite treatment facilities for underlying issues. He is the founding president of San Antonio’s Haven for Hope — the country’s largest campus of its kind. The complex sits on 37 acres of land, houses 78 nonprofit service organizations and has the capacity for 1,600 individuals on any given night.

Marbut has had his share of criticism. Many see his reward-and-punishment-based seven guiding principles from enablement to engagement as too harsh, and many also feel that the facilities he recommends keep urban homelessness problems hidden from public view. He’s also been a vocal opponent of food distribution programs, saying to myself and others, “Don’t mix the hunger issues of America with the homeless issues of America.” A recent Huffington Post article titled “How a Traveling Consultant Helps America Hide the Homeless,” tells a tale of Marbut in “homeless disguise” in Daytona Beach, “so he could embed with Daytona’s homeless people in order to understand their struggle to survive, if only for a few days.”

Whatever you think of his approach, cities are hiring him. His recent client list includes Fresno, California, and St. Petersburg and Pensacola, Florida.

I asked Marbut about some of his controversial views, his six-figure fees and how he thinks President Obama’s homelessness initiatives have been progressing.

What are some of the qualities shared by cities you think are the most successful at tackling homelessness?
The most important thing in successfully addressing homelessness is dealing with the root causes. The core causes of male homelessness are behavioral/mental health, substance abuse and job retention. When you get to females, you also have to add domestic violence. The cities that successfully address this say, ‘We’re going to figure out how to do this regardless of the federal government, regardless of state government, and we’re not going to wait for Santa Claus to come around to help us.’

The cities that don’t do well come in two flavors: Do nothing or NIMBYism. Do nothing can range from saying, ‘It’s not the government’s role,’ or being overwhelmed. Generally the biggest problem I see is NIMBYism.

Some end up doing a lot of gimmicky things that simply will not work in the long run. You might get a temporary bounce for two or three days or a week or two. That includes the criminalization. If you use ordinances to criminalize and you do not provide alternative services, you do not provide correct engagement. Those gimmicks don’t work. They make you feel good for an hour.

In the recent Huffington Post profile of your work, you were seen as being critical of the “housing first” model. Where do you see housing fitting in with your work?
If you look at any of the reports that I’ve ever written, for most communities, I give seven, eight or nine recommendations, of which one is sometimes a transformational center. [It is] a central service hub where you run activities, which deals with root causes. Then, you deal with supportive housing. Sometimes people call that housing first.

Are you recommending different strategies now than you did in the past?
We’ve gotten smarter in realizing that some solutions will work with a subset of individuals experiencing homelessness [and not others]. There’s sort of a one-size-fits-all mentality at the federal government level, which I find disconcerting. On the front line or on the ground, what you find that works for a veteran with post-traumatic stress is different than a single mom [affected by] domestic violence. The mom, in that case, is looking for security more than anything. The post-traumatic stress individual really needs mental health and behavioral services. They may be self-medicating in order to go to sleep at night. You have to customize those treatments not just by a group of individuals, but by the individual.

I’m pretty controversial, because I often say, ‘Having a home is not the problem for the homeless. It’s maintaining a financial stability that allows you to maintain your homestead.’ Don’t mix the hunger issues of America with the homeless issues of America. It’s really important if you want to address what the root cause issues of homelessness are, it’s not about food or t-shirts or suntan lotion.

How do you feel when people are critical of you as an outside consultant coming into cities, especially with your associated fees?
If there’s a major foundation who wants to pick up our travel and other costs — and do it so I could do it for free for anyone — I’d love that. I do this as my mission in life, but you have to pay for the flights and computers … I also do tons of pro bono work. I can’t afford to physically go to every city pro bono, but I do it through Skype and I was doing that just yesterday.

Secondly, the advantage of a consultant … is that I’ve been involved in a professional level in well over 100 cities. I’ve been to 694 cities as of last week. I’ve seen a lot that works and I’ve seen a lot that doesn’t work. Why would you want to replicate the mistakes made in other cities instead of working on national best practices?

I think the federal government needs to be a lot more practical about what really works in the field … . You need to have a sophisticated understanding of the triggers of homelessness. I know I get a lot of people mad at me when I talk like this, but it’s my passion and I truly believe in it.