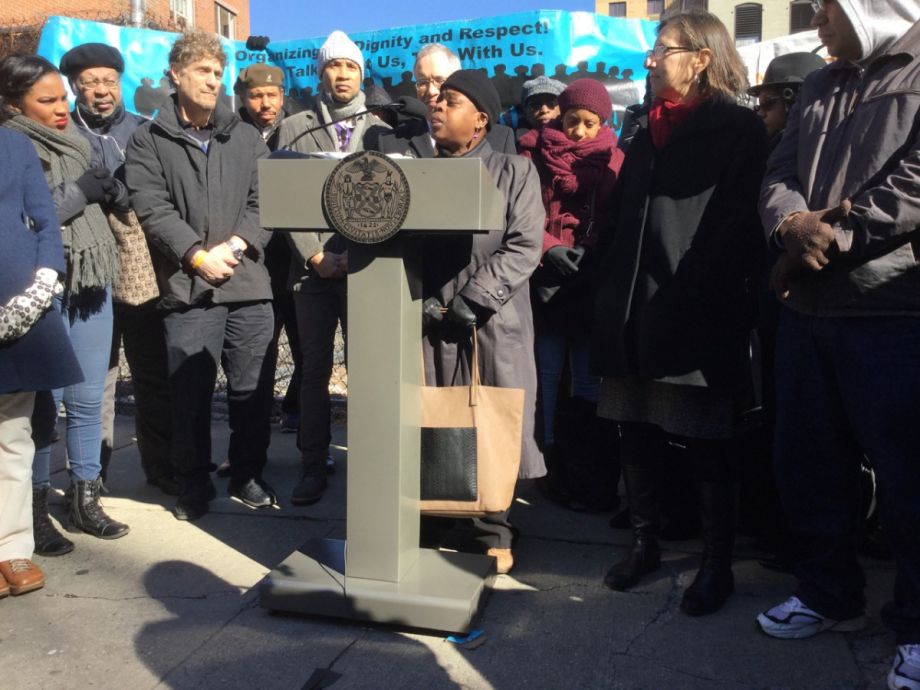 DeBoRah Dickerson, of Picture the Homeless, speaks at a February press conference while NYC Comptroller Scott Stringer (behind her) listens. (Photo by Oscar Perry Abello)

In 1971, the 26th Amendment lowered the voting age to 18. DeBoRah Dickerson, born and raised in central Brooklyn, remembers what it was like, having just turned 18 herself.

The next year, politics took on an even greater meaning for Dickerson. In 1972, not only was it the first presidential election in which she could vote, her representative in Congress, Shirley Chisholm, became the first major-party black candidate for president and the first woman ever to run for the Democratic Party’s presidential nomination.

As the first African-American woman in Congress, the fiery and fiercely independent Chisholm was already a legend in her historically black central Brooklyn district. In 1960, she founded the Unity Democratic Club, which was noted for mobilizing black and Hispanic voters in its heyday.

“I first got involved in politics at the Unity Democratic Club,” Dickerson remembers. “She was one of us. She stood behind her word, she stood behind the people. She had all her facts together. Being an educator, it was important to her not to miseducate others.”

Dickerson remembers meeting Chisholm. She remembers campaigning for her. Today, as a member of Picture the Homeless (PTH), Dickerson continues campaigning for many of the same rights and causes Chisholm championed — for social, economic and racial justice. PTH is a membership-based advocacy and research organization led by homeless and formerly homeless individuals.

Based in East Harlem, PTH was founded in 1999 by two homeless men living in Bellevue Men’s Shelter, “in response to the NYPD’s rampant violations of homeless people’s rights, as well as mainstream media demonization of homeless people.” Civil rights, regarding police treatment of the homeless and other municipal issues, remain a major focus for the organization. They supported NYC’s new municipal ID as part of their civil rights work, although the card does not yet currently bestow all the benefits PTH was fighting to include.

At least a thousand homeless or formerly homeless people from all throughout NYC have been involved with their various campaigns and projects over the years. PTH members may live in shelters, double up with friends and family, sleep on subways, in parks or public transit. Some have been unemployed or underemployed for the long term, some are juggling multiple low-wage or underground economy jobs, some are union members who have recently lost work, others are disabled or senior citizens. PTH holds monthly general membership meetings, every second Wednesday, during which campaign leaders report on progress and recruit fellow members for upcoming events or projects, or coordinate with PTH staff members on research tasks and other needs.

Dickerson first became a PTH member in 2005, when she was living in a shelter and looking for ways to be politically active. Around the same time, PTH members were organizing a campaign around vacant housing units in East Harlem, also known as El Barrio. After research, members noticed a pattern: Areas with the most vacant property were the same that sent the most homeless families into the shelter system.

“We made a plan to go out there and we counted vacant buildings, writing down addresses and taking pictures,” Dickerson recalls.

The work caught the attention of Scott Stringer, who was Manhattan borough president at the time. PTH worked with Stringer on their first vacancy report, “Homeless People Count”, which found that the total volume of empty housing units in Manhattan exceeded the number of homeless people in shelter and on the street citywide — 24,000 potential apartments in 2006. As a result of that work, then State Senator José Serrano proposed a bill, which passed, removing a tax loophole that allowed Upper Manhattan developers to hold vacant properties at a lower property tax rate than in the rest of the city.

Given the continued lack of good data on vacant properties in NYC, PTH organized another count in 2011, this time citywide. The resulting report, “Banking on Vacancy”, found 3,351 vacant buildings and 2,489 vacant lots in just a sampling of neighborhoods throughout the city, which could potentially house almost 200,000 people. Only 11 percent of the properties they counted were identified as vacant in data they received from NYC. More problematic: Only 10 percent of vacant property was publicly owned.

Stringer, now NYC comptroller, authorized an official audit of city-owned vacant properties, released this past February at a press conference featuring Dickerson and other housing and community activists.

“Don’t talk about us, talk with us,” Dickerson said at the press conference, quoting one of PTH’s mottos.

The comptroller’s audit identified 1,100 vacant city-owned lots, which could potentially contain 57,000 units of permanently affordable housing. Three-quarters of those lots have been vacant for at least 30 years. NYC’s Department of Housing Preservation and Development, the agency charged with stewarding city-owned property, claims the number of properties suitable for affordable housing is much smaller.

Dickerson says not only could vacant lots help meet the needs of the homeless, the homeless themselves could help build on them or rehab others, especially since some are former union construction workers.

“When I look at it, these vacant properties, that’s lemons, and us homeless people we can take those and make lemonade,” Dickerson says.